The Patriots lost their fourth straight game, falling to the Bills in Buffalo for the first time in a while, 24-21. The loss dropped the team to 2-5, more than the official 3.5 games behind Buffalo in the AFC East (because now are behind in tiebreakers, too). Up next is a horrible Monday Night matchup: Patriots (2-5) versus Jets (0-8).

(No doubt ESPN is searching their broadcast contract for a way out of that dog!)

As the game ended, Cam Newton fumbled with the Patriots in range for a tying field goal. It was heartbreaking after the team came back twice. But even though that was unforgivably bad ball security with a chance to tie the game, it was far from the only mistake.

The team committed multiple pre-snap penalties in the first half (false start, illegal shift, and delay of game), skipped one chance to get a TD before the half and settled for a field goal on third-down, and failed to recover an onside kick (good execution, better play by the Bills).

The Patriots just don’t have enough talent or continuity to make those kinds of mistakes. As you can see from the stat line, there wasn’t much to separate the two teams, but the Patriots just didn’t make specific plays when they needed to or shot themselves in the foot with untimely penalties. 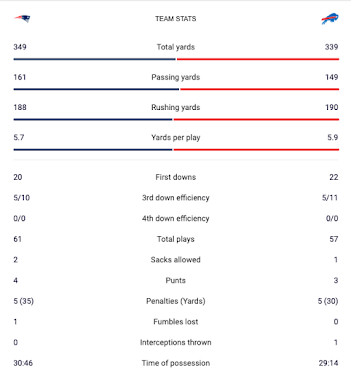 There were bright spots. Running back Damien Harris ran for 6.4 ypc and 102 yards overall. And Rex Burkhead had two absolutely huge runs on third-downs, when it looked like he’d be stopped short of the mark but Rex worked hard to make the extra yards and move the chains.
The offensive line largely played well, the two glaring problems being penalties that wiped out big plays.
Newton found some receiving rhythm with Jakobi Meyers (6 catches for 58 yards) and Damiere Byrd (3 for 39). Maybe it’s a good thing that Julian Edelman is on the shelf; it might open up opportunities for younger players.
The team continues to get run over on defense (over 200 yards yesterday). That’s how it is when you have zero linebackers you trust and play six- and seven-defensive backs. It makes it easier for teams to run the ball. But I suspect that is their plan; let teams run the ball but stop them for field goals and then score touchdowns.
That’s the plan. But yesterday the Bills scored 3 TDs and just 1 FG, and the Patriots didn’t score their first touchdown until the third quarter. Honestly, the last time that plan worked was in the Kansas City game, and the Patriots lost that one anyway.
The Pats only linebacker, Ja’Whaun Bentley, looked awful on Sunday; out of position, arm tackles that backs easily shed, blitzing to the wrong hole — he was a mess. He was easily outpaced by rookie Josh Uche, who could blossom into something; though it’ll probably too late to do much this season.
The secondary actually held up well. But they were undermined by the offensive ineptitude — and one really bad penalty of their own (a Devin McCourty neutral zone infraction that gave the Bills a free first down). They also ended up making a ton of tackles because the Bills RBs kept getting to the second level.
Overall the coaching should be beating itself up for their off-season failures. Knowing that Tom Brady was leaving, they should have simplified the offense so the receivers would at least have a clue where to go. Offense isn’t always about complexity and confusing your opponent. Teams like Pittsburgh ran the same simple offense for years and just out-executed the other team. The Patriots would be better than 2-5 if they’d gone simple and built from there.
Where does that leave us? Not a lot of options except to sell off some valuable pieces at the trading deadline. The team mostly needs to decide if the rebuild is for 2021 or 2022, trading players and getting draft picks to go with the plan they envision.
Biggest on-going issue: No offensive consistency. The defense held its own yesterday, but the offense couldn’t string together drives the entire first half.
Non-QB MVP: Harris, with a nod to the O-line and to Burkhead for keeping two drives alive.
Statistical oddity: Next Monday the Patriots and Jets will enter the game a combined 2-13, a 13.3% winning percentage. The last time the Pats played a game with such a low combined winning percentage this late in the year was December 12, 1993, when the 1-11 Patriots played the 1-11 Bengals, for a combined winning percentage of 8.3%.
(Trivia Question: Who was the Patriots head coach in that game? Harder Trivia Question: Who was the Bengals head coach in that game? [Hint: his dad was also an NFL head coach.] Answers below.)
Water-cooler wisdom: “We’re on to 2021.”
Keep the faith?
- Scott
PS. 2-5!
PPS. Trivia Answers:
V
V
V
V
V
V
V
V
V
V
V
V
V
V
V
V
The Patriots head coach that day was Bill Parcells. The Bengals were helmed by David Shula, son of Don Shula.

Loading...
"Not by might, nor by power, but by my spirit, saith the Lord of hosts." Zechariah 4:6
BEFORE IT'S NEWS ON TELEGRAM
GET THE TELEGRAM APP - https://telegram.org/ JOIN OUR CHANNEL - https://t.me/BeforeitsNews
Read it..
BEFORE IT'S NEWS
SIGN UP FOR OUR NEWSLETTER
Today's Top Stories
ABC, NBC, CBS, Fox, CNN, MSNBC to Lose Licenses, Trump Remains in Office, Inauguration Cancelled
Overnight, Trump Blindsides Democrats! Sends Shocking Letter to Pelosi & Authorizes Self-Destruct Disclosure!
Mike Adams: US Military & FEMA Will Save America at its Final Hour! +Video
Was Trump Already Inaugurated? (Video)
X22Report: Silent Running, What Happens at the Very End of a Sting Operation? - Must Video
Covert Operation To Takeover The USA Exposed By Military Intelligence! - Must Video
Situation Update, Jan. 15th, 2021 - Declass Begins, CNN Complicit in Capitol Raid! - Mike Adams Must Video
Conservative Voice: Special Forces Will Move Quickly To Take Over Traitors! Chris Miller Could Take Charge
Scott McKay Patriot Streetfighter Post Election Update #23: MILIntel Indicating Imminent Nation Lockdown
Lin Wood Fireside Chat 8 part 3 - | War W/ China? Pence Treason? Action? (PART 2-Obama Proof)
Loading...
Featured
Dr. Steve Pieczenik Interview: Trump Will Remain President - Pelosi, Biden, et al. Will Be Arrested - Former Senior State Department Official Right About Clintons in 2016
Navy Seal Michael Jaco: Is a Fake Flag in the Works for D.C.? Misdirection as DUMBS Are Being Destroyed Under D.C.! - Must Video
Republicans Finally Fight Back as Nancy Is Humiliated on House Floor! Democrat Narrative Is Crumbling! - Must Video
Friday’s Video: Cancelling People Because of Politics
Benjamin Fulford: US Election Outcome Jan. 20th and Beyond
Baseless Conspiracy Theories Without a Shred of Evidence
Never Forget: Democratic Attacks, Assaults, Threats on Republicans
CNN Colluded With Antifa/BLM Leaders to Incite Capitol Siege
Vaccination Credential Initiative: Big Tech Tackles Vaxx Passports
Trump Declassifying Everything! Government & Hollywood Pedophiles & Traitors! Everything Exposed! - Must Video
Loading...
Top Global
The Brussels Riots: Follow-Up
23 Dead in Norway After Taking COVID Vaccine
What Is Happening Uk Send All Of Its Navy In The South China Sea
America's Top Owner of Farmland: Bill Gates -- In Control of Food
Inauguration Cancelled, Trump Remains in Office, ABC, NBC, CBS, Fox, CNN, MSNBC to Lose Licenses
Alert! Report COVID-19 Vaccine Injuries Occurring
But, we cannot talk about the fight against globalist oligarchy without also acknowledging that the political left is the weapon the elites are using to maintain and expand that oligarchy.
Coronavirus Injected Into Cat - Federal Government Injecting Cats With Coronavirus
“If you say its a vaccine you have already lost the battle”
Palestinian/Israeli update 01/14/2021..IDF engineers shot at in buffer zone; IDF retaliates on Hamas positions
Loading...
Top Alternative
Project Veritas Exposes Twitter CEO Jack Dorsey Through Whistleblower (More Censorship on the Way)! - Must Video
1000's of Additional US National Guard Just Arrived at the US Capitol With Gear! - Must Video
Real Disclosure! They Were Here Before Us & Come From Inner Earth
The Irish Origins of Civilization… The Druid's Influence
This Is How Chemtrails Are Being Normalized & Made to Look ‘Cool’! - Must Video
UFO Disclosure Bombshells! US Intelligence Agencies Release UFO Docs
Chuck Missler: Biblical UFO's and the Coming Deception
“If you say its a vaccine you have already lost the battle”
SpaceX returns to Starship program roots with new ‘test tank’ prototype
Father James Martin connects Catholic leaders to Capitol riots; Bishop Stika unimpressed