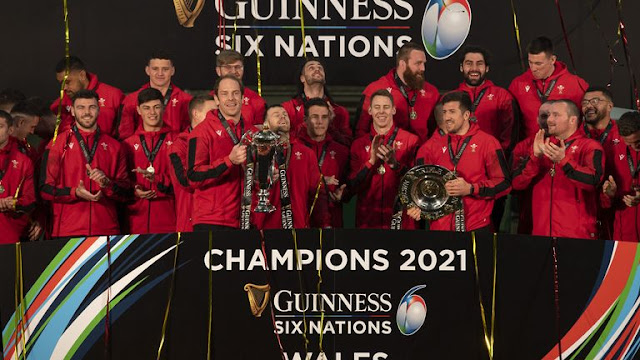 Another close, dramatic game (of which there have been a number this year) brought the 2021 Six Nations to it conclusion of Friday night in Paris.

The ending was somewhat surreal – Brice Dulin choosing not to kick the ball dead in overtime as he sought to give his team the opportunity of a bonus point fourth try which would have made no difference whatsoever to the final standings, instead handing Scotland the possession that ultimately led to the winning try.

For France, therefore, a season that promised so much ended in a dispiriting defeat, whereas Scotland started and ended the tournament on a high and can conveniently forget what transpired in between.

Both teams appear to be on the up, however, although talk of France being the best in the world – which is what many a pundit has been saying – is, for now, quite wide of the mark.

And so Wales take the title and deservedly so – yes, they rode their luck early in the competition, but improved with every game and ironically were at their best while suffering their only defeat in Paris last week.

Ireland, too, can be pleased with their progress. As for England, enough has been said already and let’s just draw a veil over the Italians, shall we?

Team of the Tournament?

15. Stuart Hogg – benefitting from his time at Exeter and now looking the full package.

13. George North – re-born as an outside centre

10. Mathieu Jalibert – what a talent

1. Wyn Jones – solid scrummaging and an absolute pest at the breakdown

3. Tadhg Furlong – for those sidesteps alone

4. Tadhg Byrne – where have Ireland been hiding him?

5. Alun-Wyn Jones – defying his years and leading from the front

6. Tom Curry – one of a very few English players to enhance his reputation

8. Taulupe Faletau – back to his best and a Lions shoe-in.

In previous years I have chosen a “Chumps” team of the tournament. Not this year – collectively the Italians clearly have major issues although individually it is difficult to single any particular player out. For England it was pretty obvious that a number of players – many of them Saracens – were well below par and would therefore feature in any Chumps XV, while there were a number of red cards dished out to players for contact to head which cost their teams dearly and would almost certainly have earned the perpetrators a place in the team. You all know who they were…