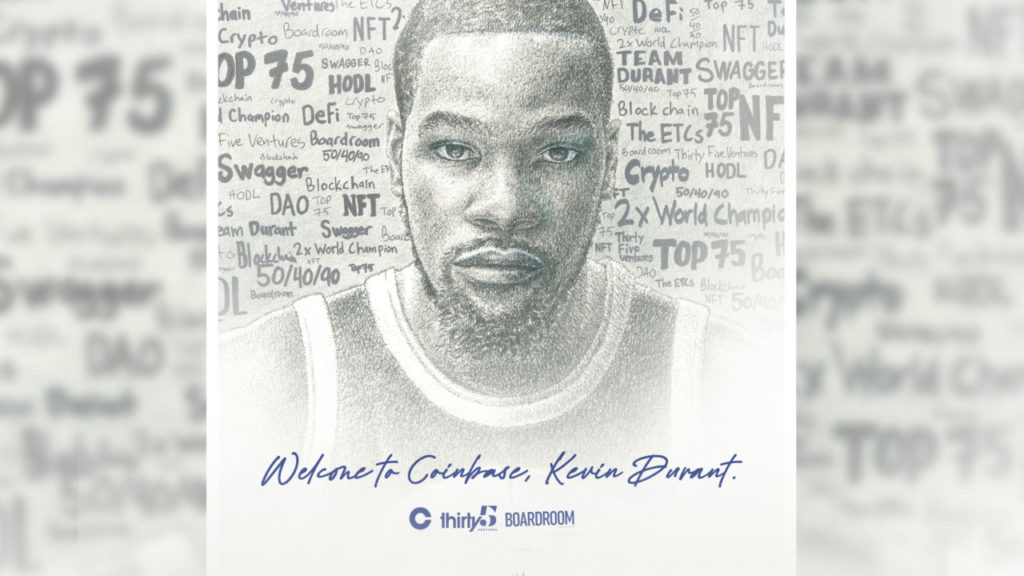 The agreement includes adding Durant as a collaborator, Boardroom as a media partner, and a philanthropic integration with the Kevin Durant Charity Foundation (KDCF). Thirty Five Ventures will work with Coinbase across several strategic paths, from creating NFT drops to storytelling and content around how crypto empowers everyone, NFT education, and highlighting Coinbase’s rapid growth in the industry. Durant and 35V will help unlock creativity and highlight Coinbase’s artist- and creator-first approach to the NFT marketplace.

Coinbase CEO Brian Armstrong first connected with Thirty Five Ventures in 2016. 35V participated in Coinbase’s 2017 Series D funding round that raised $100 million at a $1.6 billion valuation, as the company was on its way toward becoming a household name, 35V co-founder and CEO Rich Kleiman said. Then, Durant became regularly associated with Coinbase as the company continued to grow.

The two companies will now double down on their partnership, centered around Durant and Thirty Five Ventures’ shared excitement and early investment in the crypto space.

And the space is rapidly growing. Coinbase’s trusted and secure platform boasts more than 73 million verified users as cryptocurrency grows in cultural relevance, along with the metaverse and web3 technologies.

“Historically, premium has meant brands that have been around forever, like Mercedes, Rolex and American Express,” Kleiman said. “But in five years, Coinbase has become representative of that era and is in line with our premium brand philosophy. And we’re getting into this formalized agreement with a company that is just scratching the surface on where it’s going.”

“Being an early investor in a company you’re excited about is always an amazing feeling,” Durant said. “Being able to come back a few years later and create an even more in-depth partnership is rare, and we’re fortunate to be building further with Coinbase.”

“Kevin is a perfect partner for Coinbase because he is genuinely experienced and excited about crypto,” said Kate Rouch, Coinbase’s chief marketing officer. “He is a builder and embodies an entrepreneurial spirit that we look for in our partners. His authenticity will be critically important to helping us reach millions of fans around the world.”