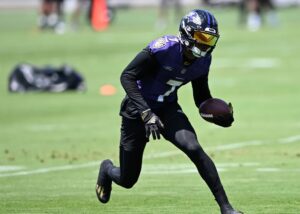 It felt like a seasonal rebirth at M&T Bank Stadium Saturday night as the Ravens hosted an open scrimmage in front of an announced crowd of 26,417, delighting the masses with some offensive fireworks on the field, and an elaborate firework and laser show following practice.

For the second straight session, Lamar Jackson, Mark Andrews and Rashod Bateman performed well. But there were some other performances during the night session that stood out this time.

• Jordan Stout, the rookie punter out of Penn State, started things out on the night, and he was as impressive as the Ravens have touted him to be. He put several punts inside the 5-yard-line, with the ball snapped from the defensive side of the field. When things started out at the 50, Stout dropped one on the 1-yard hash and wowed the crowd as it spun sideways out of bounds. His next punt went out of bounds on the opposite side of the field at the 2.

• Jackson has impressed with his accuracy and zip, but he’s also showing great decisiveness hitting his back step, planting and firing. If he can hit those quick crossers, slants and curls against aggressive defenses this year, this offense could really cause problems. It feels like him and Andrews are nearly impossible to defend on those short timing routes.

• Bateman probably made the play of the day, hauling in a beautiful pass from Jackson that would have gone for a 45-yard gain. Kevon Seymour had good coverage on the play, but Bateman showed every bit of his exciting potential with the catch.

Lamar going deep to his WR1

: Back Together Saturday on @nflnetwork pic.twitter.com/hJ0JUQROg9

• James Proche also got a deep pass off Seymour, but it was a different variety, as Proche beat him badly off the line and was wide open for the long gain.

• It was a good night for the undrafted rookie free agent receivers, as Bailey Gaither, Slade Bolden, Shemar Bridges and Devon Williams all made plays. Williams nearly made the catch of training camp with a one-handed snag in the end zone, but he wasn’t able to come down in bounds. Gaither had a big gain when he shook free from rookie safety Kyle Hamilton for a deep gain.

• Jaylon Moore also stood out, making several catches, including one over Robert Jackson that drew a loud reaction from the crowd. Moore impressed some during last year’s camp, as well, and has some interesting skills.

• Rookie defensive tackle Travis Jones stood out on the night, particularly in pass-rush drills. He’s big and athletic and plays with an obvious aggressiveness. Michael Pierce gushed about him after practice, saying that once Jones cleans up his technique, he’s going to be a problem for the league.

• Brent Urban had a few nice moments, busting through on one snap for what could have been a sack, and then swatting down a pass a few plays later. Him and Calais Campbell are just large, large human beings on the line.

• Tylan Wallace had a nice night, too, notably beating David Vereen for a big gain on one rep.

• Denzel Williams, a rookie corner out of Villanova, has stood out a bit each of the last two practices, and he made a very nice play on a deep pass attempt to Shemar Bridges with a great pass breakup. He’s someone to keep an eye on, I believe.

• Marlon Humphrey had a great rep against Bateman on a deep route, using the sideline to give Bateman no air. It showed why he is so good when he is on top of his game.

• You know who had a nice night? Justice Hill. He had a great blitz pickup against Jalyn Armour-Davis, and caught a pass on another play in traffic that looked like he would have juked his way in for a score. Hill is kind of a forgotten man in the running back room, but he has looked explosive the last two days in practice.

• Patrick Queen looked very good on blitzes. He would have destroyed one play if they were allowed to hit, and it was just another reminder how good he is running forward.

• The deep pass from Jackson to Bateman will probably get the headlines, but there was another connection in red-zone drills that was equally impressive. Jackson was pressured, got out of the pocket, and fired a bullet to Bateman in the back of the end zone, and the receiver made a nice catch hauling it in. This just looks like a good combination.

Tune into our live show on our channels and #BackTogetherSaturday on NFL Network! pic.twitter.com/3mixo2FkNP

• Chuck Clark almost made a tremendous interception off a pass from Jackson to Devin Duvernay as Clark showed great range coming over to get his hands on the ball. The two did have a collision that knocked Duvernay out for the rest of the practice, but Coach John Harbaugh said after practice ended that Duvernay only suffered a bruise.

• Nate McCrary made a terrific catch on a pass from Anthony Brown — a fade in the end zone with a defender all over him. I wish I could have identified the defender because he was in good position, but I just didn’t have the angle.

• Humphrey showed his patented “Fruit Punch” when he knocked a ball out of Mark Andrews’ hands after a short reception. Humphrey had a good all-around night.

Loading...
"Not by might, nor by power, but by my spirit, saith the Lord of hosts." Zechariah 4:6
BEFORE IT'S NEWS ON TELEGRAM
GET THE TELEGRAM APP - https://telegram.org/ JOIN OUR CHANNEL - https://t.me/BeforeitsNews
Read it..
BEFORE IT'S NEWS
SIGN UP FOR OUR NEWSLETTER
Today's Top Stories
New Clif High: Dread 10-4-2022
JFK Jr. Is Still Alive And Is Spotted At Trump Rally... AGAIN??!! Stunning Photo Evidence!!
Situation Update, Oct 4, 2022 - Russia Deploys Doomsday Nuclear Ocean Drones As Global Economic MELTDOWN Looms! - Mike Adams Must Video
New Kerry Cassidy & Sean David Morton: Latest White Hat Info - Prophecy for the Coming Days
BREAKING: US Nuclear Forces On HIGH Alert! US Looking Glass Plane Is Airborne! DEFCON Elevated! - Canadian Prepper
Deep State Checkmate Getting Very Close! Doomsday Sub Has Left Port! In Chess, This Is Check! - On The Fringe
NATO Just Called Putin's Bluff & It's About To BACKFIRE Bigtime! - Redacted News
Big Time GITMO Update with Spaceshot and Linda Forsythe
Things That Can't Be Seen Anywhere But In Japan
Trump Has The Whole World In His Hands #WWG1WGAWW (First published on March 17)
Loading...
Featured
Karen Kingston Provides Evidence Jab Contains Military-Grade Technology And Can React To 5G Towers!!
Reviving Red Blood Cells After Covid vax.
There’s No Doubt There Will Be More Pandemics Because They’re Intentionally Creating Them
mRNA ExperimentalTechnology In 45% Of Vaxxed Mothers!! Alarming Reports Of Babies Mysteriously Dying Following Being Breast Fed By Just-Vaxxed Mothers Continue To Flood VAERS
The situation in the Ukrainian SMO on October 4 2022
Big Time GITMO Update with Spaceshot and Linda Forsythe
What's In One Drop Of Pfizer? Scientist Shows You What He Sees In His Microscope And What They Don't Want You To Know!
16 Hidden Horrific Agendas Of The Jab... Depopulation, New Species, New Technology, Genetic Alteration, Biomarkers, 3D Mapping,Tracking Device, 5G Hookup, Extraterrestrial Hybridization, Permanent Slavery, Much More... And NOTHING To Do With Improving Health And Immunity!!
The Worm in the Apple ( or Why the World is the Way it is)
New Dark Outpost: Trump Will Be Arrested - White Hats Corruption - Juan O Savin Is not JFK Jr.
Loading...
Top Global
Charlie Ward: US Treasury Audit, Global Currencies, USTN, Krackin, OPEC, Evergrand (Video)
She Was a Pro Vaccine Nurse but Then She Was Injured by a Flu Vaccine - She Is Now Speaking Out (Video)
Nuclear October: Final Standoff, New Earth Manifesting- Buckle Up It's About to Go Live!! (Video)
The situation in the Ukrainian SMO on October 4 2022
Big Time GITMO Update with Spaceshot and Linda Forsythe
Dramatic Moment For Russia: Military Airport Was Blown Up! Crimea Is Burning! - Must Video
Former Pentagon Advisor: Nord Stream Pipelines Likely Attacked By US To Isolate Germany
8 Steps To Cancelling Your Illegal Mortgage and Claiming Indemnity From The Land Registry
New Anonymous: [Classified] "You Will Be Surprised" - They Don't Want This Out
X22Report: [Deep State] Red October Comms! Regain Power By Any Means Necessary! [Scare] Necessary Event! - Must Video
Top Alternative
Judgment Day: Four asteroids to fly past Earth on Yom Kippur - NASA
Vaxx materials and the genocidal nature of the climate movement: Links 2, October 4, 2022
False Thought Patterns of the Catastrophists
Saturday Night Live's Victoria Jackson Joins Bradlee Dean (Video)
Trump update 10/04/2022..Maggie Haberman says Trump Wanted To Dress Up Like Superman After Leaving Hospital With COVID
8 Steps To Cancelling Your Illegal Mortgage and Claiming Indemnity From The Land Registry
Bangladesh’s Power Grid Collapses
We Are Not the Government, but America Is No Longer Anything More than the Government
Good News: UN Working With Google To Silence Skeptics
President Trump Gave Up Everything! He is The Man in The Arena! Do It Q! MUST WATCH!! (Video)