By Towards A New World
Contributor profile | More stories

Deaths have only gone up by 6 people in the last month or so, but cases?

Almost 500 more in the last 4 weeks, so over a hundred cases per week again, which we haven’t had since early August. Deaths follow spikes in cases, though treatments are better. Still, I expect Thanksgiving thru Xmas to show an elevated death rate.

It was all over social media and national broadcast news that doctors and nurses are reporting that they have patients complaining that Covid-19 is a hoax from their deathbed!

Now, let’s contemplate the level of stupidity that takes. I don’t think we really fully appreciate how many stupid people there really are in the world until something like this comes along. Also–? We don’t appreciate how a liar with a little status can convince those stupid people of obvious lies. A meme going around Facebook is a quote from George Carlin (in my top 3 comedians of all time) that says, “Now just think of the average person and how stupid they are– and realize that half the population is STUPIDER than that!”

Speaking of propaganda and stupidity–!!

Facebook banned me from posting “live” for 30 days for posting a quote from the infamous Nazi propagandist, Joeseph Goebbels, who said that their propaganda department didn’t bother trying to persuade tthe intellectuals, who would likely bow to the pressure of scary people and that’s all they needed. Now, you would THINK that this is making a pertinent point that today’s stupid people are falling for propaganda, and you know– HELLO!? But their bots saw a Nazi dude and did this.

I contested because with CONTEXT, it’s obvious I’m against both Nazis AND propaganda. But I lost the review, because… I don’t think they’re actually reviewing. I think they just saw the Nazi flag in the meme pic and said “NOPE!”

So I posted about the censorship (which is often justified on Facebook, which is a private company and not a governmental service) instead, and that was not fucked with, but OMG. 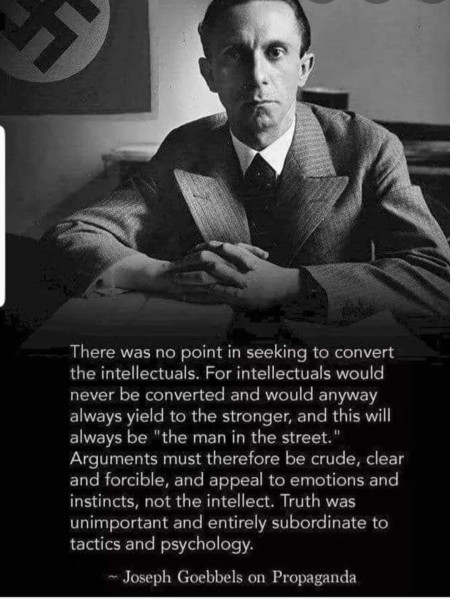 I honestly wouldn’t do Facebook if I knew I’d lose touch with a TON of people. It’s the only reason I joined– to keep contact with great co-workers from Michael’s Arts N’ Crafts. And now I’m finally getting contact with some relatives through it. It’s handy for that.