USA –  -(AmmoLand.com)- This weekend, we celebrate the birth of the greatest enterprise in the history of mankind, the United States of America, and our ancestors’ brave decision to fight for their freedom from British oppression. That fight was led by George Washington, but sadly, the mobs of violent protestors who recently debased statues of our first president and founding father despise him and the nation he built.

The Fourth of July observes one of the most seismic shifts in human history. Before the Declaration of Independence, mankind was divided into nations by ethnicities and tribes. The Founding Fathers gave birth to a new type of nation.

As G.K. Chesterton wrote, “America is the only nation in the world that is founded on a creed… It enunciates that all men are equal in their claim to justice, that governments exist to give them that justice, and that their authority is for that reason just.”

The miracle of the American experiment was not the result of a natural sequence of events. An exceptionally virtuous and educated cadre of statesmen broke away from the politics of millennia and created something new. Only by this political miracle do Americans enjoy our freedoms.

It is on the virtue and sacrifice of the founding fathers and the numerous men and women who carry on their legacy that America is still free today.

It should be no surprise that George Washington receives such a special vitriol from the lawless mobs, as he was the paradigm of our founding fathers. Under Washington, the rights to life, liberty, and the pursuit of happiness were realized. He mobilized volunteers to enforce our rights against the world’s preeminent superpower. His soldiers and ragtag militiamen routed a king’s army and navy.

Yet, when Washington’s power reached its maximum, he gifted it away. By the time Washington became president, this was the least impressive item on his résumé. But even in that endeavor, he set the gold standard for statesmanship. Washington again voluntarily relinquished his power after two terms in office, inaugurating a foundational democratic principle that has lasted centuries.

To this day, American citizenship remains the most valuable privilege anyone can possess. American citizens enjoy protection under the rule of law and the right to live in a society where anyone can pursue the American Dream—brought to you in part by Washington himself. As just a small tribute to his immeasurable contribution to the nation and the world, our capital and the tallest structure in it are named for him.

However, his role in shaping this country is precisely the reason so many hate him and want to expunge our cities of this champion of liberty. In Portland, Oregon, a violent mob recently draped an American flag over the face of a George Washington statue, toppled it, and set it on fire. No American should loathe the man who ended monarchy. No “de-colonizer” should diminish the first—and most successful—revolution against colonialism.

The violent mob is not worthy of even polishing Washington’s statue, let alone desecrating it. But they don’t stop there. In a bizarre turn of events, they have also vandalized statues memorializing abolitionists, Union soldiers, and Ulysses S. Grant.

They even threaten a 19th-century statue of Abraham Lincoln that was dedicated by abolitionist leader Frederick Douglass and financed by donations from freed slaves. These heroes ended slavery and knew racial oppression more intimately than modern-day rioters do. Their only crime is not submitting to the standards of the woke mob sometimes more than 100 years after their time.

In contrast to peaceful protestors exercising their First Amendment rights, violent protestors defiling statues are no better than the looters and rioters who ransacked hundreds of small businesses, many of which are owned by minorities, across the country under the guise of racial justice protests. But the symbolic destruction of monuments benefits nobody and only robs future generations of Americans of the ability to pay their respects to our country’s great leaders.

When we wash away history, we wash away inquiry, and we wash away the truth. But it is truth, transparency, and debate that increase our understanding of what is right. Good people must not stoop to the mob.

Some in the mob worship a statue of Vladimir Lenin in Seattle. Lenin represents untold repression, ethnic cleansing, and the mass killings of millions of his countrymen. Let it stand as a testament to their self-contradictions and a memorial to the historical evil that Lenin and his modern-day successors represent.

And when someone tries to desecrate a statue of the guardians of America’s foundational principles, make no mistake: they attack America itself. Police must protect public property. Prosecutors must punish perpetrators. Politicians must neither placate nor patronize these pillagers. 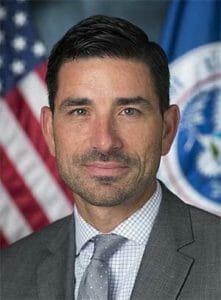 President Trump has led a firm response to the lawlessness sweeping our nation. The Department of Homeland Security is following his lead in deploying special units to defend our national treasures from rioters. Rest assured, we will leverage every tool and authority in our arsenal to make sure these landmarks remain intact for our grandchildren and great-grandchildren to learn from so they can carry on America’s great legacy.

Chad F. Wolf is the acting secretary of the Department of Homeland Security.

The post Homeland Security Chief: To Attack Our Monuments Is To Attack America ~ VIDEO appeared first on AmmoLand.com.

Source: https://www.ammoland.com/2020/07/attack-our-monuments-is-to-attack-america/
Before It’s News® is a community of individuals who report on what’s going on around them, from all around the world.

Loading...
"Not by might, nor by power, but by my spirit, saith the Lord of hosts." Zechariah 4:6
BEFORE IT'S NEWS ON TELEGRAM
GET THE TELEGRAM APP - https://telegram.org/ JOIN OUR CHANNEL - https://t.me/BeforeitsNews
Read it..
BEFORE IT'S NEWS
SIGN UP FOR OUR NEWSLETTER
Today's Top Stories
Horrors of Bill Gates Covid-19 Vaccine and Jeffery Epstein Link
Best & Taylor Intel Review Hour (8/1/2020): Important & Amazing News in the Matrix — Obama Prophecy — Brace Yourself
The Act of 1871: The “United States” Is a Corporation – There are Two Constitutions
4 Horsemen of the Apocalypse: Is the Red Horse Here? Mind Blowing Reason Why COVID Vaccine Volunteers Are Not Allowed to Have Sex or a Baby! (Shock Video)
New Update! Grey-Haired Obama Oozes Panic! Rogue Governors & Congress Play Dictators! - Great Video
It’s Gonna Blow
We've Been Stationed on the Moon Since 1988, There's a Reason It's Kept a Secret via Creepypasta
Dutchsinse (8/1/2020): Massive fires break out along San Andreas Fault in California — Apple Fire
The Watchman: End Times Signs, Everything Is About to Change, Unprecedented World Events
Satan Creating his Satanic Nephilim Army via Israeli Live News
Loading...
Featured
X22Report: Message Received, Something Big Is About To Drop, The Enemy Is Being Exposed!! - Must Video
The antiChrist Has Arrived! Great Video and the Calculation of the Number of the Beast Six Hundred Three Score and Six As Per Revelation 13:18.
Epstein's Long Lost Girlfriend Doxxed: Her Pet Name Was 'Chocolate Sauce' and She Writes Children's Books
Be “Perfect Victim”, “Do as They Say” - Minneapolis Govt Advises Citizens to Surrender to Criminals, Turn Over Your Valuables, Don’t Resist
X22 Report: Do You See How it’s All Coming Together, Drip, Crimes Against Humanity, Drip, Treason!! - Must See Video
X22Report: Here it Comes, Trump Just Kicked it Off, Tax Holiday? - Great Video
Weather Warfare Alert! Hurricane ISAIAS Strange Activity Update / Rapid Explosion in Size via The Real BPEarthwatch
Trump Turns Blind Eye To Antifa Funding & Training Camps
Tucker Carlson calls out Fauci for the fraud he is
Freedom Parade Berlin: 1,300,000 Germans Protest Covid Pandemic! - Video
Loading...
Top Global
US-China tensions rising - The USA gave China 72 hours! Houston consulate closed
Sweden: 12-Year-Old Girl Shot Dead
Freedom Parade Berlin: 1,300,000 Germans Protest Covid Pandemic! - Video
Horrors of Bill Gates Covid-19 Vaccine and Jeffery Epstein Link
Dutchsinse (8/1/2020): Massive fires break out along San Andreas Fault in California — Apple Fire
2mins of absolutely ESSENTIAL VIEWING
How Many Patents Does Dr. Anthony Fauci Hold?
First wave. Second wave. Or no wave at all?
Coin Shortage Conspiracy: War with China Imminent
What the MSM Was Afraid to Tell You
Loading...
Top Alternative
Minneapolis Police: Be Prepared to Be Robbed
AOC on Why Saint Damien Statue Is Racist
When People Talk About the Gates Of Hell They Are Referring to Bill Gates.
Ratings Crash for NBA, MLB After Pathetic Protest-Filled Debuts
COVID Fudging Data Openly By Bad Actor States, 10 States Analyzed
A Vaccine May Not Be the "Magical Cure" Everyone Anticipates
The Real Epidemic is Black Violence
How Globalists Plan to Use Covid to Reset the World Economy! - Great Glenn Beck Video!
RichiefromBoston: Illuminati Highlander, Powers and Principalities, Prince of the Air
An Elite Control Mechanism right out in The Open [Video]