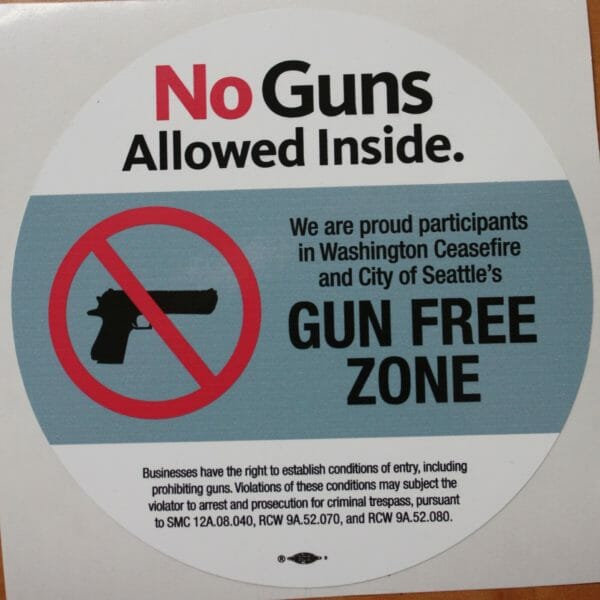 Seattle Ice Cream Shop Flap: Is It a ‘Cop Thing’ or a ‘Gun Thing?’

U.S.A. –-(AmmoLand.com)- The owner of a Seattle-based ice cream shop chain is making headlines for posting her shop off-limits to armed police officers, which some people are interpreting to be anti-cop, but careful examination of her remarks to reporters suggests this more about guns than the people who carry them on the job.

According to KOMO News, the ABC News Seattle affiliate, Molly Moon Neitzel has posted a sign in the window of her Molly Moon’s Homemade Ice Cream shop on the city’s Capitol Hill, the scene of a recent 16-day occupation by protesters demanding defunding and abolition of the police department. While a six-block area became known as the “CHOP” zone (for “Capitol Hill Occupied Protest”), and police officers were essentially kept out of the area, crime reportedly went up, including assaults, rape and shootings that claimed two lives and left others wounded.

Moon Neitzel told reporters her shop has always been a so-called “gun-free zone,” but she has now made it clear that applies to police officers as well as legally-armed private citizens. There are eight Molly Moon’s shops, but only the one on Capitol Hill has the sign advising police officers to leave their guns outside. In reaction, social media posts have called attention to the controversy.

According to Molly Moon’s website, “Our mission is to make the world better, one scoop at a time as a multigenerational gathering place with sustainability and happiness at the core of all we do.”

The business donates more than 20,000 gallons of milk to food banks annually, and “at least” 10 percent of profits goes to food banks, equity organizations, and women and girl empowerment initiatives, the website notes.

Last November, Molly Moon’s was honored with an award for being an Outstanding Philanthropic Small Business.

She encourages employees—referred to as the “mooncrew”—to be registered voters, to donate to Jaime Harrison, who is challenging veteran South Carolina Republican Sen. Lindsey Graham this fall, and to do volunteer work for organizations in the Seattle area.

On November 7th, in honor of National Philanthropy Day Molly Moon’s was honored with the award for Outstanding Philanthropic Small Business.

While the print version of KOMO’s story quotes Moon Neitzel stating, “It’s awful that I fear for the health of my business – which is already on the brink – because of the pandemic. Now I fear for it because folks from out of state are threatening me on Instagram because I don’t want them in my ice cream shop,” a careful playback of the actual video reveals she really said this:

She also said at the end of the KOMO report, “I hope that police officers see our sign and that that’s enough, and that they come back without their guns.”

She told KCPQ News, the local Fox News affiliate, “If they want to come into my shop and buy ice cream without a gun, they are welcome.”

Those remarks suggest strongly this isn’t a “cop thing,” it’s a “gun thing.”

As reported by KOMO, Moon Neitzel said police officers are welcome so long as they are not armed.

“I would say finish your shift,” she stated, “go home, take a shower, have dinner with your family, and please come to Molly Moon’s and get some ice cream. Everyone is welcome.”

Except that everyone apparently isn’t welcome. Anybody who carries a sidearm on the job, or is exercising his or her right to bear arms under the state and federal constitutions evidently isn’t welcome at all.

According to Eater Seattle, Moon Neitzel alleged the sign “was in response to an incident in which a businessman from California came into the Capitol Hill store on Friday and ordered $500 worth of ice cream specifically for local cops who have been patrolling the area, then alerted officers to pick it up at the store.”

This allegedly brought several officers to the ice cream shop “which put the staff, who were wary of the presence of so many armed officers, in an uncomfortable position.”

She also asserted that some of the officers “were harassing my employees.”

“They were intimidating and causing some of my black and brown employees to feel unsafe,” Moon Neitzel alleged.

The “gun-free zone” designation was part of a campaign initiated several years ago by Washington CeaseFire, a local gun prohibition organization. More than a hundred businesses designated themselves as “gun-free zones” in an effort to discourage armed citizens from entering their premises. The campaign hasn’t stopped gun-related homicides in the city, which have gone up, rather than down in recent years.

Mike Solan, president of the Seattle Police Officers Guild, told KCPQ the sign is “political pandering” and it could backfire.

A check on Molly Moon’s website where she shares a company newsletter brought two reactions, both critical of the restriction imposed on police officers. Likewise, at the Law Officer website, reaction from people ranged from disappointment to bristling disdain.

Private businesses can impose whatever rules they want on their premises, but at the same time potential customers can spend their money somewhere else. Moon Neitzel told KCPQ her business is down more than 50 percent from the same period last year, blaming the COVID-19 pandemic, but she also acknowledged the sign may alienate some potential customers.

Dave Workman is a senior editor at TheGunMag.com and Liberty Park Press, author of multiple books on the Right to Keep & Bear Arms and formerly an NRA-certified firearms instructor.

The post Seattle Ice Cream Shop Flap: Is It a ‘Cop Thing’ or a ‘Gun Thing?’ appeared first on AmmoLand.com.


Source: https://www.ammoland.com/2020/07/seattle-ice-cream-shop-flap-is-it-a-cop-thing-or-a-gun-thing/
Before It’s News® is a community of individuals who report on what’s going on around them, from all around the world.