Earlier today, we reported that sentiment in the latest Bank of America Fund Manager survey was so bullish, even survey organizer, BofA Chief Investment Officer Michael Hartnett, said it’s time to turn bearish for the near-term and “sell the vaccine” because Wall Street has gone “full bull”:

The most bullish Fund Manager Survey (FMS) of 2020 on the back of vaccine, election, macro; Nov FMS shows a big drop in cash, 20-year high in GDP expectations, big jump in equity, small cap & EM exposure; reopening rotation can continue in Q4 but we say “sell the vaccine” in coming weeks/months as we think we’re close to “full bull”.

Yet while there were several other observations in the survey (the full report can be found here), all of which confirmed what we had previously seen in the latest AAII survey, namely that virtually every trader is now super bullish… 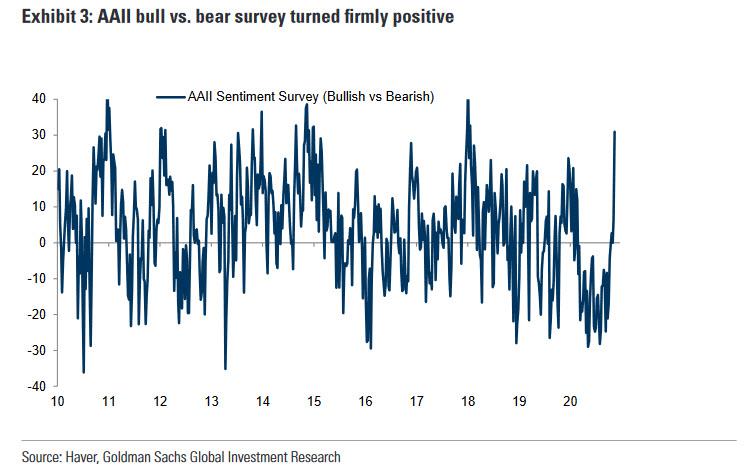 … what caught our attention was not among the list of euphoric superlatives, but was hidden deep inside the risk factors.

We are referring to what the survey respondents defined as the biggest threat: while at the top, for the 8th consecutive month, covid was seen as the biggest “tail risk”…

… what we found remarkable is that after “tech bubble” in 2nd place in the list of biggest tail risks, “Civil Unrest” suddenly popped into 3rd place, after not being cited as a notable risk in any of the previous BofA surveys.

So what’s going on here, is Wall Street really starting to worry about what we first said back in 2010 – much to Time Magazine’s mockery – that the Fed’s disastrous policies would eventually push US society to armed conflict and/or to civil war. While it may be easy to dismiss such fears as hyperbolic, consider what otherwise level-headed Bloomberg macro commentator (and former Lehman trader) Mark Cudmore wrote overnight in his latest lament that markets are so broken, that in the end, it will all “end in tears”, either in the form of collapse of fiat currency or through “political revolution”, read armed conflict.

Which brings us back to square one. Because in a world where a handful of traders are the most bullish they have been in 20 years while the living standards of tens of millions of Americans are absolutely dismal with the economy on the verge of yet another depression-causing shutdown, the flashbacks to the days just before the French Revolution are all too real.

We leave you with Cudmore’s full dystopian comment on what comes next:

It has paid off this year to just enjoy the forest rather than study the trees. More than ever before, markets are rewarding investors who have the ability to embrace a strong narrative over those who focus on analysis and details.

I have rarely experienced such a large gap between my confidence in the future of the largest market drivers and my lack of conviction in where the risk-reward trades lie. There’s a large cohort of the market suffering from the same dilemma but many others are thriving.

The winners are the people smart enough to recognize the reinvigorated power of an old market adage: “Don’t fight the Fed.” The influence of central banks is now pervasive in all markets — not just bonds, credit and stocks, but also cryptocurrencies and art.

Ironically, the incredible impact of central bank policies stems from their powerlessness to achieve a narrow mandate. With limited success in boosting inflation in the face of a global pandemic, they have resorted to fueling the only price gains they can guarantee: financial assets and investments.

Since March, Bloomberg’s Markets Live team has joked internally that the answer to any question is “Buy stonks!” (the typo an intentional reference to the “hodl” meme that successfully encapsulated a similarly unsophisticated winning strategy in crypto) and that any negative news is just a “dip-buying opportunity” in this post-truth world.

These comments were most often thrown out by the cynics on the team, but it’s the wise minority who realized their power. A month ago I highlighted that risk-reward analysis has become reward-analysis and yet I’ve struggled to embrace this new era myself.

I too often delve into whether a narrative has become over-priced in an asset class, when such an approach should now only be applied to a small subset of negative stories. For positive ones, there’s no such reason to question their longevity, as they will naturally morph into a fresh bullish narrative — one with different protagonists but a similar outcome, just like in The Neverending Story.

So where do we stand? Interest rates will stay low for a long time to come; any violent market selloff will be dealt with by extraordinary policy steps; the virus will ultimately be contained but not until after many more fatalities, lost livelihoods and corporate bankruptcies; e-commerce, telecommuting and cashless transactions have seen a permanent boost; the inequality gap grows ever larger and the political frustrations ever deeper.

What does that mean for investors? No idea! Well, that’s not true. Deep down I think we all know what this means but some are better at embracing this paradigm wholeheartedly.

The path will be volatile but selloffs are indeed dip-buying opportunities. It will end in tears at some point, maybe through political revolution or perhaps the collapse of fiat currency, but that time could be many years away and shouldn’t influence how you operate today.

To quote Charles Prince, the CEO of Citigroup until the eve of the financial crisis: “When the music stops, in terms of liquidity, things will be complicated. But as long as the music is playing, you’ve got to get up and dance.”

Sure, he soon resigned and was asked to testify before Congress about the millions of dollars in exit pay he received after the bank lost billions on subprime mortgages. But his words bring to mind this year’s winners who can dance in the forest without noticing the trees.

The post For The First Time, Wall Street Admits That “Civil Unrest” Could Crash Markets first appeared on SHTF Plan – When It Hits The Fan, Don’t Say We Didn’t Warn You.