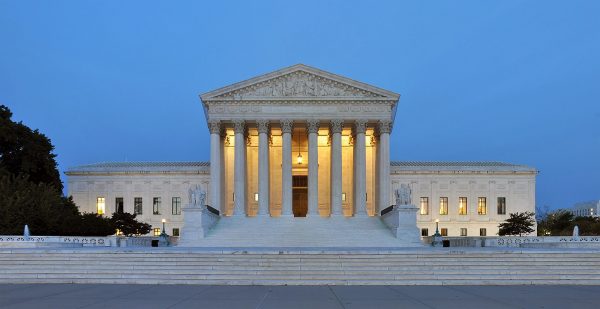 Very few of the lawsuits that Trump’s legal team has filed since Election Day have really worried the left, but when Texas Attorney General Ken Paxton filed a lawsuit directly with the Supreme Court on Monday night they immediately began freaking out.  The reason why they are so alarmed is because they understand that this suit has the potential to flip the election.  The suit alleges that the states of Georgia, Michigan, Pennsylvania, and Wisconsin conducted their elections in ways that violated the U.S. Constitution, and if the Supreme Court agrees that would almost certainly mean that the Supreme Court would force the state legislatures of those states “to appoint a new set of presidential electors in a manner that does not violate the Electors Clause and the Fourteenth Amendment”.

At this hour, we are being told that Louisiana, Arkansas, Alabama, Florida, Kentucky, Mississippi, South Carolina and South Dakota have all joined the suit that Paxton has filed.  The U.S. Constitution gives the Supreme Court original jurisdiction over controversies between states, and so this is why this case did not need to be filed in a lower court first.  But the Supreme Court is not obligated to hear any particular case, and many on the left initially thought that the Court would never actually agree to hear it.

Well, it was put on the docket just 12 hours after it was filed, and so it will be heard.

And on Tuesday evening, the Supreme Court ordered the defending states to file their answers by Thursday at 3 PM eastern time.

So this is really happening.

The Supreme Court will determine the fate of the 2020 election after all.

In his complaint, Paxton argued that voters in his state were affected by the unconstitutional voting procedures in the other states because in “the shared enterprise of the entire nation electing the president and vice president, equal protection violations in one state can and do adversely affect and diminish the weight of votes cast in states that lawfully abide by the election structure set forth in the Constitution.”

And he is absolutely correct.  When one or more states violates the U.S. Constitution during a presidential election, that harms everyone that voted, because voters in every state are involved in electing the president.

According to the Electors Clause, state legislatures have the authority to establish how presidential electors will be chosen in their particular states, but Paxton alleges that government officials in Georgia, Michigan, Pennsylvania, and Wisconsin made up their own rules and did not follow the election laws that had been passed by their own state legislatures…

“Using the COVID-19 pandemic as a justification, government officials in the defendant states of Georgia, Michigan, and Wisconsin, and the Commonwealth of Pennsylvania, usurped their legislatures’ authority and unconstitutionally revised their state’s election statutes,” Paxton wrote in his filing.

“To safeguard public legitimacy at this unprecedented moment and restore public trust in the presidential election, this Court should extend the December 14, 2020 deadline for Defendant States’ certification of presidential electors to allow these investigations to be completed,” he wrote. “Should one of the two leading candidates receive an absolute majority of the presidential electors’ votes to be cast on December 14, this would finalize the selection of our President. The only date that is mandated under the Constitution, however, is January 20, 2021.”

Unlike the allegations of election fraud that are floating around out there, these allegations are very easy to prove.

For these constitutional violations alone, the election results in all four states should be thrown out.

In addition, in his complaint Paxton alleges that voters in various parts of these states were treated very differently…

Second, the complaint describes how voters in different parts of these states were treated differently. For example, election officials in Philadelphia and Allegheny Counties in Pennsylvania set up a “cure process” for voters in those jurisdictions whose absentee ballots did not comply with state legal requirements. Those noncompliant ballots should have been rejected because state law does not allow such a procedure.

As a result of this behavior and similar behavior in other states, there was “more favorable treatment allotted to votes” in areas “administered by local government under Democrat control.”

Once again, this should be a slam dunk to prove based on the evidence that has already been publicly presented.

And without a doubt, differential treatment violates the Equal Protection Clause of the Fourteenth Amendment.

On top of that, in Bush v. Gore the Supreme Court clearly prohibited “the use of differential standards in the treatment and tabulation of ballots within a state.”.

Lastly, Paxton alleges that there were “voting irregularities” in each of the four states, and those allegations are going to be more difficult to prove.

Assuming that is the case, what is the appropriate remedy?

In each of those states, those legislatures could opt to hold new elections or alternatively they could decide to choose new slates of electors themselves.

And since all four of those state legislatures are controlled by Republicans, that would seem to favor President Trump.

Needless to say, if the current election results in Georgia, Michigan, Pennsylvania, and Wisconsin are overturned, the left will have a massive temper tantrum.  Cities all over the nation would burn and we would see endless civil unrest for the foreseeable future.

So that may make some members of the Court hesitant to overturn the current election results no matter what the Constitution actually says.

But if there are at least five justices that are willing to follow the Constitution no matter what the consequences are, we may soon see the most shocking decision in the entire history of the U.S. Supreme Court.