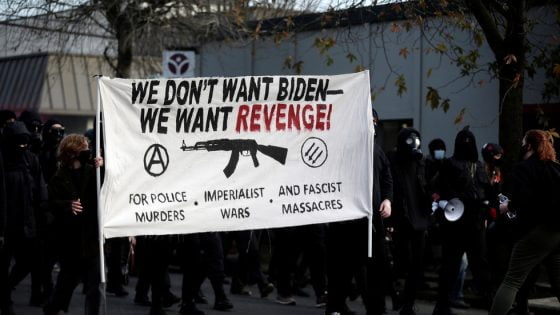 Mere hours after democrat Joe Biden was inaugurated in the pomp and circumstance dog and pony show as the 46th president of the United States, Antifa took to the streets of Portland and Seattle to wreak havoc.  The groups burned flags, looted, and rioted while leaving destruction behind them.

People are upset on all sides right now.  In Seattle, flags were burned in the middle of the street.

At least two of the rioters were arrested for property damage and assault.

The group rioting in Portland also targeted the Democratic Party of Oregon building for special destruction, breaking windows, spray painting graffiti (including “anarchy” symbols and a “F**k Biden”), and overturning dumpsters. Some held signs with slogans including “We are ungovernable,” “A new world from the ashes,” and “We don’t want Biden – we want revenge.”

Significant damage at the Democratic Party of Oregon bldg at 9th & Everett pic.twitter.com/uZGBvhkJcc

The MAGApocalypse predicted by the mainstream media’s talking heads never materialized, however. Portland police told local media they arrested eight people on charges including rioting, reckless burning, possession of a destructive device, and criminal mischief. There were at least two other post-inauguration protests scheduled for Wednesday, according to RT.

Please remain prepared and peaceful. This may be just the beginning. Violence will only expand the government’s power and give the ruling class an excuse to clamp down hard on the slaves. Protest by leaving their system and not participating. Don’t play into their hand by committing violence and destroying private property.

The post Antifa Wreak Havoc On Seattle & Portland After Biden’s Inaguration first appeared on SHTF Plan – When It Hits The Fan, Don’t Say We Didn’t Warn You.