Others think that Trump actually took Hawaii.   The signs and vehicle signs support that. 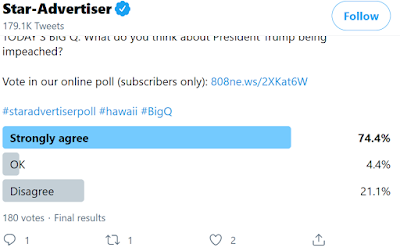 1 day ago
What is truly amazing is so many are ready to impeach from all venues with no evidence other than an opinion. Based on nothing more than hatred. History has had those sort of people destroy common sense and whole countries. Since there is no trial and no evidence other than Democrats are are fearful Trump will run in 24. Very sad state of mind you are all in. Time to get a life. Trump is strongest when he has weak minds against him. All successful people do. Ask Pelosi. DC fears them both.
1 day ago
He was indited with Impeachment, there has been no trial. To call this Impeached means nothing at this point. This is no different than a DA charging a crime and never taking it to court.
1 day ago
Democrats think their so cute in trying to take down the best President since President Reagan. Wait until Communism bites in the rear ðŸ˜³. When that happens, IT’S TO LATE. ðŸ‡ºðŸ‡²ðŸ˜ŽðŸ‡ºðŸ‡²
1 day ago
Best prez. since Nixon.
1 day ago

Worst president in the history of the US.Besides, chump is putin’s buddy. Communism comes from chump letting putin in.
1 day ago
Convict him!
1 day ago
Trump should also be tried for Treason!
2 days ago

Can the Senate Try a person that is no longer An Elected official. (do they have jurisdiction?) Lawyers are already discussing his fact. Interesting!
2 days ago
Too bad they won’t find 17 repub senators that have the fortitude to convict. But we can only hope but the other repubs are too afraid of chump.
2 days ago
tRump has made an moral and ethical mess of this country and his miss deeds should be assessed so that we can all learn from what went wrong and not go through this disgusting exercise again … any time soon.
2 days ago
Worst president EVER!
2 days ago
Obama too.
2 days ago
Impeachment was meant to be a mechanism to remove a sitting President. It was not meant to be used as a weapon to enforce a political vendetta against a President who is no longer in office.When the demwits in the Senate removed the 60 vote requirement to confirm a Supreme Court nominee, to just a majority, they were warned that one day they will regret it. Well, they sure regretted it when Trump’s nominees were approved by a simple majority. One day a democrat president will be impeached after he/she leaves office. The demwits will go berserk when that happens. They will have to be reminded again of what they did to Trump.
2 days ago
What a drama queenz.
2 days ago

The swamp is going to be drained very soon, martial law is coming ..
2 days ago
Yes, the democrats already have 20,000 heavily armed troops occupying all the buildings in Washington DC. At noon when Joe Biden is sworn in, VP Harris, I mean President Biden will declare Martial Law.
2 days ago
President Trump should wear the second impeachment as a badge of honor. He fought the swamp for over 4 years and won (and the swamp hates him for it). He accomplished more than any of the past 4 Presidents did combined. Well done President Trump. Well done. Most of us will miss you and look forward to your continued work to Make America Great Again.
2 days ago
Might as well wear it with pride. He has nothing else. Hopefully he will be on his way to jail. Lock him up!
2 days ago
He made the swamp wake up.
2 days ago
Only in your little world would being impeached twice be an honor.
2 days ago
Walking and running are good exercises for maintaining regular bowel movements. This is one theory on why there is a decreased incidence of colon cancer among those who walk and run
2 days ago
25,000+ lies from the liar in chief. Full warp speed ahead to remove the greatest DOTARD in history.
2 days ago
The best President ever supported by over 75 million Patriots. Corruption 2021 here we go.
2 days ago
There were a lot of presidents that were infinitely better. Let’s start with Washington, Lincoln, FDR, and Teddy Roosevelt.
1 day ago
So what sarge 222, the 81 million voters are NOT patriots? Gimme a break. You have been brain-washed, and I am sad for you.
2 days ago
Impeachment is the newest fad. It will be de rigueur in the future whenever the House and President are from different parties. The Republicans’ turn is coming soon.This was not the way it was supposed to be according to the Founders. The Founders were naive and forgot that “Power tends to corrupt, and absolute power corrupts absolutely. Great men are almost always bad men…”
2 days ago
May be true but why are republivans so bad. The Donald, GW Bush, Reagan, all floded the country with red ink.
2 days ago
More proof of corruption by the fake republicans. They love the fact that close to 400,000 Americans have died and our budget deficit is at 4 trillion, soon to be at 5 trillion. This is the best republicans can offer? Hate to see the worst.
2 days ago
What was that deficit from Boots? Covid, and the stimuli to keep the economy afloat. How hard is that to understand?