stock here — full credit to the real author, reproducing this here as many sites will be censored in the near future.

I think we should all resist referring to this as “the new normal.” It would be like coming home to find the smoke detector going off, the drapes on fire, the dog eating the couch, and your kids deciding that “pants are stupid,” and figuring, “oh well, I guess that’s just the new normal around here!”

There is nothing normal about this. 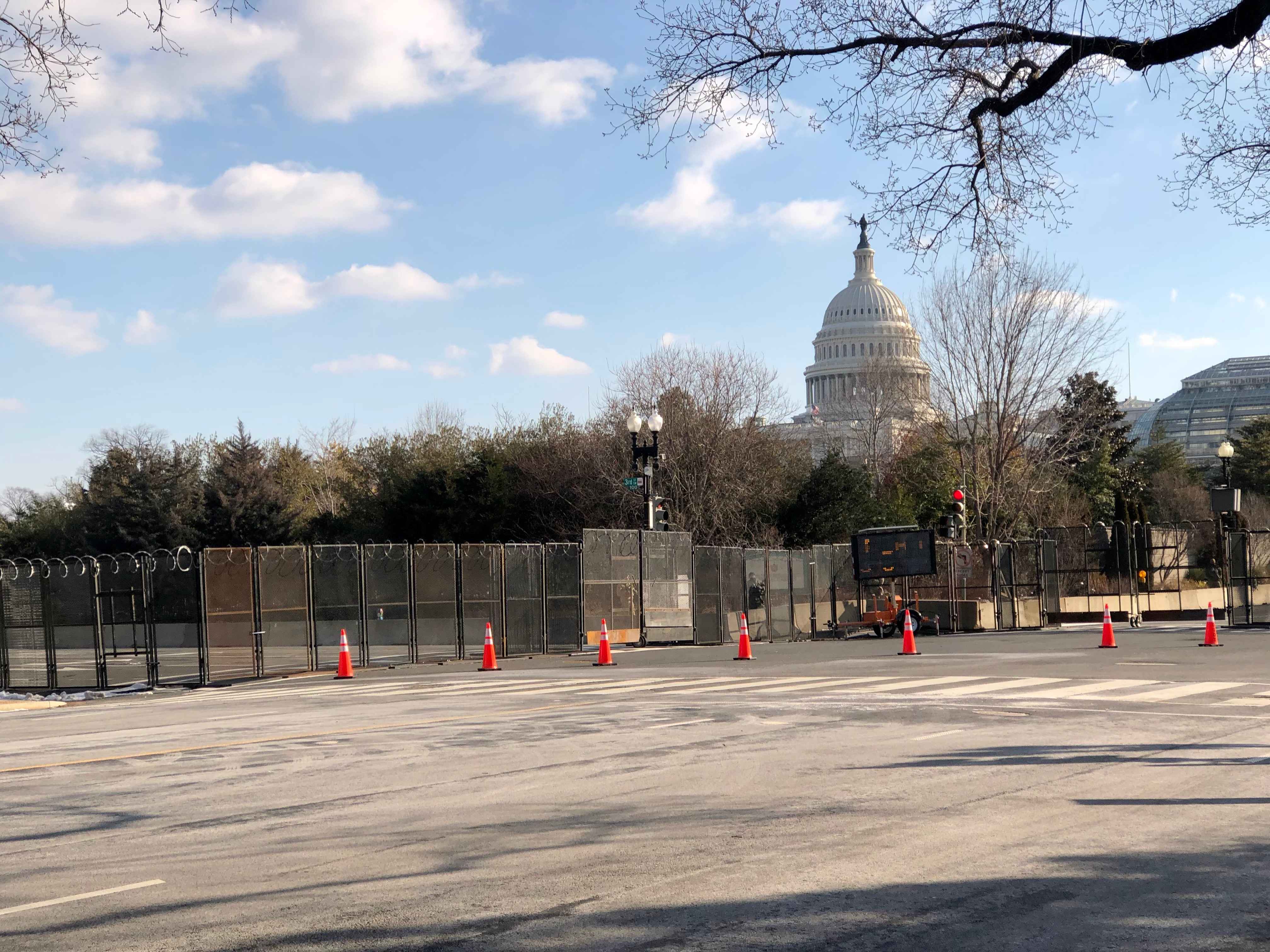 I had been meaning to get back into DC since I was last there shortly before the inauguration. I knew many of the National Guard troops were still here, and there was still fencing around the Capitol building, but I wanted to see it with my own eyes.

The good news is the “mall,” the open green space that runs from the Capital to the Lincoln Memorial with the Washington Monument in-between, was no longer locked behind literally miles of fences.

The bad news is, everything else that counts, still was.

This is standing on Independence Avenue at Third Street SW looking towards the Capitol building. (That’s the Botanic Garden to the right.) 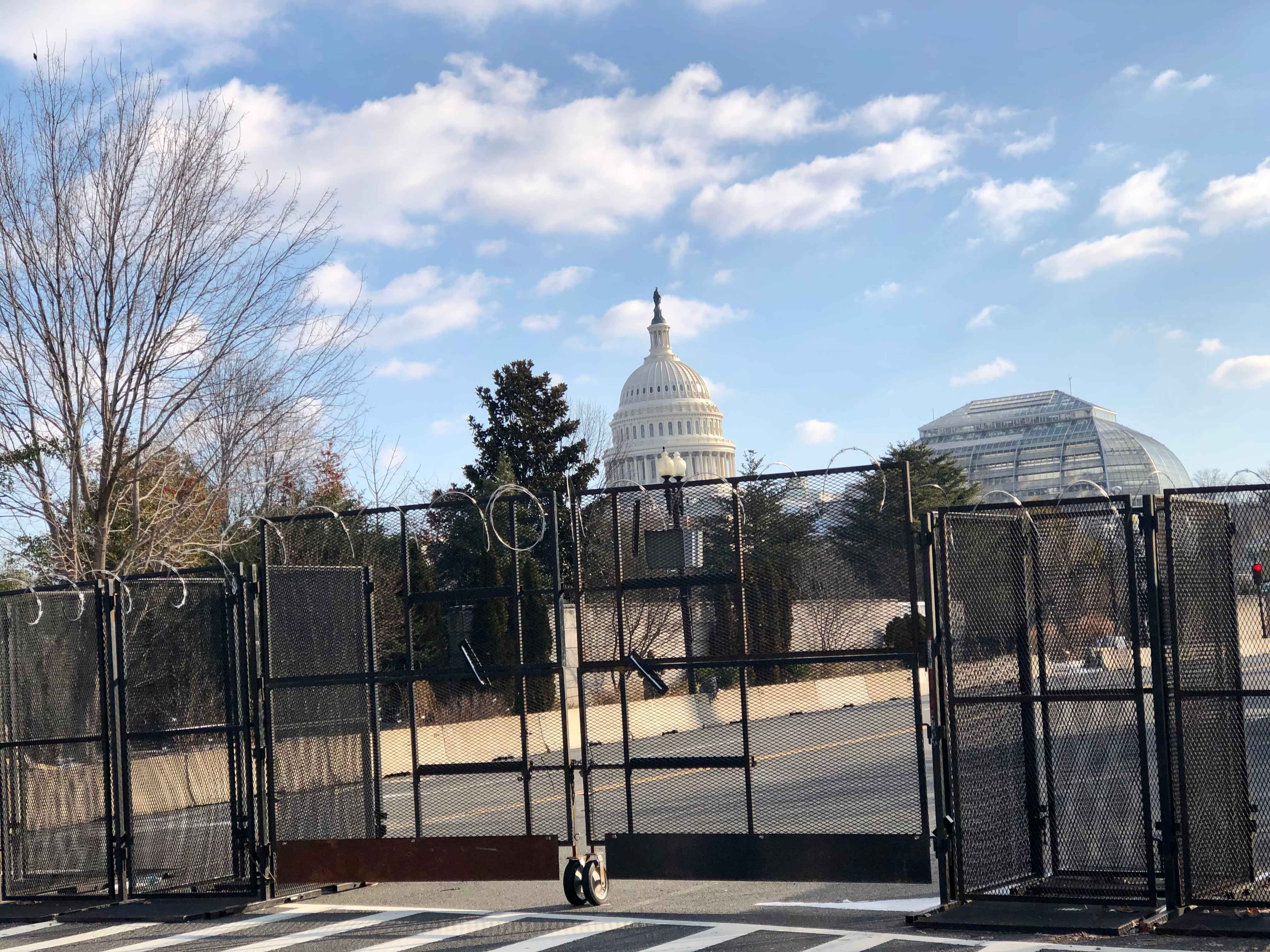 The map below should help orient you. The Capitol is to the right. 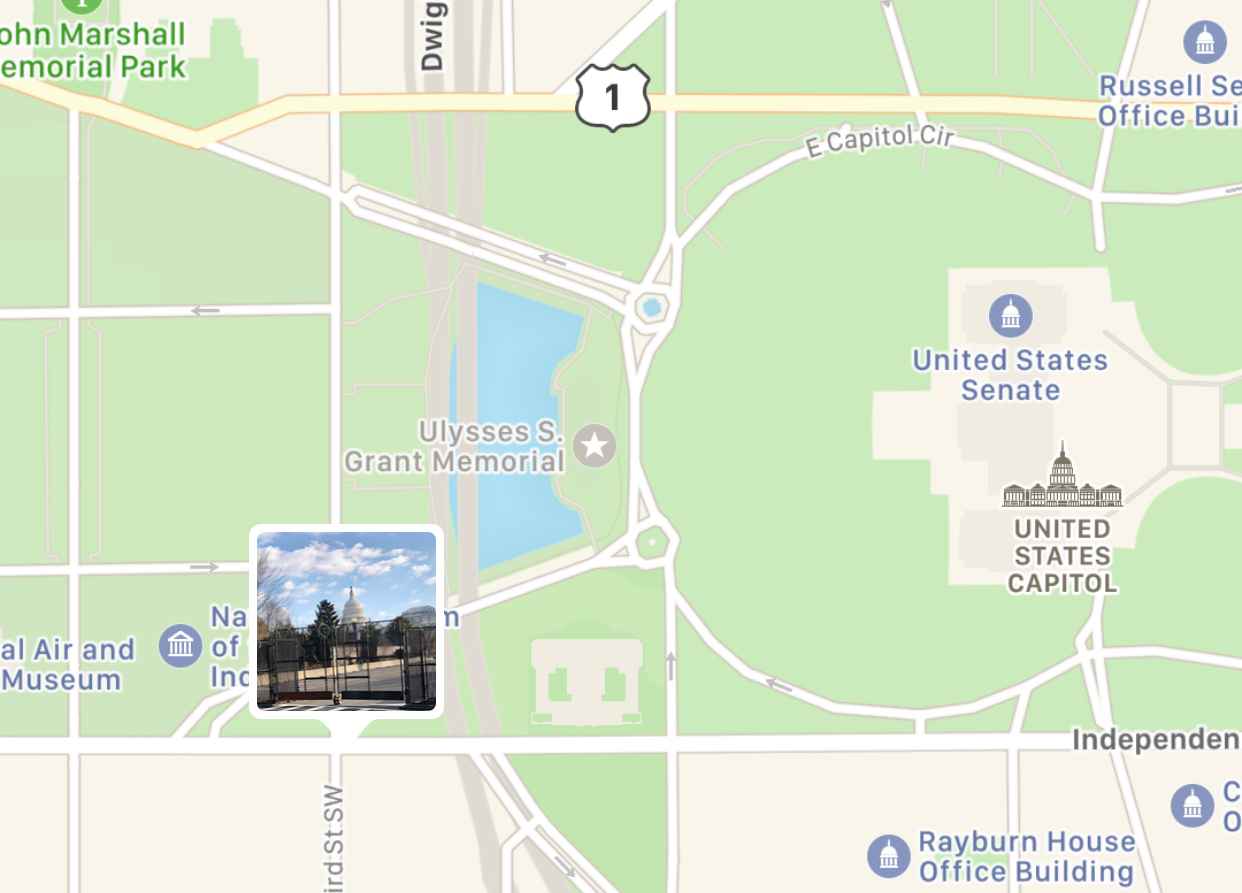 This fencing has been up since before the inauguration when I last visited. It’s the exact same fences even. The National Guard troops are less obvious because there are fewer of them, but they are there if you look closely (more on that later).

The other change is you can actually cross Independence Avenue, that is, the fencing on the south side of the street is gone, but the rest of the fencing is still there, with the same road closures protecting the various office buildings used by members of Congress.

Armed guardsmen to the right, looking down Independence. 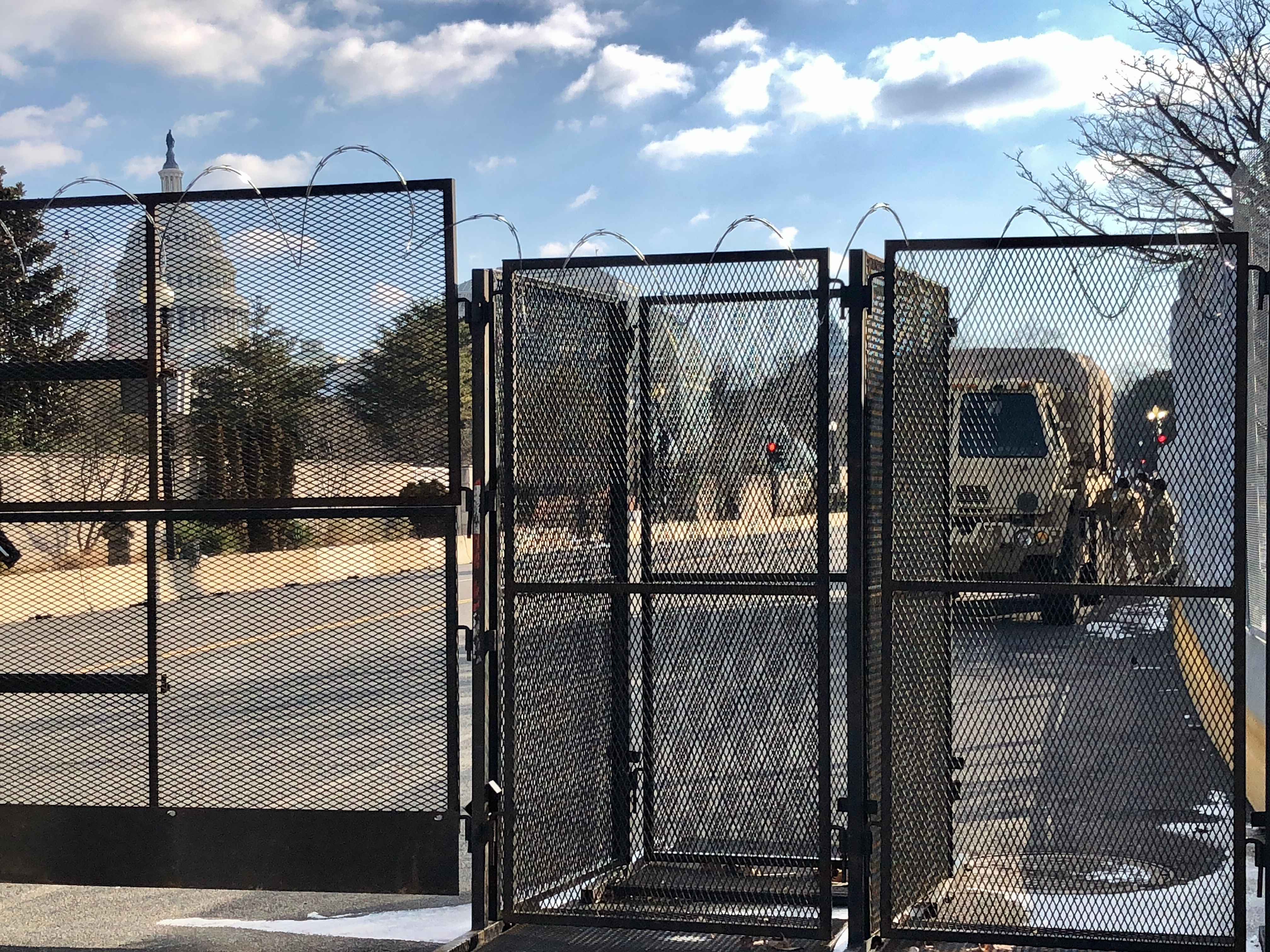 The shot below is looking north straight up Third Street, you can see the coloration on the bottom of the fences is the same as before. You can make out some guardsmen as well. 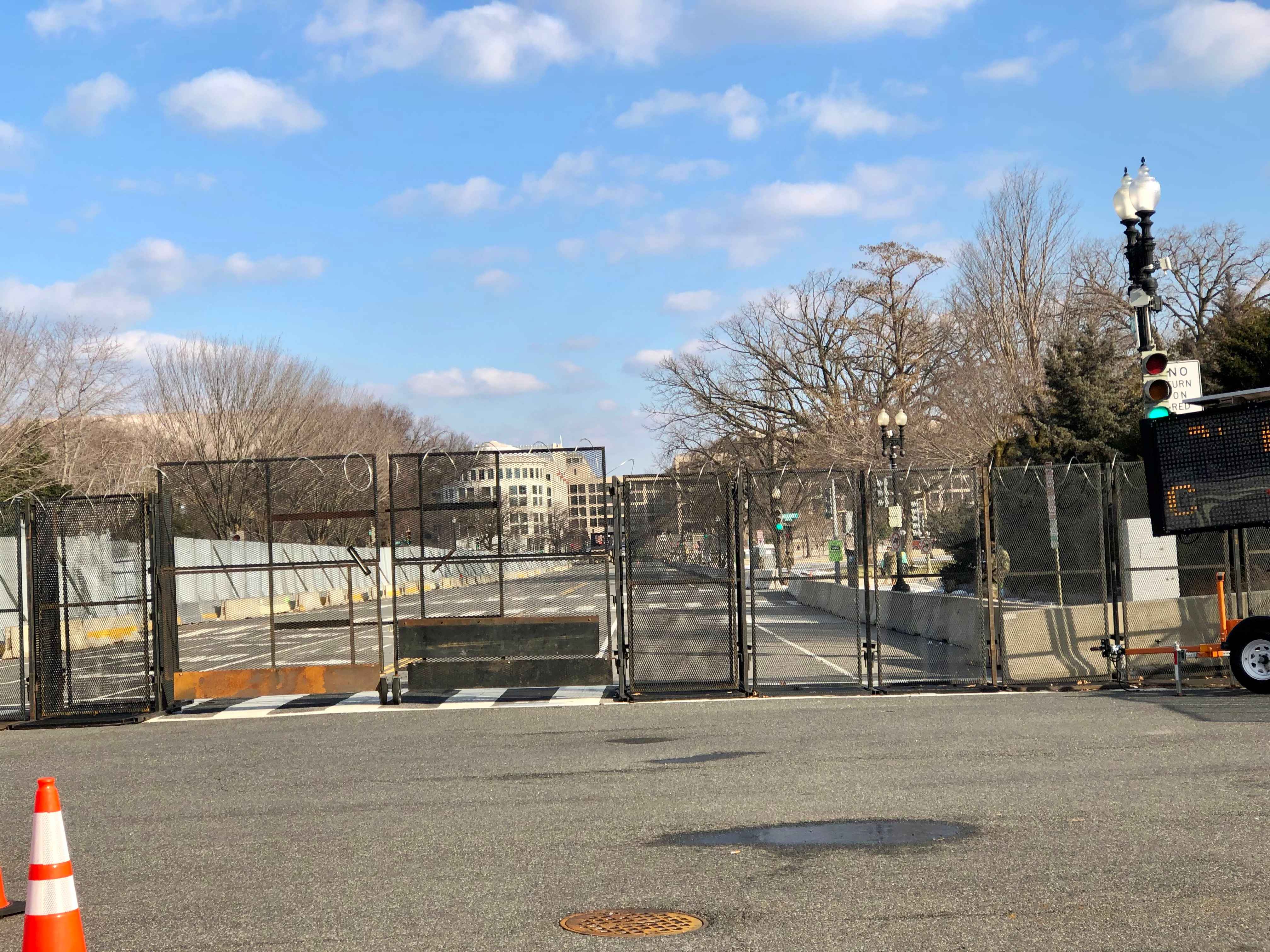 You’ve probably already noticed, in fact someone made a joke/not joke in the comments of my last piece about “when are they going to string razor wire,” and while there was razor wire up before, it seems more ubiquitous now (or maybe I’m just able to get closer to it with the outer fences down). 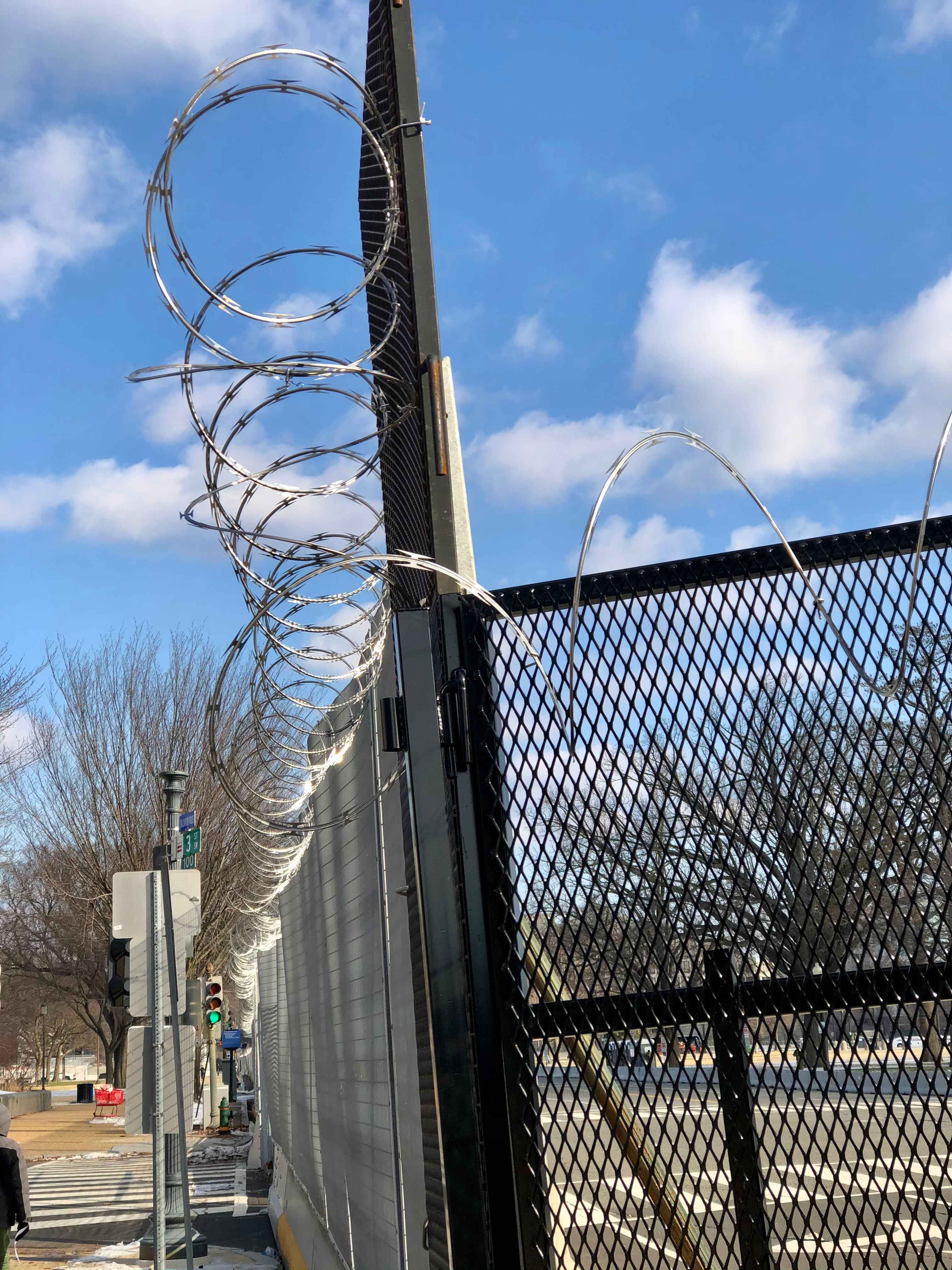 Let’s not normalize this, either. They’ve strung razor wire along the top of nine and ten-foot fences around the Capitol building in what is a constitutional republic in which the the leaders on the other side of that razor wire facing away from the muzzles of those M-4s govern only by the consent of the governed. 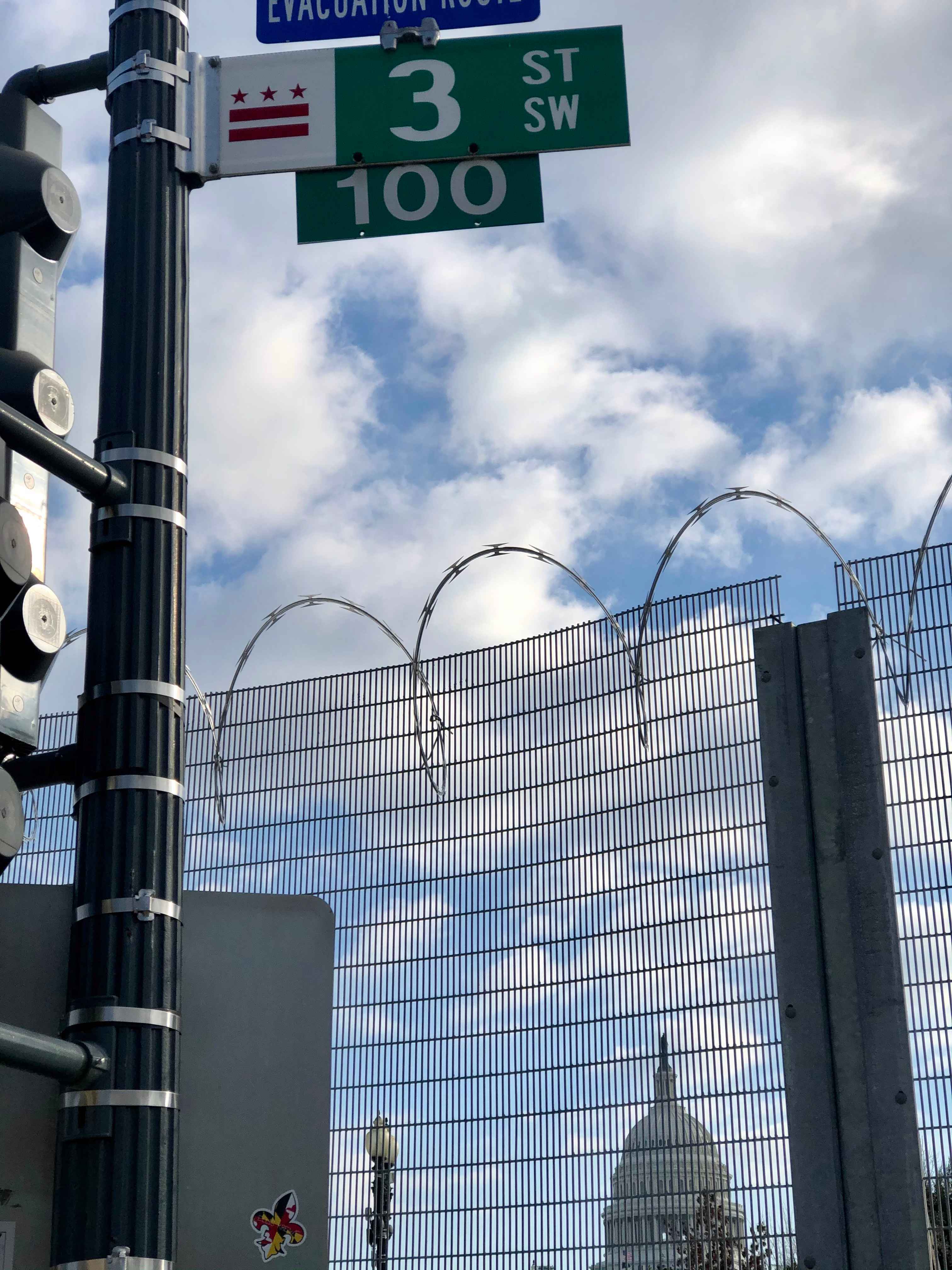 This is walking along Third Street. This is as close as you can get to your Capitol building. Note the troops. 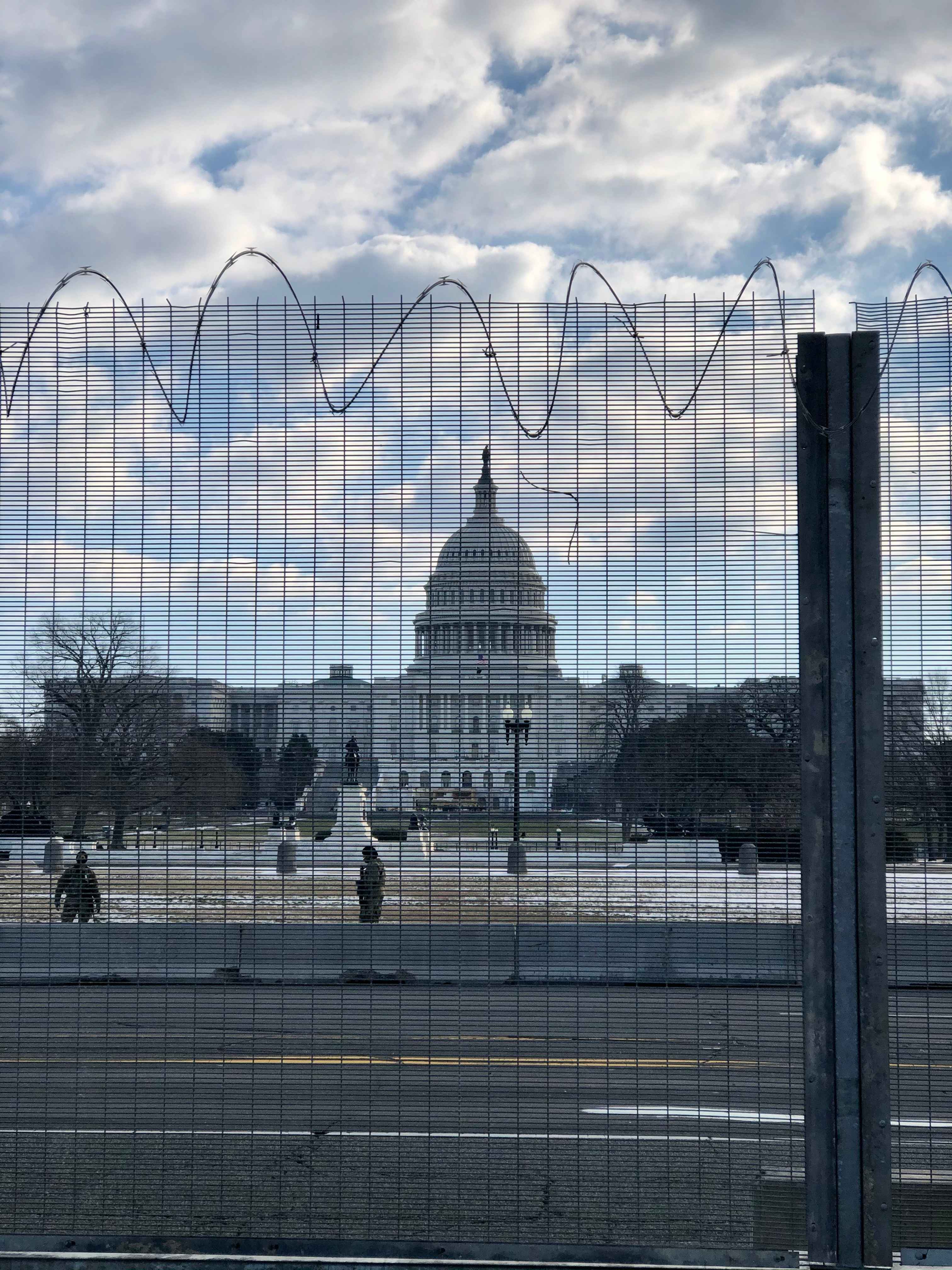 A little further down, I positioned my lens between the tightly woven fencing. There are definitely fewer troops, but they are standing guard all along the perimeter, and they are armed. 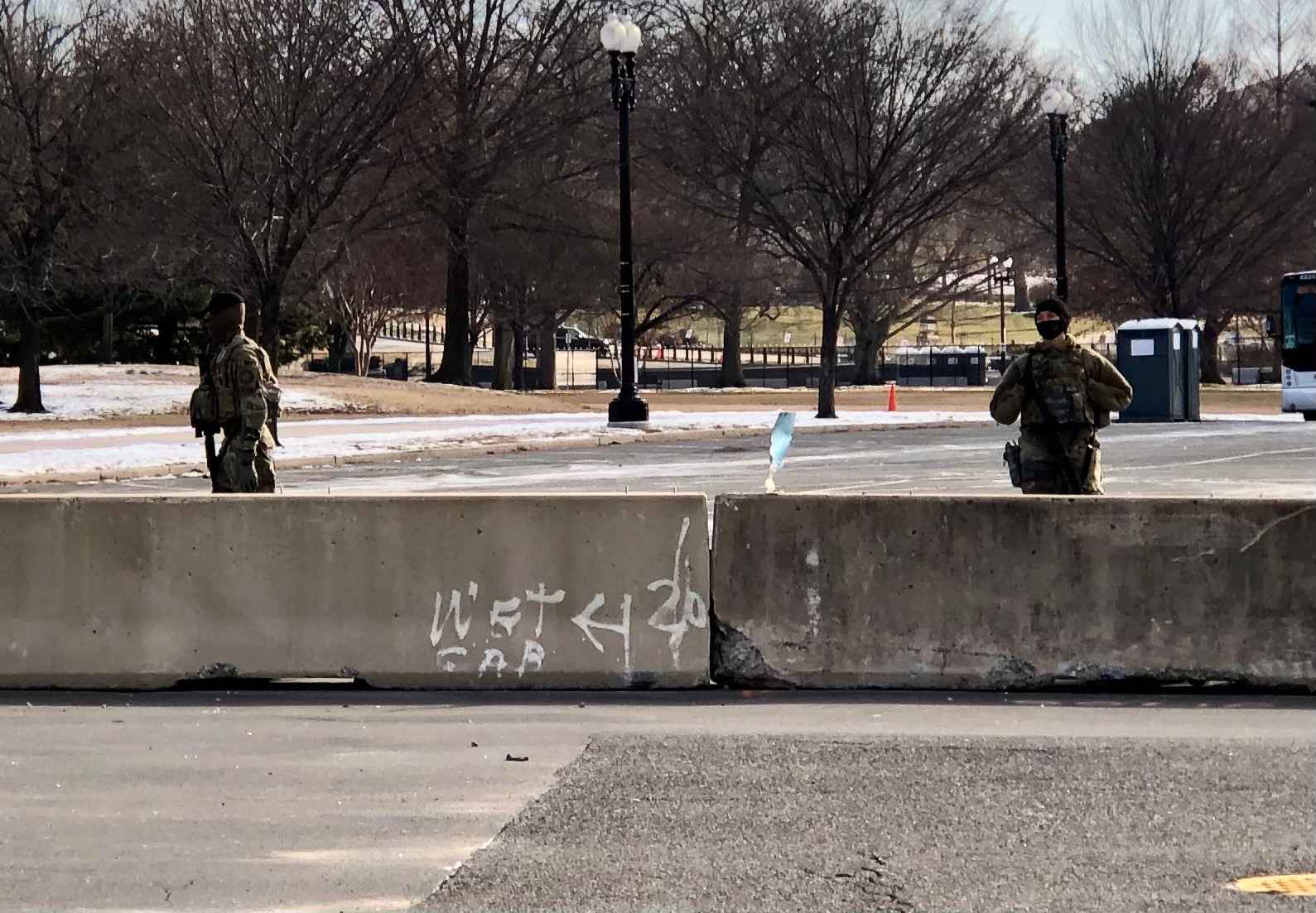 I then made my way towards the White House, and totally coincidentally passed this historic Washington landmark. 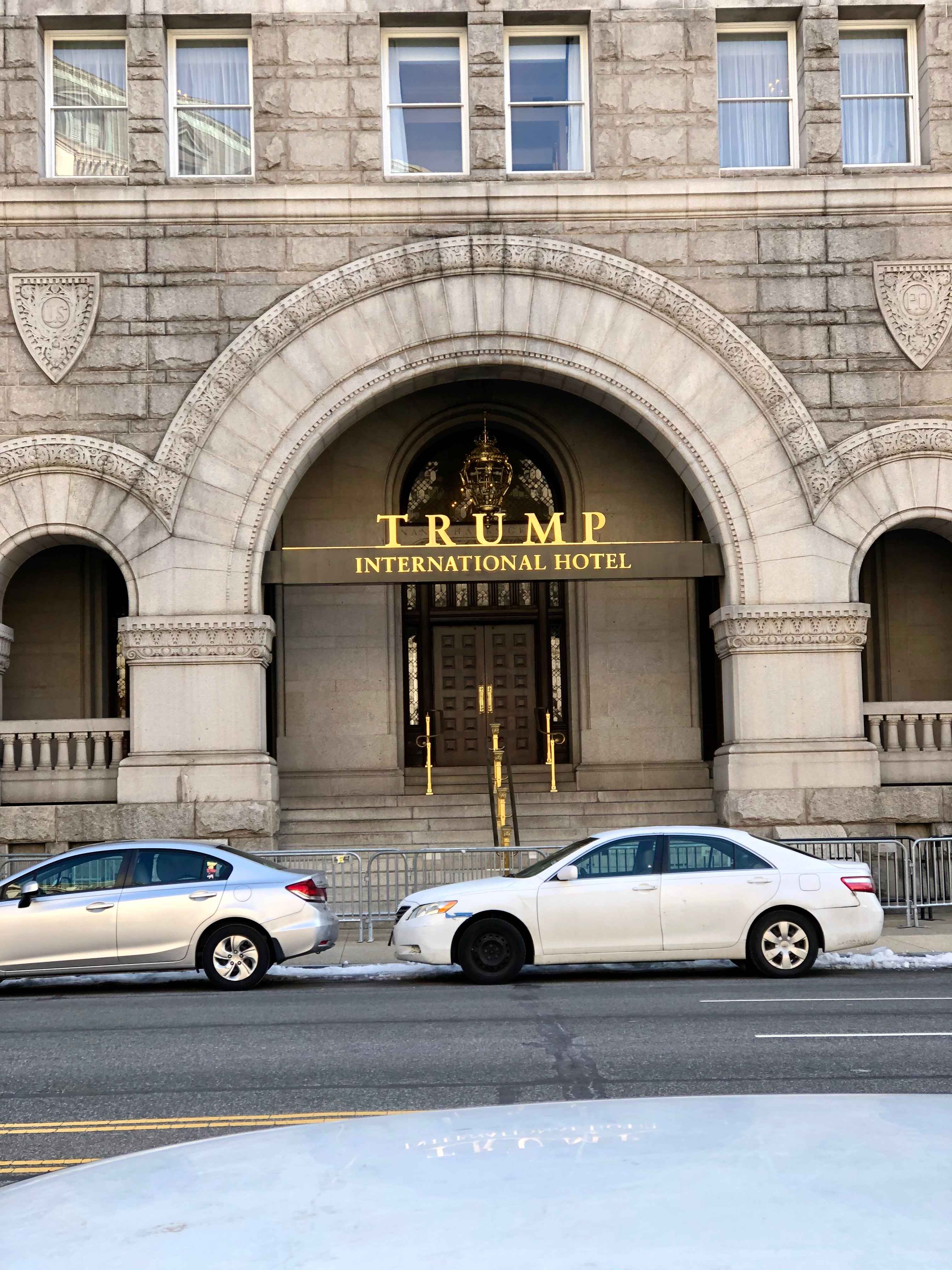 How were things going over at the Executive Branch?

I was walking along E Street and was greeted by this looking across 15th Street NW. 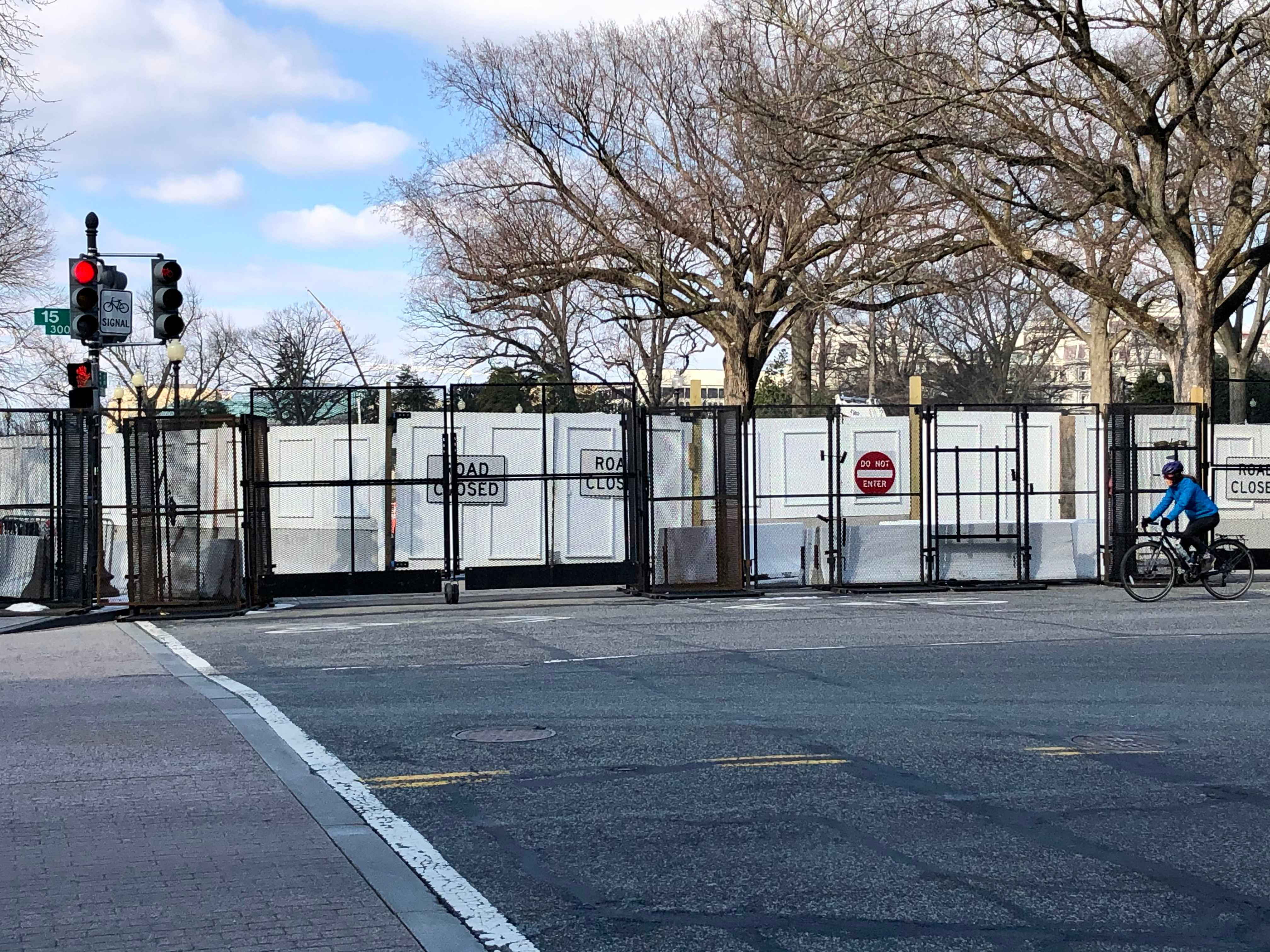 I crossed the street, walked down a few feet and took this shot looking north up 15th. That’s the Treasury Building you see in the background. 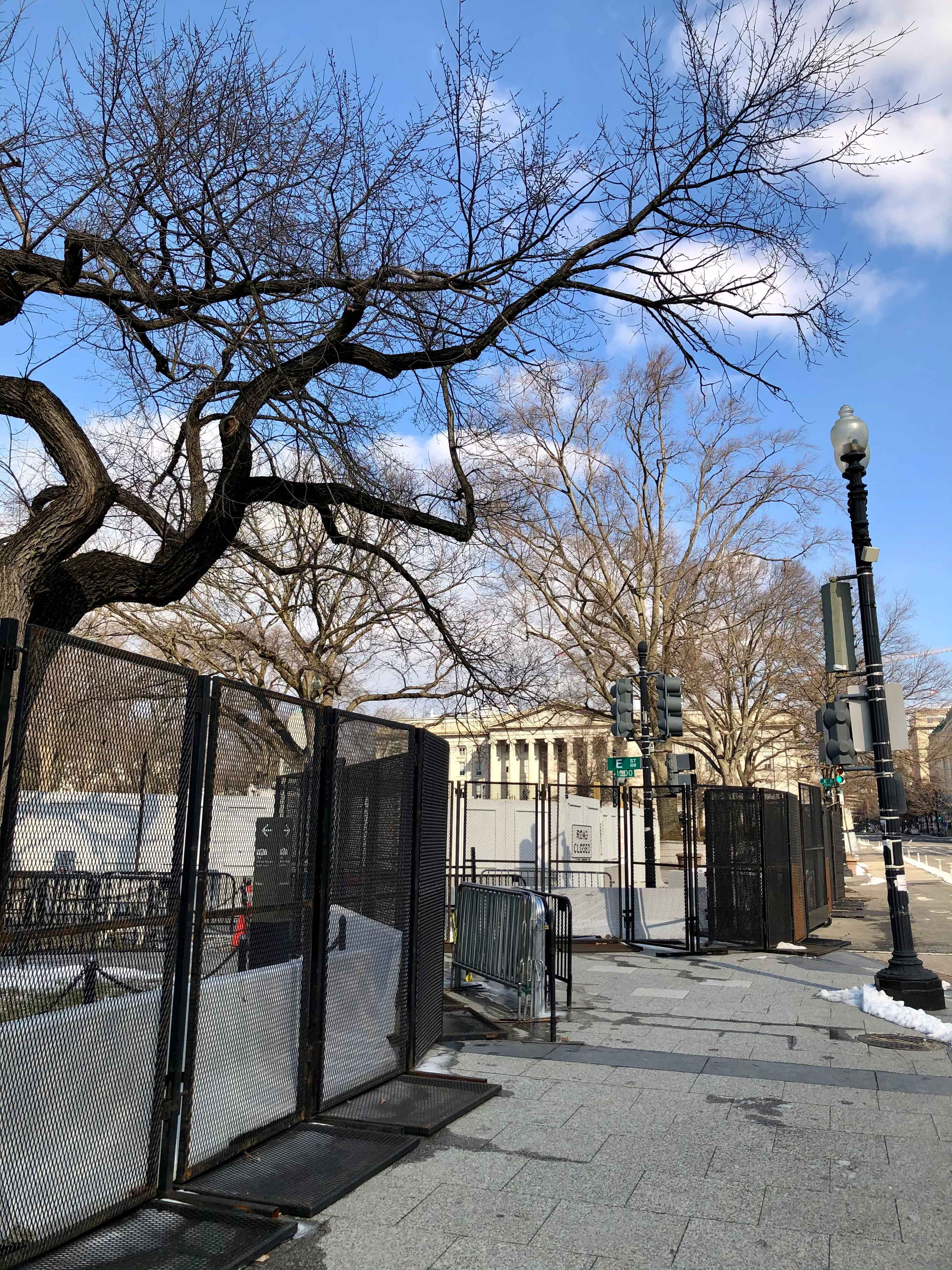 Here’s a map to give you a better sense of the fencing. I did not go all the way up north, but the fencing ran at least from beyond the Treasury Building in the upper right-hand corner, down 15th Street all the way to the bottom of the map to meet Constitution Avenue and went across from there. 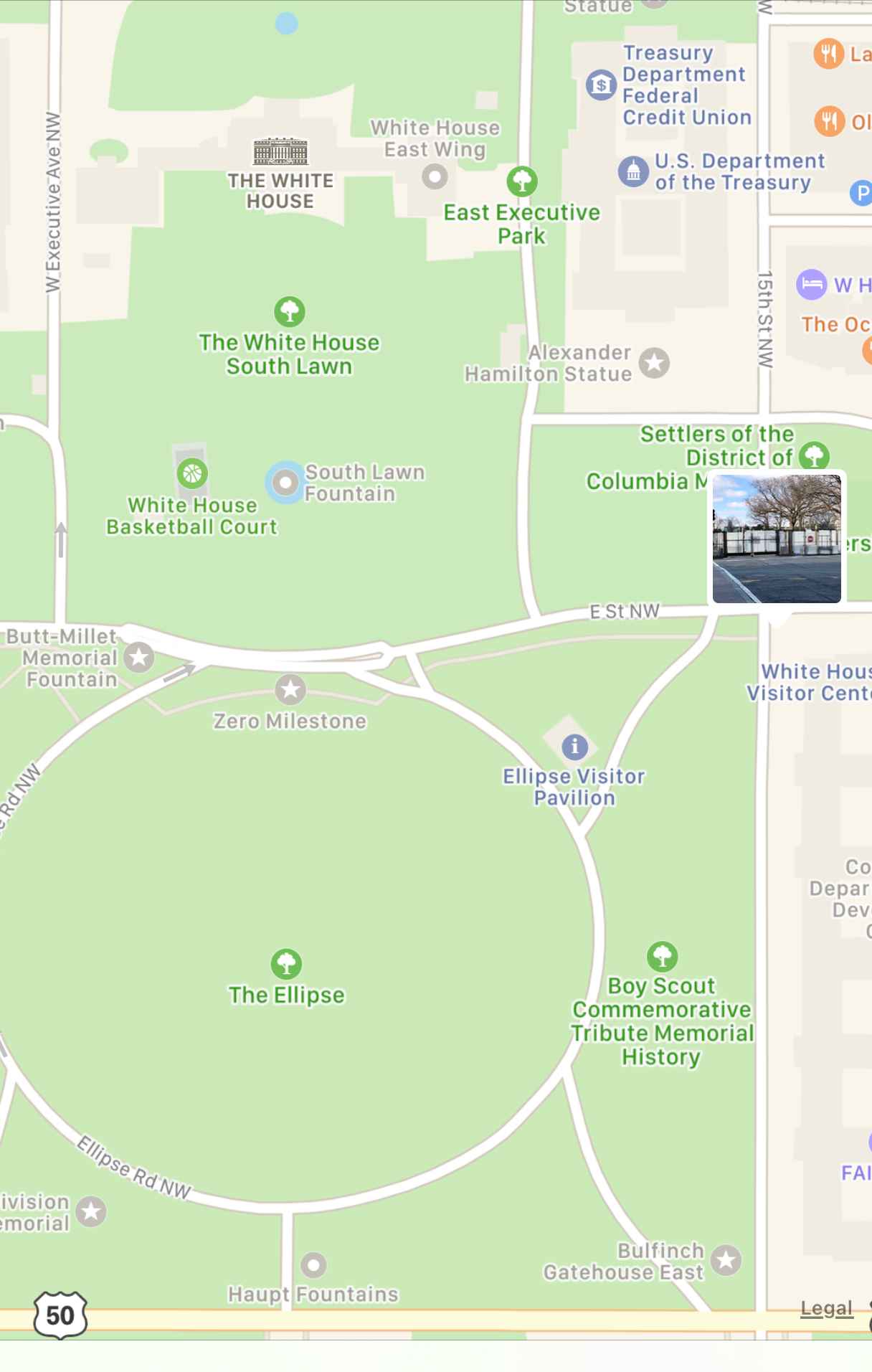 To give you a sense of this in human scale, this is looking up the fencing back towards the Treasury Building, about a half a block shy of Constitution. 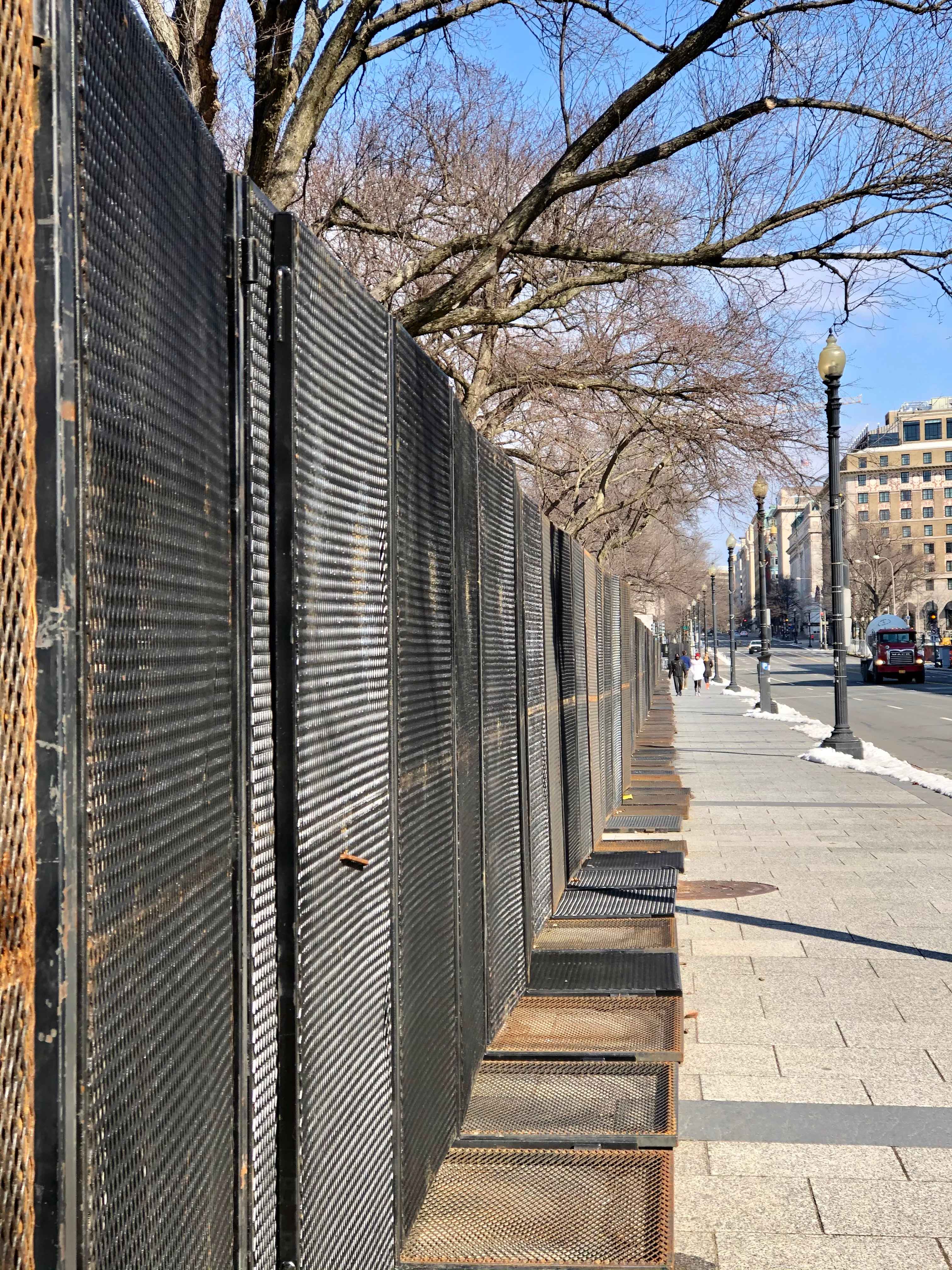 Here is the view from across Constitution Avenue directly in front of the White House. 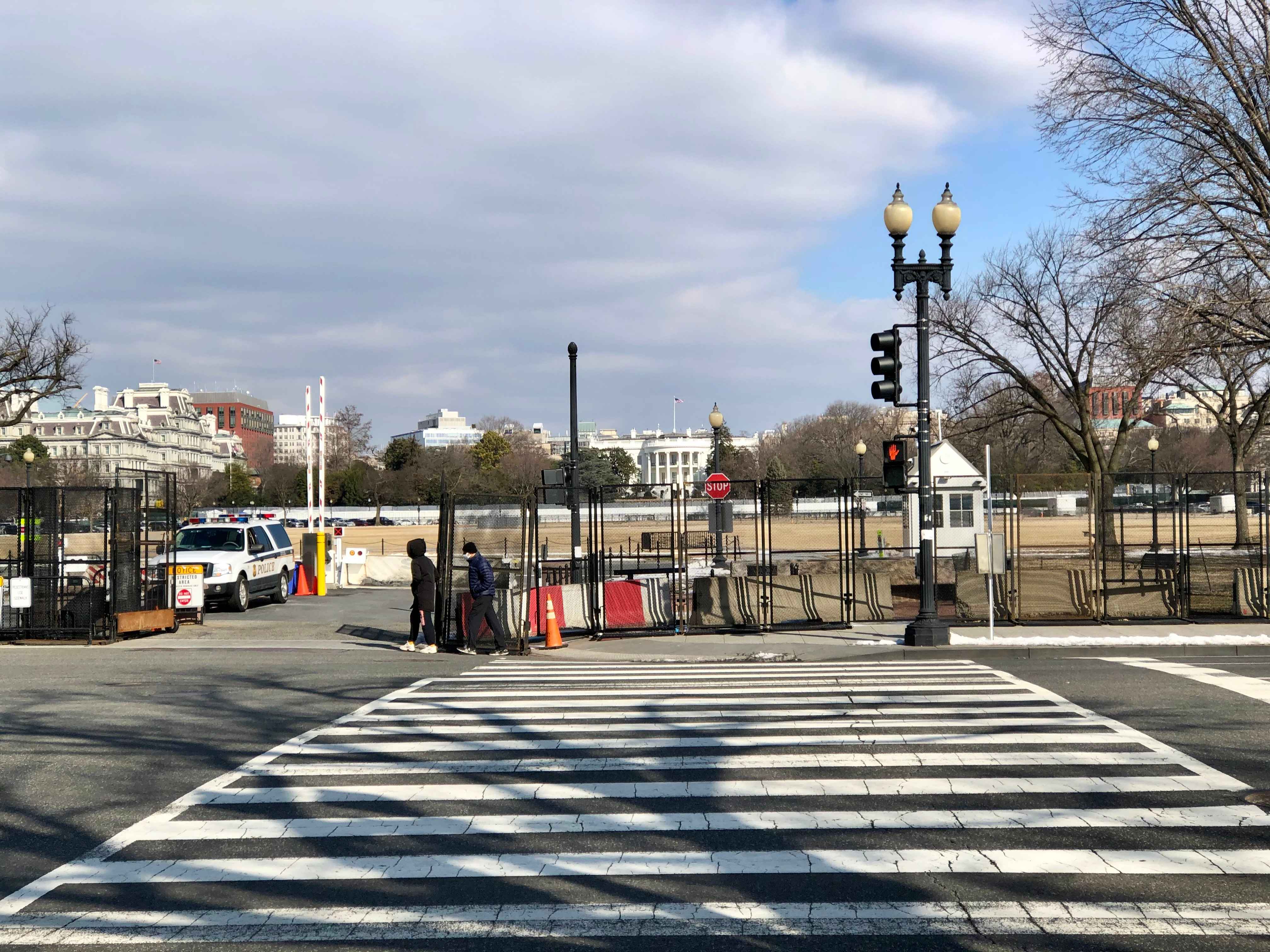 I swear that’s it, here’s a zoomed shot. 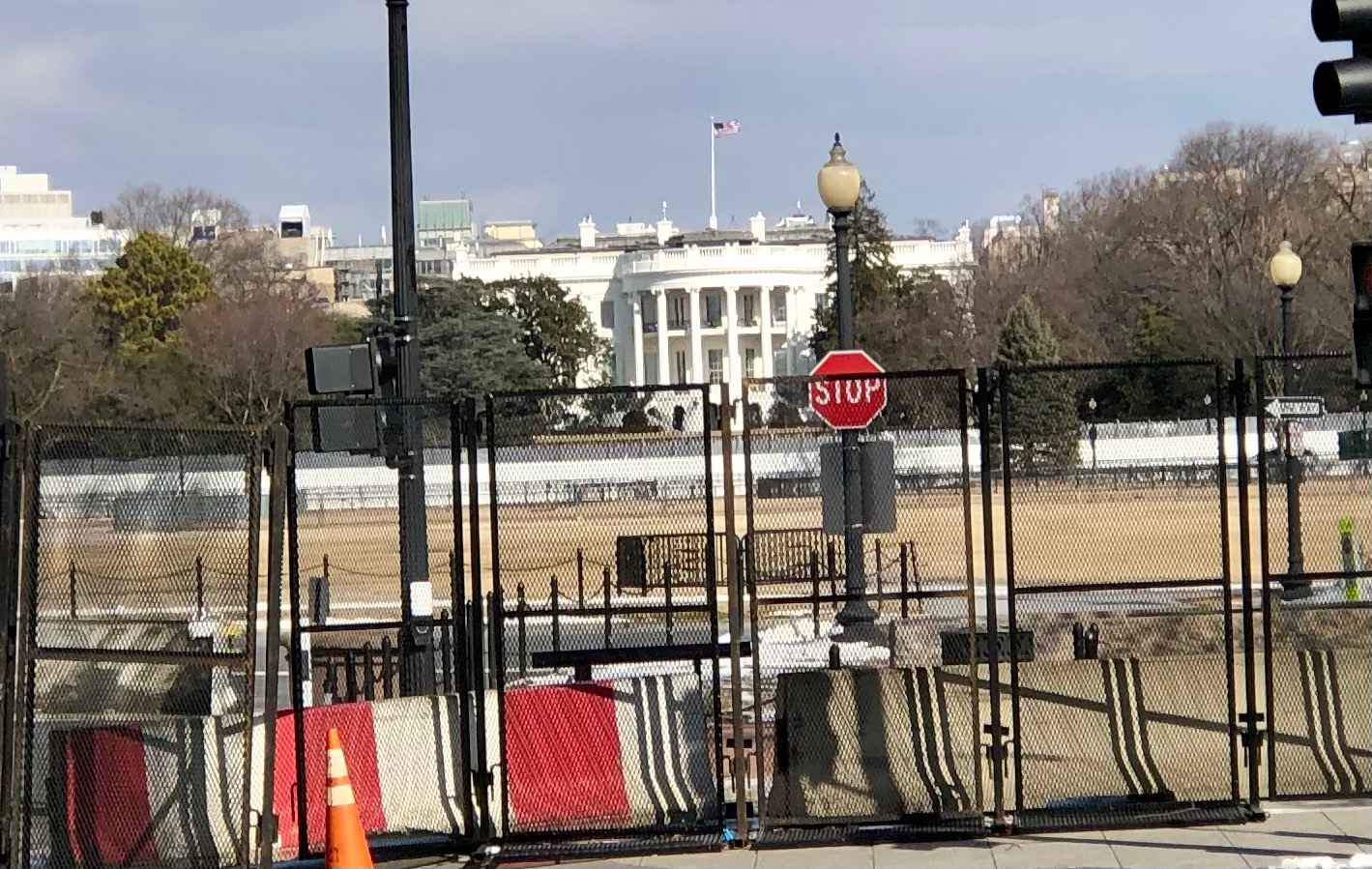 As you can tell by the earlier map, that massive area between the camera and the White House is called “The Elipse.” Here is the Wikipedia entry on it:

The Ellipse (sometimes referred to as President’s Park South) is a 52-acre (21 ha) park south of the White House fence and north of Constitution Avenue and the National Mall in Washington, D.C. The Ellipse is also the name of the five-furlong (1.0 km) circumference street within the park. The entire park, which features monuments, is open to the public and is part of President’s Park. The Ellipse is the location for many annual events.

They probably just haven’t gotten around to updating it yet.

Just to orient you again, the Washington Monument is directly opposite of the White House. 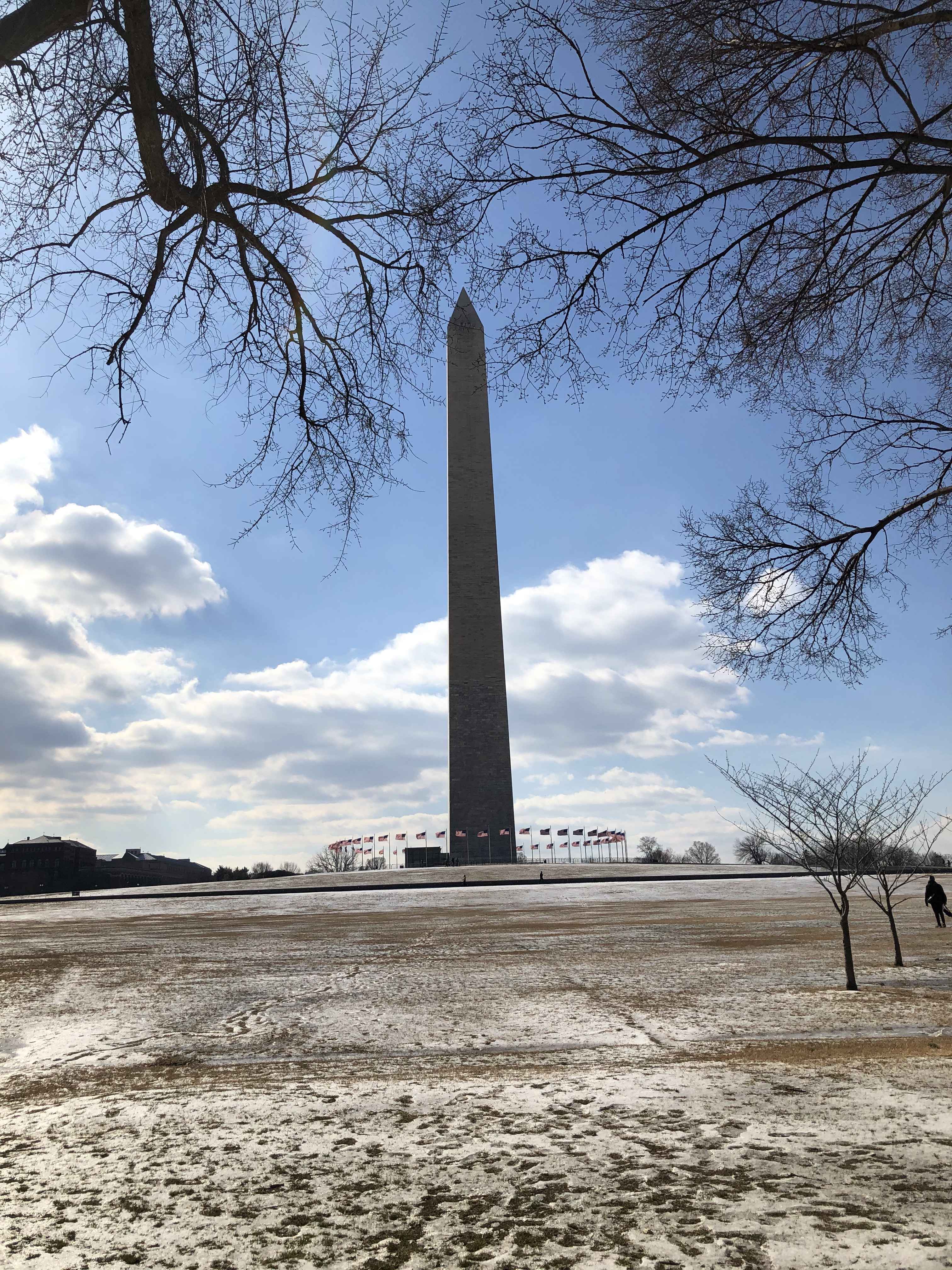 This is where the fencing terminates on Constitution. 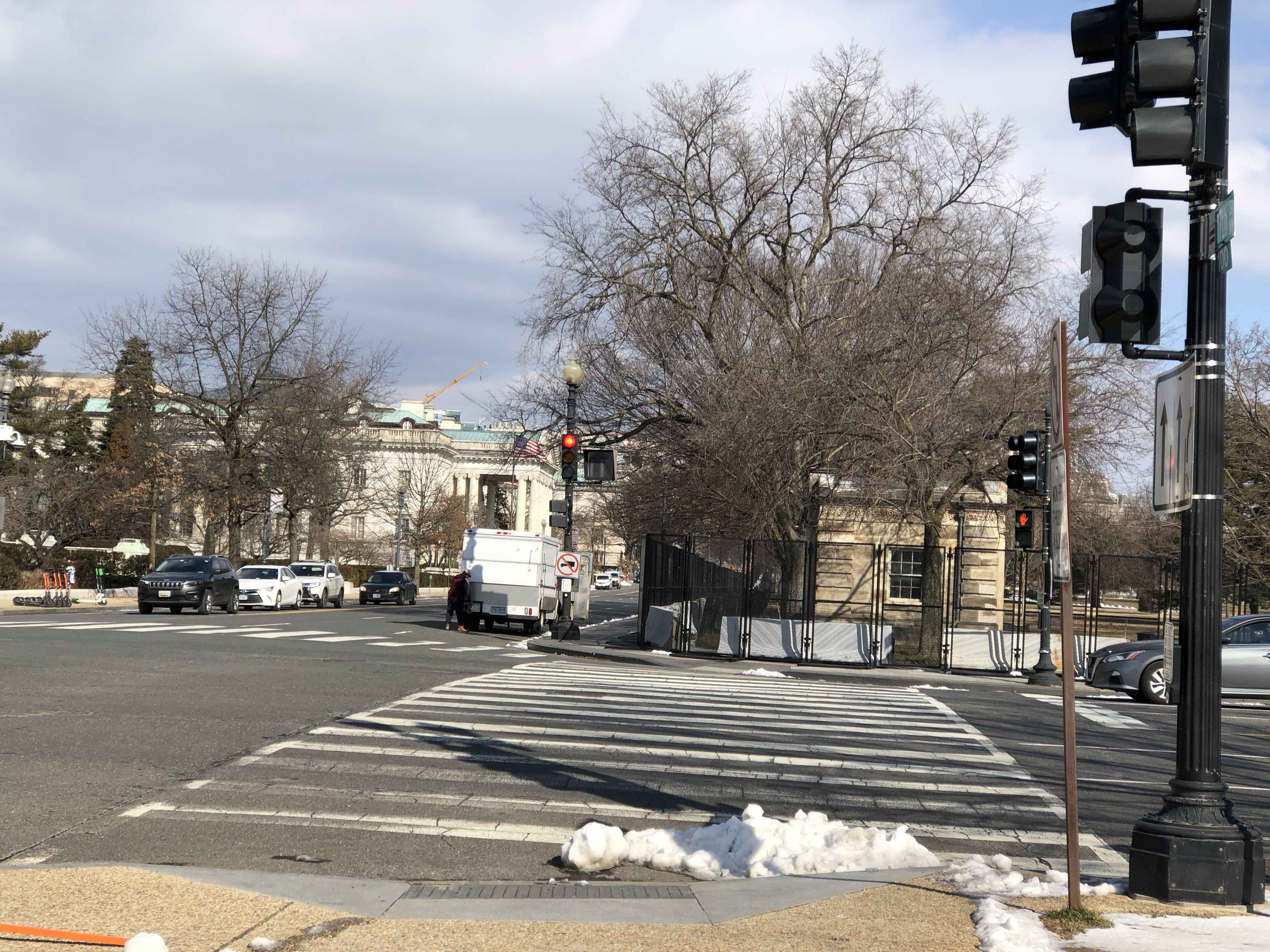 Pulling back a bit to get the scale, the fencing runs down 15th, across Constitution, up 17th, and across (at least, again, I didn’t go all the way up) Pennsylvania (that has long been fenced off). 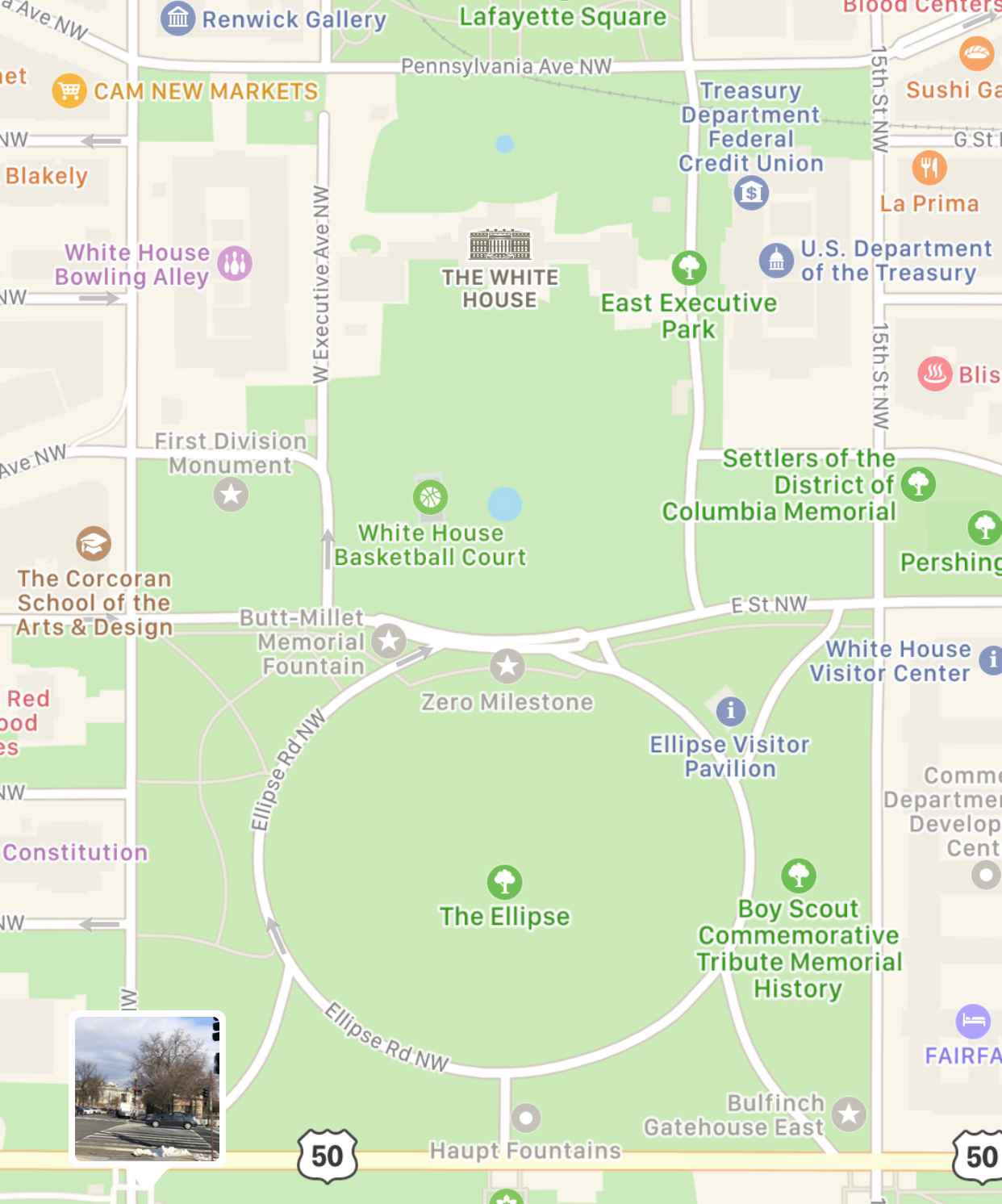 I tried to do justice to what it’s really like to walk these fences, just the awfulness of it all, the extent of it, the razor wire, the armed troops, and the rich irony of doing all that while walking along “Independence” and “Constitution” Avenues.

I would like to end on a hopeful note. This is a beautiful city, and a country of rich heritage that is as imperfect as the human condition, and as filled with potential for greatness and beauty as the human mind and spirit.

It does not have to be the way it is now unless we permit it. 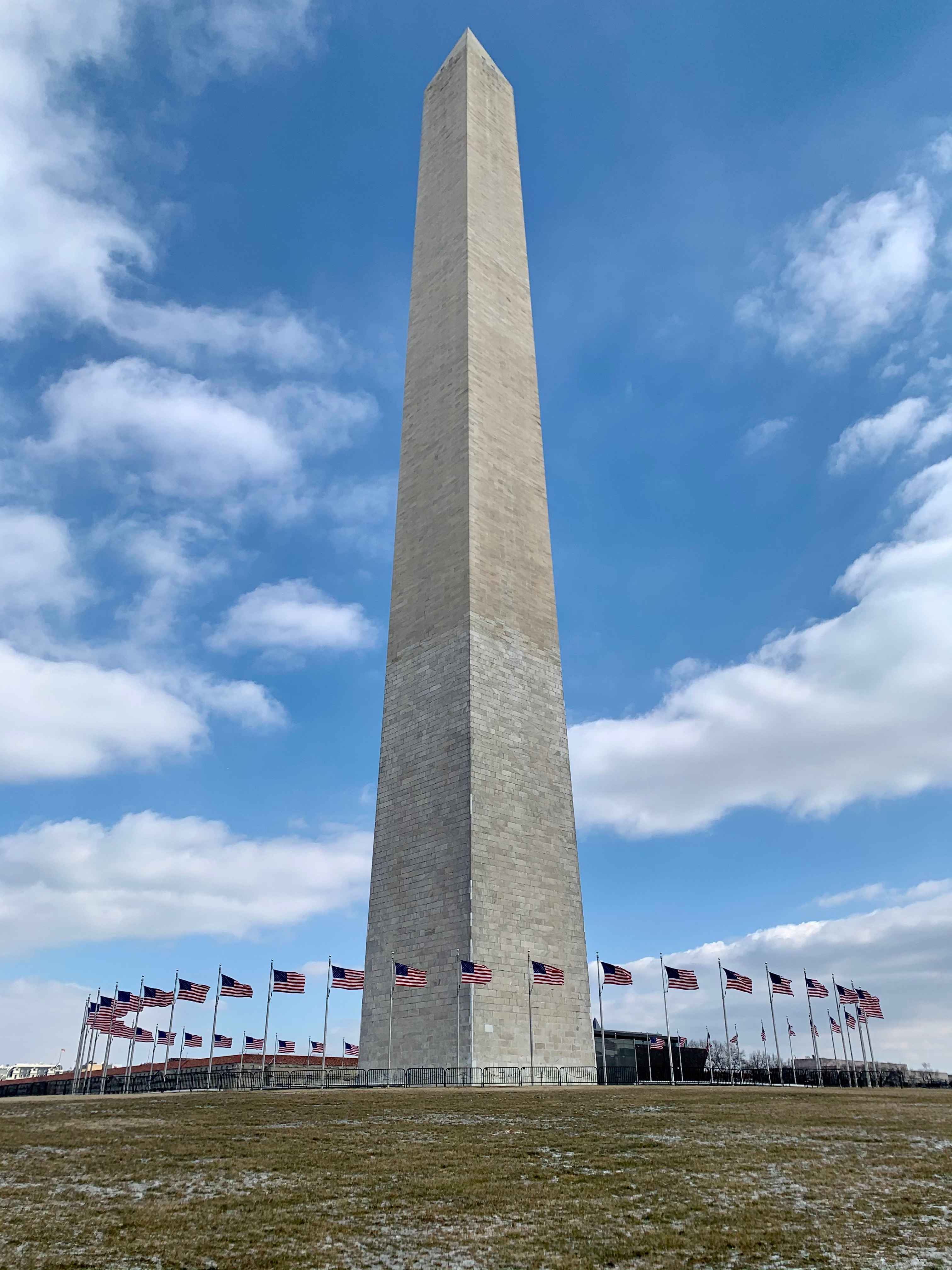