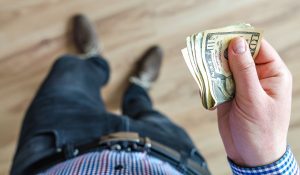 Citizens of New York City are being offered $100 to take the booster shots for COVID-19. Outgoing Mayor Bill de Blasio announced the move during a Tuesday press conference, saying the cash-grab is a “limited-time opportunity” and will be “by far the biggest booster incentive program” created in the United States.

“We want everyone, right now, as quickly as possible, to get those boosters. And we’re going to make it even better for you with a new incentive and an incentive that is here just in time for the holidays,” the mayor said, adding that the rewards will be offered at any city-run vaccination site and certain partnered locations. “As of today, we’re announcing a $100 incentive for everyone who goes out and gets a booster here in New York City, between now and the end of the year,” DeBlasio said.

The new program mirrors a similar initiative unveiled earlier this year, in which officials also offered $100 to residents who received their very first vaccine dose, though the prior attempt did not appear to have a major effect on immunization rates in the city. –RT

People are going to willingly line up for their booster shots to receive their $100.  Never before in history has there been such a push to inject everyone on this planet. If not enough take these shots, punishments will be doled out as well.  We have already seen just how far they are willing to go to get everyone injected, now we will see how far the population will go to either obey and take it or disobey and not comply by refusing to take the shots.

Medical Journal: Get The COVID-19 Vaccine, Or Be Punished HARSHLY

Resisting Tyranny Depends on the Courage to Not Conform

Stay alert and remain prepared.  Things haven’t stopped just because we are in the holiday season.  Their goal remains the same: get as many of these shots injected into as many human beings as possible.

The post New Yorkers Offered $100 To Take The Booster Shot first appeared on SHTF Plan – When It Hits The Fan, Don’t Say We Didn’t Warn You. This article has been contributed by SHTF Plan. Visit www.SHTFplan.com for alternative news, commentary and preparedness info.