This article was originally published by Ethan Huff at Natural News under the title: Lake Mead is less than 150 feet away from becoming a “dead pool,” making much of the Southwestern U.S. uninhabitable

America’s largest reservoir is drying up fast, which could make states like Nevada, Arizona and California, and parts of Mexico, no longer livable in the not-too-distant future.

Lake Mead, which generates just under 40 percent of Las Vegas’ power supply via the Hoover Dam, currently sits at just under 1,044 feet. It is less than 150 feet away from becoming a “dead pool,” meaning no more water flowing through the Hoover Dam and no more electricity or water for every Southwestern city that relies on this resource for sustenance.

Since the beginning of March, Lake Mead has dropped by more than 23 feet, which is astounding considering its massive size – from one end to the other, Lake Mead stretches 120 miles. It turns out that Lake Mead has been dropping for many years.

Currently, the lake is at its lowest point ever since being filled nearly a century ago. And year after year, it drops continually lower due to prolonged drought conditions and possibly other factors.

“If Lake Mead were to keep dropping, it could be a couple of years until a danger zone at 895 feet is reached, which is the point water would no longer pass through Hoover Dam to supply California, Arizona, and Mexico,” reports Zero Hedge.

How much longer before the Southwest runs dry?

Keep in mind that Lake Mead, like many other western water reservoirs, starts off wide at the top and gets narrower the deeper you go. This means that as water levels drop, so does the surface area of the lake. 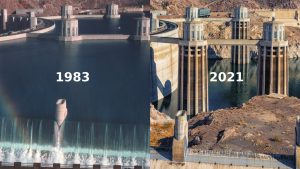 Over time, the level of the lake drops exponentially more quickly, which some say is what we are now seeing as water levels plummet increasingly faster, unearthing submerged boats and other debris that since sinking have never seen dry land or the light of day until now.

Tanya Trujillo, the Interior Department’s assistant secretary for water and science, issued a stark warning the other day saying “we have an urgent need to act now.” If nothing happens and the lake hits dead pool levels, then it is game over for tens of millions of people living in the Southwestern United States.

At full capacity, the Hoover Dam’s 17 turbines can produce 2,074 megawatts of power. As water levels have dropped over the years, that capacity has been dwindling and is currently down about 33 percent.

According to reports, the dam is currently producing enough electricity to power 675,000 homes. This is down from about one million homes at peak production levels.

Hendrix says he has been watching Lake Mead’s water level drop every year for 22 years since he first joined the Bureau of Reclamation.

“The drought we’re in … we’re in the 23rd year of a record drought,” he is quoted as saying.

Roughly 50 percent of the power produced by the Hoover Dam goes to California, while 22 percent goes to Nevada and 20 percent goes to Arizona. Various Native American tribes also partake in the energy generated by its turbines.

“Vegas growth has been crazy for decades,” wrote someone at Zero Hedge about how explosive growth in the Southwest is adding more demand to an already worrisome situation. “Same with Arizona. Too many people taking a finite amount of water.”

“This is the result of weather weapons or geoengineering,” suggested another.