I am not going to cover things that well-informed normies already know: How Israel is a weird outlier in fertility by First World standards, and the collapse of fertility in the Islamic world; how life expectancy has been soaring nearly everywhere; the “Great White Death” in the US and how all races in the US outperform their counterparts elsewhere, except for American Whites, who live less than almost all Europeans. Nor am I going to cover truly banal stuff, such as how tiny Bangladesh has more people than Russia. Nor particularly controversial stuff such as Eurabia, Great Replacement, etc. which I have covered elsewhere.

For all of this you have websites like Our World in Data and books by Steven Pinker.

I am instead going to focus on the truly little known and esoteric that I happen to find most interesting, especially from a historical or futurist perspective. 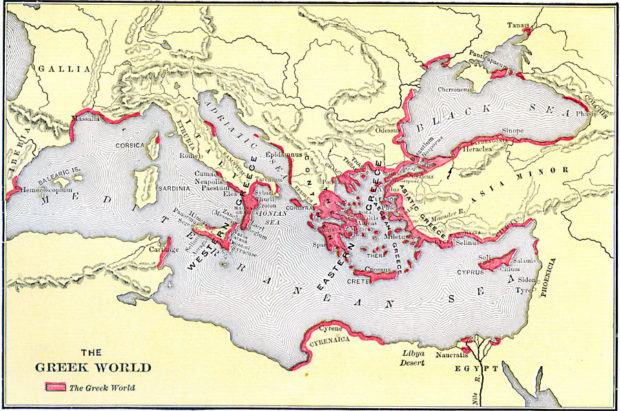 (1) The world population of Greeks has been steady at ~10 million since the age of Alexander the Great. Their percentage of the world total plummeted from ~5% to slightly more than 0.1% today.

(3a) Comparing the populations of modern nation-states to their medieval (pre-Black Death) counterparts is a fascinating exercise:

(3b) So despite the vast losses of Russia’s demographic potential during the 20th century, it still did rather well in the long-term, increasing its share of Europe’s population from ~5% to ~20% (~25% if inc. UKR/BEL). Swapped places with France in this respect. Glory to the musket and the potato!

(3c) At a larger scale, while both Europe and China were at ~100M in Middle Ages, now China has twice as many people, 1.4B to 700M. The advantages of backwardness – delayed fertility transition left more time for population to soar. 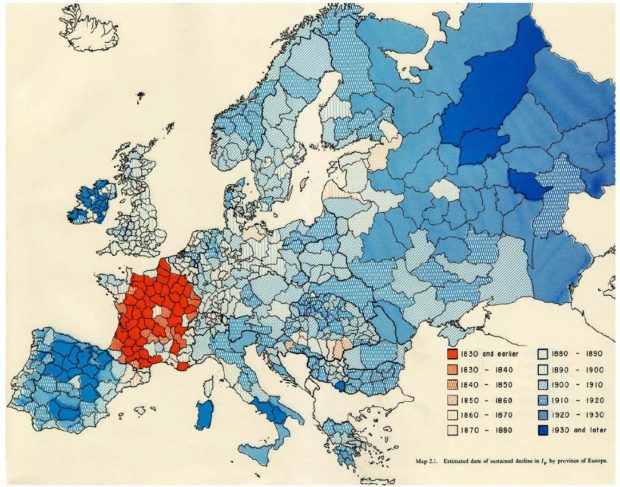 (4) France was the world’s first modern nation to undergo the fertility transition. It had its genesis with the French nobility during 18C. Subsequently, France would fall from having 1/5 Europe’s population in Middle Ages to <10% by late 19C. 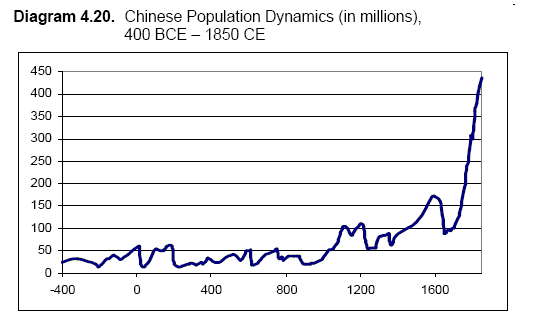 (5) Huge demographic losses on the level of World War II in Eastern Europe were typical in the Malthusian era. 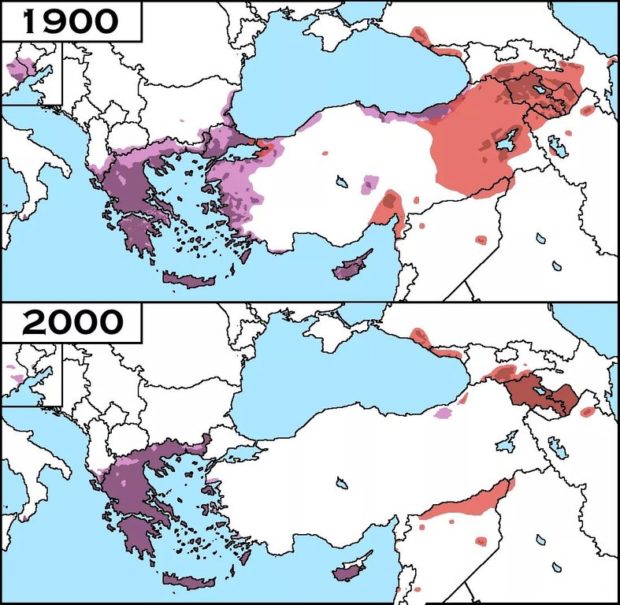 (6) Were the Turks the big demographic winners of the 20th century?

(7) The population ratio between Russia and the Ukraine fell from less than 3:1 to almost 5:1 since 1992. It is ironic that Ukrainian independence has been worse for Ukraine’s population balance vis-a-vis Russia than anything that Lazar Kaganovich and the Nazis did. 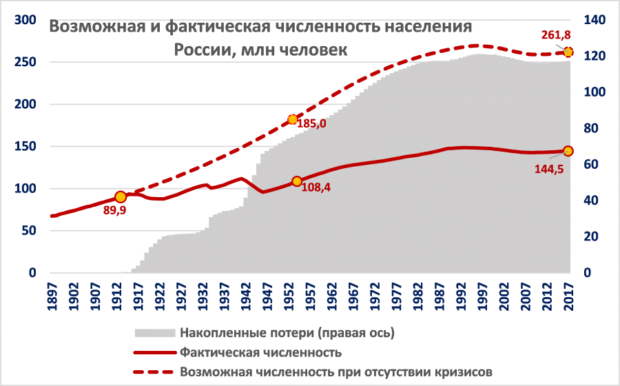 (8a) Russia just within its current borders, assuming otherwise analogous fertility and migration trends, would have had 261.8 million people by 2017 without the triple demographic disasters of Bolshevism, WW2, and the 1990s – that’s double its actual population of 146 million.

(8b) According to my very rough calculations, based on various sources, the population change for each of the following in their current borders between 1913/14 and 1945/46 was about as follows:

Assuming a threefold expansion in all of these populations, we could have been looking to a Russian Empire or Republic with a further ~120M fully Russified Belorussians and largely Russified Ukrainians, for a total Slavic population of almost 400M.

That’s twice bigger than the number of White Americans today, the most populous single European ethnicity, and almost as much as all of today’s Western Europe. 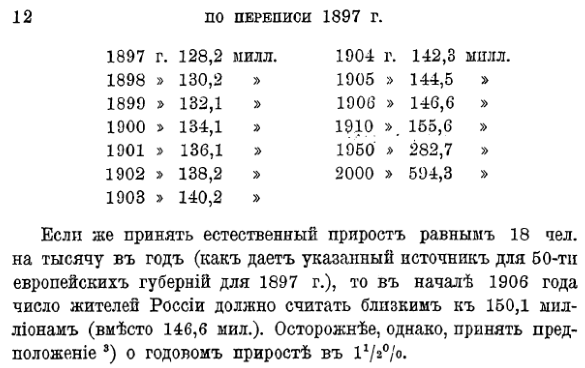 (8c) Total population of a hypothetical Russian Empire that also retained Central Asia and the Caucasus, and that hadn’t been bled white by commies, Nazis, and Westernizers during the course of the 20th century, would likely have been not that far off from Dmitry Mendeleev’s 1906 projection of 594 million for 2000.

(9) So far as I can tell, the Latvians, Estonians, and Ashkenazi Jews are the only peoples with fewer people today than in 1914. It is ironic that they played the most disproportionate roles (per capita) in cementing Bolshevism in Russia. God must really hate commies.

(Even if, as Myers argued, Songun/Juche has almost zilch to do with Marxism).

This seems rather important given China’s importance.

(14a) Russia’s middle-aged male mortality in the 1990s and early 2000s was worse than under late Tsarism. In particular, alcohol abuse accounted contributed to about a third of all deaths. (This has all since drastically improved). 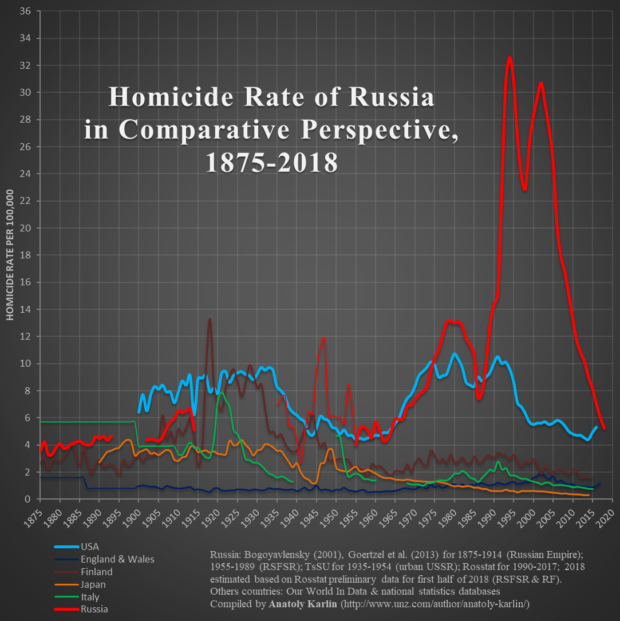 (14b) Contra Pinker, Russia has seen a “de-civilizing” process in terms of homicide rates (and many other indicators of social wellbeing) in the last third of the 20th century. This was perfectly correlated with its alcoholization epidemic.

Of course, there is still plenty of lost ground, since c.1900 Russia’s rates were similar to those of Italy, Finland, and Japan, whereas all these countries are now at least 5x less violent. 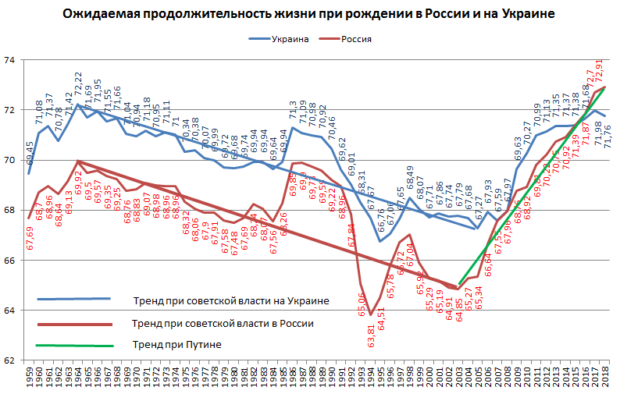 (14c) During the later Soviet era, the Ukraine consistently had a 2 years higher life expectancy than Russia – a difference that dates back well to the 19th century (probably on account of them drinking less, even back then).

But Ukraine has been stagnating since early 2010s; still below its 1960s all time peak, Russia overtook by 2018. 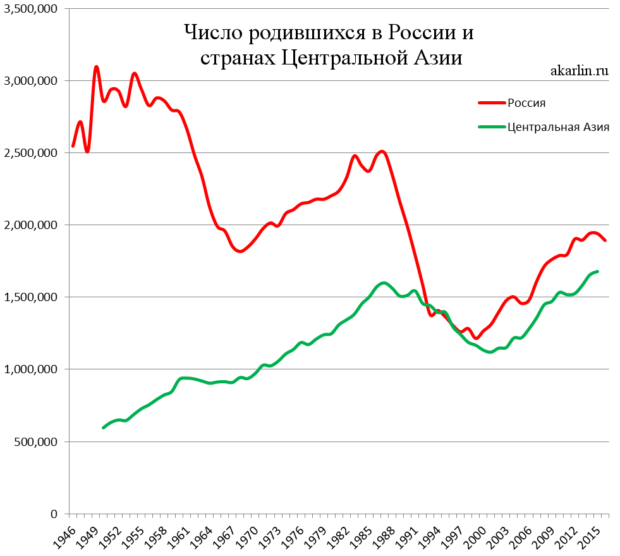 (15) Central Asians went from 10% of Russian population in 1914 to half today, while births have almost equalized since the early 1990s.

Central Asians increasingly looking to work in South Korea, which is ~20 years ahead of China in terms of demographic and socio-economic development. Once China’s urbanization maxes out at ~75-80% by ~2040, I expect labor migration from C. Asia to reorient there.

Loading...
"Not by might, nor by power, but by my spirit, saith the Lord of hosts." Zechariah 4:6
Read it..
BEFORE IT'S NEWS
SIGN UP FOR OUR NEWSLETTER
Today's Top Stories
Jim Willie: Coronavirus & Global Reset Updates! - Must See Video!
X22Report: We All Knew, Durham, No Report, Just Indictments, Panic WW - Great Video!
Q: Are You Awake Yet? Coronavirus White Hat Weapon? Democrats Have Gone Full Socialist! - Great Video!
Anunnaki Amongst Us, Meet a Nephilim Hybrid, Blood Anomalies & Physical Evidence, Michael Lee Hill
Tucker Issues Warning As Democrats Do The Unthinkable: Consider Yourself Warned!
You Better Take a Look at THIS and PREPARE NOW!
Elites Warn Of Global Pandemic! What You're Not Being Told
Q Anon: George Soros Warns of Revolution!|
CORONAVIRUS - Another Masonic Ritual (Russian Vids)
Russia Sends Two Warships Armed With Cruise Missiles To Prevent Turkey From Launching Full-Scale Invasion Of Syria
Loading...
Featured
Roger Stone deposition
Definitely worth the read: Oath Keepers Coronavirus Warning and Advice on How to Protect Yourself
Steve Quayle & Robert Griswold - Haunting, Hope for Screams in the Darkness
Elites Warn Of Global Pandemic! What You're Not Being Told
The Coronavirus Vaccine as a Source of Dangerous Invasion
Dave Hodges & Bob Griswold (2/28/2020): What You Need to Know About the Supply Chain
Don’t let anyone say they don’t know 5G will kill
When It Comes To Protection From The Coronavirus, You're On Your Own! - Great Chris Martenson Video!
Watch the Last 21 min. of Today's Unexpected 620 Point Stock Market Rally in 2 Minutes!
You Better Take a Look at THIS and PREPARE NOW!