Russia Banned From All Sports for Doing Russia Stuff

Russia has been banned from all sports for the next four years, including the Olympics, the World Cup, and the Magic: The Gathering World Championship (I hear Putin keeps an illegal Chaos Orb card up his sleeve at all times).

The World Anti-Doping Agency handed down the ruling in response to everybody in the country being doped up to their eyeballs on performance-enhancing drugs 24-seven.

(On a recent visit to Moscow, I was dunked on by an 84-year-old babushka in a 3-v-3 pickup game. And yes, we were shirts, they were skins.)

During the 2014 Sochi Winter Olympics, investigators discovered Russian operatives engaged in widespread cheating to cover up a state-sponsored doping scheme.

Russian “anti-doping experts” and members of the intelligence service broke into the Sochi testing labs and replaced the jacked-up urine samples of Russian athletes with clean urine collected months earlier.

For this bout of rousing sports espionage, the old red bear got a slap on the wrist and a temporary ban from competing in the Olympics.

After a brief period, in which Russian athletes were permitted to compete under a neutral flag, Russia was allowed to return to the world of kicking and throwing stuff as hard as you can under the condition that they turn over all the data from the doping scheme to WADA.

But if there are two things we know about Russia, it’s that they hate transparency and will never admit to doing anything wrong. (To this day, World War I is referred to in Russian history books as “that time we totally intentionally made a Poland.”)

In the years since, Russia has turned over a mountain of data. But according to WADA investigators, hundreds of files have been altered or deleted to cover up the government’s role in the scandal and blame everything on the lab director Doctor Grigory Rodchenkov (who definitely did a whole bunch of doping but went on to become the whistleblower who alerted WADA to Russia’s widespread cheating).

“The Moscow data were neither complete nor fully authentic,” WADA said in a statement. “As comprehensively outlined in the reports, some data were removed, others altered and, in some cases, system messages were fabricated in an effort to hamper the work of WADA investigators.

“In addition, measures were taken to conceal these manipulations by back-dating of computer systems and data files in an attempt to make it appear that the Moscow data had been in their current state since 2015.”

Under the ban, Russian athletes (with good clean pee) can compete in sports under a neutral flag. The unattached athletes will not be allowed to wear their country’s official gear. The Russian national anthem will not be played (a relief for anyone with ears). And Russia administrators will be strictly forbidden from traveling to the Games.

The only exception is next year’s European soccer championship. Because it’s being held in Saint Petersburg and that would just be awkward for everyone involved.

“For too long, Russian doping has detracted from clean sport,” WADA President Craig Reedie said. “Russia was afforded every opportunity to get its house in order and rejoin the global antidoping community for the good of its athletes and of the integrity of sport, but it chose instead to continue in its stance of deception and denial.”

Russian officials called the decision “unacceptable” and said, “wah, wah, nobody listened to us.”

French pharma company Sanofi SA announced its acquisition of cancer-focused Synthorx Inc. for $25 billion today. (Is it just me or do pharma companies always sound like rejected wizard names from Lord of the Rings fanfic?)

Sanofi said it will take control of all outstanding shares of the evil wizard Synthorx at $68 a share, a 172% premium on the cancer company’s closing price Friday.

Shares of Synthorx (who managed to lock down the very cool stock ticker THOR) surged about 170% when the markets opened this morning.

For the last few years, Sanofi’s top performer has been a blockbuster diabetes medicine called Lantus. But the Yellow Wizard of Insulin has failed to keep pace with medical breakthroughs made by rivals Novo Nordisk and Eli Lilly.

The acquisition of Synthorx will expand Sanofi’s existing immuno-oncology portfolio and signals a shift away from diabetes products to the always popular cancer market (much like pharmaceutical giant Gandalf pivoted away from hobbit research to focus on Balrog stuff).

“This acquisition fits perfectly with our strategy to build a portfolio of high-quality assets and to lead with innovation, as you will hear at our Capital Markets Day tomorrow, December 10,”Sanofi Chief Executive Paul Hudson said in a statement.

“Additionally it is aligned with our goal to build our oncology franchise with potentially practice-changing medicines and novel combinations.”

Analysts predict that with this acquisition, Sanofi with likely narrow its drug-development pipeline, focusing more on specialty diseases like cancer and less on diabetes, which just isn’t as fun as it used to be.

Walmart has pulled a line of Christmas apparel depicting Old Saint Nick having just a little bit too much fun after receiving complaints from customers and getting dunked on by Twitter a whole bunch.

The big box company (that makes its employees wear tasteful khakis while customers zip around the store like half-naked extras from a Mad Max movie) apologized for a series of adult-only Christmas sweaters available on the Walmart Marketplace website.

The sweaters in question depicted the whimsical fat immortal enjoying a big old pile of cocaine, “roasting his bare chestnuts” on an open fire, and various other R-rated activities that don’t evoke the traditional Santa Clause mythos. (As we all know, Kris Kringle has a strong preference for edibles.) 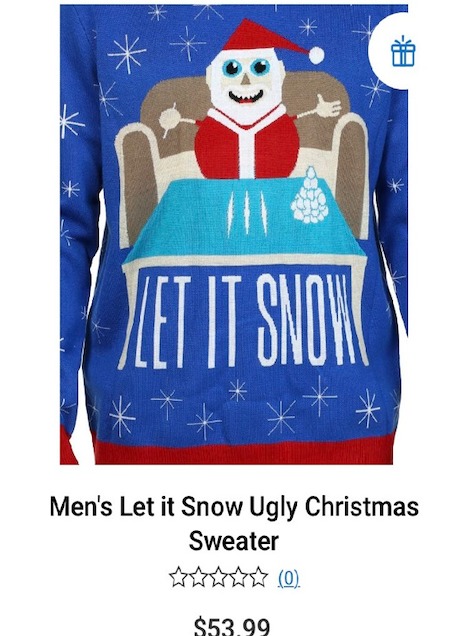 So this is how he makes it to every house in one night.

The criminally overpriced sweaters were available from a third party seller on the Walmart Marketplace — an online portal on which sellers can sell their goods with Walmart’s approval.

“These sweaters, sold by a third-party seller on Walmart.ca, do not represent Walmart’s values and have no place on our website,” said a spokesperson for Walmart, who probably didn’t need to say that a beloved children’s character honking lines of blow was not part of the store’s value system.

“We have removed these products from our marketplace. We apologize for any unintended offense this may have caused.”

Walmart has since pulled the items from its site. But I highly recommend that you check out the modern American masterpiece that is the description for the Walmart Cocaine Santa Sweater: 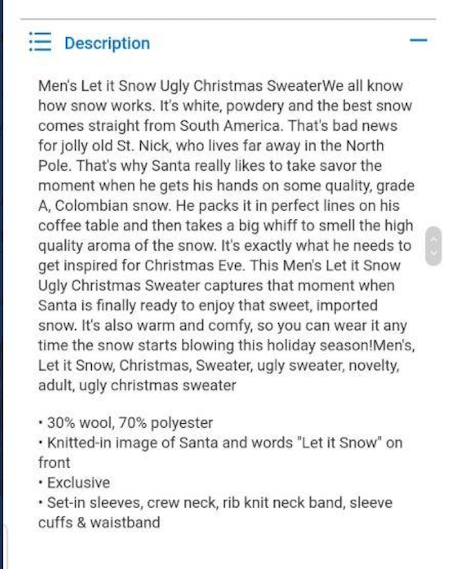 Earlier this year, we did a basket of reporting on the old socioeconomic crisis in Venezuela.

For a time, it looked all but certain that Dictator Nicolás Maduro would be ousted on his authoritarian keister and we’d see democracy reinstated in the South American country.

The opposition party was energized unlike it had been in years (it’s hard to be politically energized when the government has a tendency to disappear politically energetic people). The international community had turned its back on Maduro (and his stereotypical dictator mustache). And oil sanctions had apparently severed the regime’s only avenue for funding.

VP Mike Pence even took a trip on down to Venezuela with Mrs. Pence to show U.S. support for the opposition, declare the end of the regime, and eat a bunch of empanadas. (I’m joking of course. There’s no way Mike Pence eats empanadas.)

And yet, here we are, getting ready to ring out the year with too much food and not enough booze and Old Saint Nic is sitting pretty on his throne in Venezuela.

Well, as it turns out, when it comes to dictators with an iron grip on the military and an insatiable lust for empanadas, there’s no such thing a sure thing.

A number of annoying little coincidences (and a global underground black market for gold) have contributed to undermining the movement to oust Maduro and handed control back to the empanada-loving dictator:

The combined effect of all these factors was to deflate a revolution, waste a whole load of people’s time, and make Maduro’s hold on the country stronger than its been in years.

“Maduro is probably feeling better about himself right now than he has in the last several years,” Fernando Cutz, a former official of the U.S. National Security Council who worked on policy toward Venezuela, told the Wall Street Journal.

“I am less optimistic right now than I have been in the last three years. I don’t see any reason to forecast that 2020 will bring positive change for the people of Venezuela.”


Source: http://freedombunker.com/2019/12/09/walmart-apologizes-for-cocaine-loving-santa/
BeforeItsNews Announcements
Step 1: Get the Telegram App & Get Stories Direct to Your Phone or Computer Without Censorship! Get the Telegram App in the App Store or at
https://telegram.org/