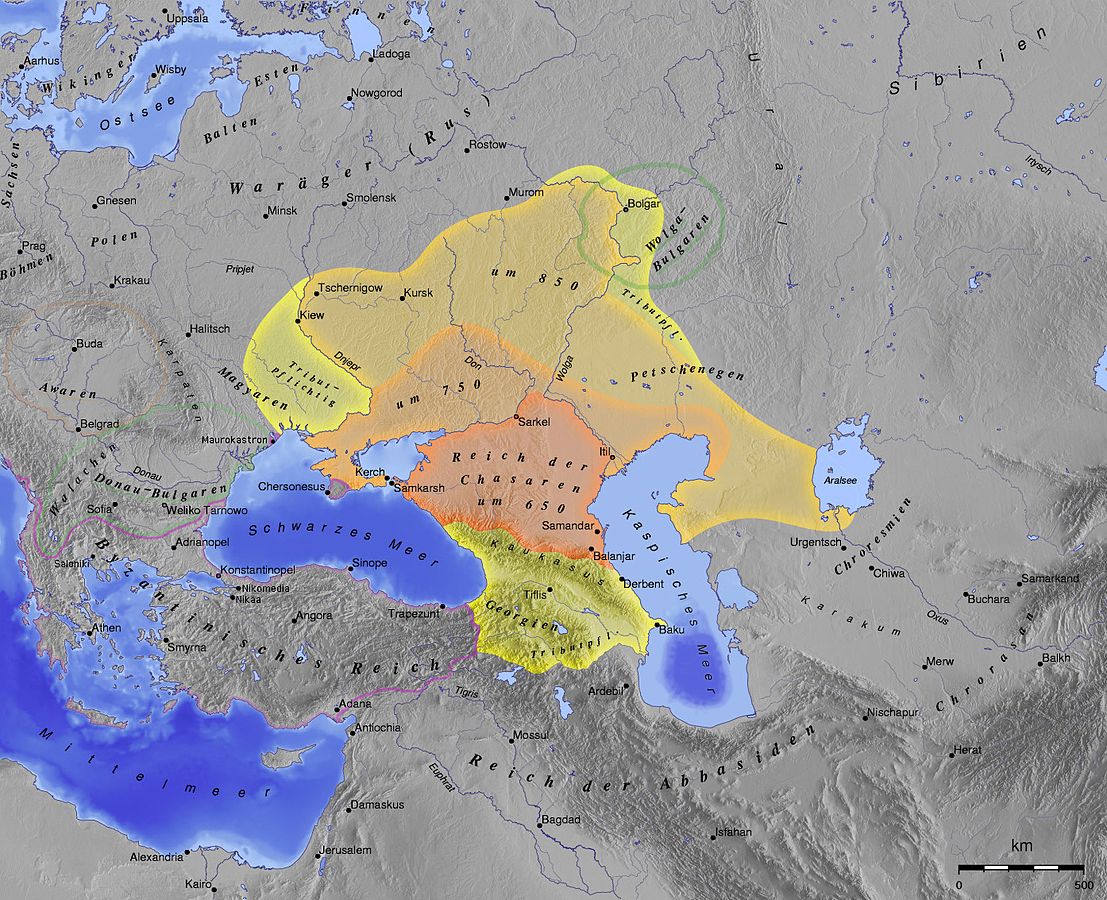 The list of extinct countries includes the better known ones like the USSR (aptly dubbed “the Evil Empire” by Ronald Reagan) and Yugoslavia, as well as hundreds of largely forgotten others like Majapahit, Assyria, Babylonia, Burgundy, and the Ottoman Empire. Far more countries are long gone, in fact, than the 195 on the map today. As a history lover, I’ve never yet discovered a country whose inhabitants’ experience was devoid of interesting facts and lessons.

Take Khazaria, for example. It lasted over 300 years (650 to 965 AD) and covered more territory than the combined Scandinavian nations of our time. It spanned the eastern half of modern-day Ukraine, the steppes of the Volga-Don region of present Russia, the entire Crimean Peninsula, and the northern Caucasus. Its southern portion took in most of the shorelines of three seas: the Black, the Caspian and the Aral.

It’s my thesis that for a country to be “successful” for a considerable period—success being defined loosely here as economically prosperous, politically stable, and militarily defensible—it must possess substantial TTD. That’s not a pronounceable acronym, unfortunately, but it stands for trade, tolerance and decentralization.

Each of these three criteria for success is worth volumes of discussion but here’s the nub of it: When economic freedom and private property exist, trade flourishes. And trade is what peaceful humans do to satisfy wants and improve material well-being. Choke it off and living standards plummet. Tolerance is a sign that people appreciate the benefits derived from diversity in personal choices. An intolerant people deprive themselves of what others can offer and waste time and resources fighting instead of collaborating. Decentralization preserves the rich identities of local communities and stymies the concentration of authority with its inevitable corruption. Power dispersed is power tamed.

So a successful country is one that can boast a lot of TTD. It encourages exchange, celebrates diversity and avoids top-down, political command-and-control. Almost every “failed state” in history did just the opposite by stifling commerce; stoking racial, ethnic or nationalistic hatred; and/or installing a dictatorship.

Khazaria, to its great credit, practiced remarkable measures of trade and tolerance and enough decentralization to prevent its government from sabotaging either one. In the end, it met its demise not from internal decay but from foreign assault.

A Turkic people, the Khazars asserted their independence from a weakened Western Turkish Empire in the middle of the 7th Century. The overland routes they built connected to the famous “Silk Road,” which in turn linked Europe with Asia. Khazaria’s geographical position provided unique economic advantages its people eagerly embraced, much as a small town grows when a new interstate highway opens a few miles away. Khazaria became a bridge between East and West, which meant that not only could its people easily engage in trade with others in either direction, they also witnessed a plethora of exotic goods and travelers moving through the region.

Khazaria provided safe passage and imposed minimal taxation on traders, making the country one of the medieval world’s thriving commercial crossroads. The Arabs to the southwest highly prized Khazarian furs and clothing. The Khazars traded their own silver coins for mirrors from China. The game of chess likely originated in Khazaria, which exported it to Europe. Archeologists have found evidence that Khazarian traders journeyed as far as Sweden. A 10th-century geography book written in Persian, Hudud al-‘Alam (“The Regions of the World”) said of Khazaria, “This is a very pleasant and prosperous country with great riches.”

If you traveled across Khazaria as a trader, carrying goods to such neighboring jurisdictions as Byzantium or modern-day Iran or Russia, the provincial Khazarian governor would tax you at the exit point at the rate of 10 percent of the value of the goods. Not bad, considering you enjoyed the Khazars’ hospitality and protection along an otherwise long and dangerous journey.

By the 19th Century, scholars began using the phrase Pax Khazarica (the Peace of Khazaria) to describe the rule of the Khazars over the region and its important trade routes. Some interesting photos and sketches of Khazarian artifacts can be viewed here.

What about tolerance? From all indications, the Khazars practiced it and benefited immensely from it. In an 1835 essay, Russian historian Vasilii V. Grigoriev wrote:

The Khazar people were an unusual phenomenon for Medieval times. Surrounded by savage and nomadic tribes, they had all the advantages of the developed countries: structured government, vast and prosperous trading, and a permanent army. At the time, when great fanaticism and deep ignorance contested their dominion over Western Europe, the Khazar state was famous for its justice and tolerance. People persecuted for their faiths flocked into Khazaria from everywhere. As a glistening star it shone brightly on the gloomy horizon of Europe.

Religious and ethnic-based tyrannies claimed untold legions of lives in endless wars in the medieval era, but Khazaria developed a polyglot society of multiple faiths and peoples. Richard A. E. Mason’s article in the Winter 1995 edition of The Ukrainian Quarterly, “The Religious Beliefs of the Khazars,” reveals,

The apposition of peoples and cultures led… to a blossoming of both material and spiritual culture among the Khazars. It also formed the basis for the remarkable symbiosis of varying systems of religious belief and practice which held sway and formed so unique a characteristic of the Khazar state throughout its whole history, accompanying it right down to its tragic fall. The religious beliefs current amongst the inhabitants of the Khazar state were as many and varied as these peoples themselves.

The liberality of the Khazars was especially good news to the Jews of the time, who were routinely persecuted in Christian Europe and the Islamic Middle East. Describing Khazaria as “a beacon of hope” for Jews, Kevin Alan Brook notes:

Jews were able to flourish in Khazaria because of the tolerance of the Khazar rulers, who invited Byzantine and Persian Jewish refugees to settle in their country. Due to the influence of these refugees, the Khazars found the Jewish religion to be appealing and adopted Judaism in large numbers.

In his 1996 book, Chronicles of the Jewish People, Raymond Scheindlin opined that while Jews in the early Middle Ages were a subject people everywhere and frequently persecuted:

Khazaria was the one place in the medieval world where the Jews actually were their own masters….To the oppressed Jews of the world, the Khazars were a source of pride and hope, for their existence seemed to prove that God had not completely abandoned His people.

The tolerance of the Khazars, while notable for its day, went only so far. Like virtually every other country in world history, Khazaria was not immune to the temptations of slavery and the slave trade. With government approval, some Khazars captured neighboring Slavs and tribesmen to the north, then sold them in lucrative Muslim slave markets in Persia and the Middle East. On the issue of slavery, any objective historian must grade nations “on the curve” so to speak—or else all but a handful would flunk. Khazaria should probably get a “B” because slavery there appears to be much less commonplace than it was among its neighbors.

All in all, for a country amid what some historians consider the Dark Ages, Khazaria was an oasis of enlightened tolerance.

Evidence of decentralization exists but is less conclusive. We know this much: Scribes of the period—both local and foreign—didn’t write about the country as if life revolved around the politically powerful. Khazaria maintained a monarchy but a rather unique dual one, with a “kagan” and a “bek” dividing power at the top.

A seven-member Supreme Court in the Khazar capital of Atil was “a model of tolerance and peaceful coexistence,” according to Brock in his The Jews of Khazaria, because it was purposely composed of two Jews, two Muslims, two Christians, and one pagan. Assuring that no one faith dominated the judiciary is a form of decentralization.

Collection of taxes and customs duties were a responsibility not of the central government in Atil, but of provincial governors. Cities were led by the Khazar equivalent of elected mayors. They were known as “babaghuq,” meaning “father of the city.”

A few hundred years later, the Incas of Peru established perhaps the most centralized regime in world history. As explained in “The Incas and the Collectivist State” by Richard Ebeling, the rulers of that society possessed total, unquestioned power as they “imposed a compulsory egalitarianism in virtually all things.” Nothing of that sort ever took root in the far more liberal Khazaria.

There’s ample reason to believe that TTD—trade, tolerance and decentralization—flourished in relative abundance for three centuries in now-forgotten Khazaria.

Sadly, Khazaria’s end was brutal, sudden, and total. Determined to subjugate Constantinople, the Russian warlord Prince Sviatoslav knew he had to remove Khazaria as a geopolitical obstacle. In the 960s, he led a massive invasion that wiped the Khazar state from the map and destroyed its capital as completely as the Romans had extinguished Carthage more than a thousand years before. It was said that the destruction of Atil was so absolute that “no grape or raisin remained, no leaf on a branch.” Not until 2008 would archeologists discover where the city even was, on the northwestern shore of the Caspian Sea.

Long live the spirit of Khazaria!