The conversation about the future of the police shifted dramatically after the death of George Floyd on May 25. At first most people doubtless assumed that activists would demand a series of reforms to American police departments. And yet before we knew it, the call to “defund the police” was being heard everywhere.

So far, though, calls to defund the police have been fraught with confusion.

On social media, curious observers have wondered how people will acquire security services in the absence of police. In response, many defenders of the “defund the police” cause have impatiently lectured them (“do your research!”), explaining that of course defunding the police doesn’t mean reducing their budget to zero. “Defund the police” means the police will be funded, but we’ll just rethink the way they operate.

Have these people ever looked up the word “defund” in the dictionary? 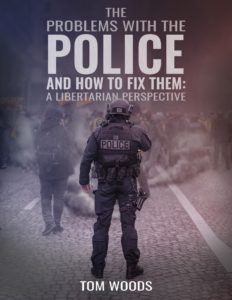 But others, meanwhile, seem genuine in literally wanting to defund the police.

The president of the Minneapolis City Council, for example, said she looked forward to a “police-free future,” and therefore does appear to have wanted to defund the police in the ordinary sense of the word. But when asked what people should do if their homes are invaded, replied that, well, maybe it’s about time they got a taste of how the marginalized feel.

Still others say we need social workers to do some of the work we’ve been assigning to police.

Oh, that sounds great. So instead of shooting your dog, they’ll take your children away.

These are not very good answers, to say the least.

Yet the cause of defunding the police is not without merit. It is the correct view, in fact. The problem with the standard proposals is that they are not nearly radical enough.

What we need is a separation of police and state.

We need an end to victimless crimes, which are a major source of unjust profiling and harassment. You cannot meaningfully “defund the police” while still intending to harass the public with an endless array of intrusions and regulations.

Now to be sure, there are reforms that can be made that can do some good.

We can start by demilitarizing the police, both in equipment and in approach. We might decentralize police forces and make sure officers live in the neighborhoods they patrol, thereby reducing the chances of misunderstanding and conflict, and increasing the likelihood of nonviolent conflict resolution.

The recent challenge to “qualified immunity,” a doctrine that makes it easier for police to get away with rights violations and more difficult to hold them accountable, should be supported.

We should confront police unions and recognize their role in establishing provisions that obstruct police accountability.

But as long as we refuse to entertain original thoughts, and instead stay wedded to the monopoly model for police, there will be problems. The predictable results of any monopoly are less satisfactory service at ever-higher prices. There is no reason to expect that security provision to be any different.

Want to defund the police? Start by busting the monopoly.

And read some of the best libertarian voices on police in my new, free eBook: The Problems With the Police and How to Fix Them: A Libertarian Perspective.

The post The Pretend ‘Defund the Police’ Movement, and the Real One appeared first on LewRockwell.