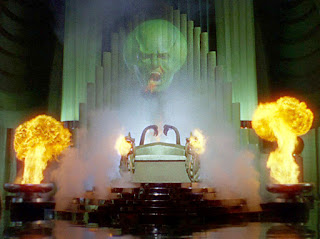 The great Victor Davis Hanson explains the bizarre Biden campaign in “Biden: The Great and Powerful” at American Greatness.  From the article:

So the lightweight Biden was reflated as a sort of centrist hot air balloon to be used to float the hard-Left basket carriage beneath across the election defining line.

But fusion/collusion is not just a matter of a Potemkin veneer. Biden’s agenda is a fantasy creation. His role was to save the party from Sanders, win suburbanites, and pander to the party’s socialist sympathizers of Antifa and the Black Lives Matter movement. That is an impossible task because today’s Democratic Party is a conglomeration of squabbling tribes and looney agendas.

The rioting, Biden insists, is due to police brutality but not due to it entirely. Trump’s COVID policies killed thousands, but Biden’s own bromides are either identical or would be less effective.

And on and on, as Biden is made to wink and nod to the Left that his only role is to get them elected before collapsing at the finishing line.

The media thinks this will work, and so owns the project. Biden will stay sequestered, visit a key state occasionally, pop out of the plane to say he is “barnstorming” Michigan or Wisconsin and then fly back into his Biden bunker for more Zoom puff interviews—and hope progressive polls show that he can endure weekly bleeding until November 3.

Every four or five days the media will blast the airways with, “Trump is ripping out mailboxes,” “Trump won’t concede and will have to be forcibly removed,” “Trump insulted our war dead as ‘losers’ and ‘suckers’ as he hid from the rain to keep his hair dry.” Most recently Bob Woodward’s book queued up for its turn of 72 hours of smears, right after gab-bag Jeffery Goldberg’s anonymous sources faded out.

Will this joint project of progressive ideologues of the Democratic Party and the major media work?