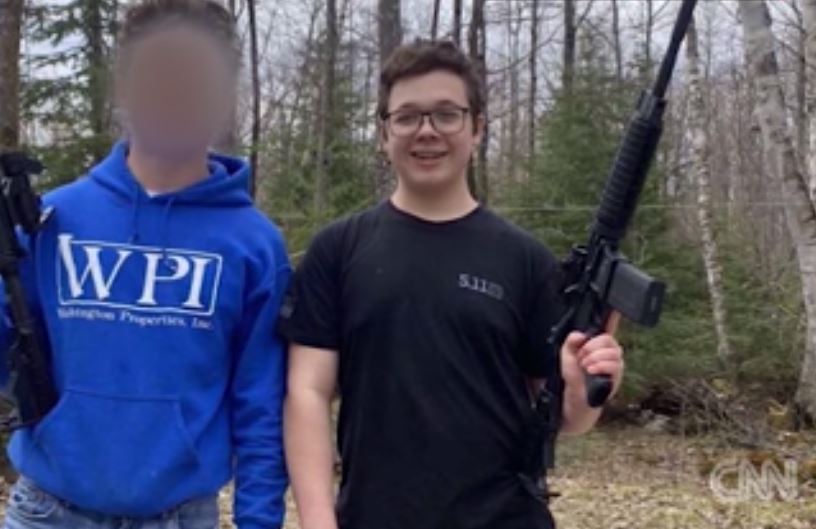 Last week Kyle Rittenhouse was taken into custody by police officers in his hometown of Antioch, Illinois.

The 17-year-old stands accused of first-degree homicide (and five other charges) in the shooting death of Joseph Rosenbaum, 36, one of two men killed in Kenosha, Wisconsin during riots that engulfed the city following the police shooting of Jacob Blake. (The riots began when Blake, a 29-year-old African American man, was critically injured after being shot seven times by members of the Kenosha Police Department, who were called to the scene because Blake allegedly was trying to steal the caller’s vehicle and keys.)

Here are the basic facts.

According to a criminal complaint, Rosenbaum chased Rittenhouse into a car lot and attempted to seize the AR-15 rifle of Rittenhouse, who opened fire, hitting Rosenbaum in the groin, back and hand. A second man, Anthony Huber, also was fatally shot after attacking and attempting to disarm Rittenhouse, the complaint says.

Rittenhouse, who reportedly was in Kenosha to assist police in the defense of local businesses, faces life in prison.

Vigilante Justice or Self Defense?

The summer of 2020 has seen no shortage of violence, but this event in particular has a sort of John Brown feel to it, and political lines have already formed.

Rep. Ayanna Pressley (D., Mass.) last week accused Rittenhouse of being a white supremacist. There’s no evidence at this time that Rittenhouse is what Pressley claims (though his entire digital record is likely being scrutinized). Instead, most reports describe Rittenhouse as a police wannabe and Blue Lives Matter advocate, and a supporter of President Donald Trump.

Whatever his politics, NPR reports explains that the Illinois teen finds himself at the center of hyper-partisan political debate.

“On the left, the suspect is portrayed as the embodiment of today’s domestic terrorism threat: A cop-idolizing wannabe militiaman who allegedly traveled across state lines to confront protesters with a gun he was not legally allowed to possess,” writes Hannah Allam. “On the right, the teen’s actions instantly were justified as self-defense, the natural end to ‘Democrat cities’ letting radical leftists maraud through the streets.”

Shootings in recent years have shown that the line between self-defense and homicide is often murky, and it’s quite possible that Rittenhouse’s fate may ultimately be decided by a jury of his peers.

Few would argue against the idea that Rittenhouse deserves competent legal counsel, a fair hearing, and his day in court like anyone else. In some ways, these efforts are already being frustrated because of the current politicized environment.

A GoFundMe campaign launched to raise funds for Rittenhouse quickly disappeared from the platform, and officials from the crowdfunding platform confirmed they terminated the campaign and returned the donations to the contributions.

Precisely why the campaigns were deleted remains unclear.

According to a Washington Times report, GoFundMe officials said the campaigns violated the companies terms of service but did not specify what terms had been violated. (The Times points out that the terms prohibit “activity that GoFundMe may deem in its sole discretion to be unacceptable.”)

A campaign for Rittenhouse then appeared on Fundly, a rival crowdfunding site. More than $50,000 was raised in a span of hours before that page also disappeared.

On one hand, this is a little troubling. After all, a 17-year-old faces life in prison, and efforts to raise money for his legal representation to ensure he receives due process and a fair hearing are being stymied by crowdfunding companies.

On the other hand, the crowdfunding platforms are in a tricky position. The facts of this case are still emerging and it’s highly charged politically. But even the undisputed facts are controversial: a man with an AR-15-style .223 rifle traveled across state lines to insert himself in the middle of a city animated with protest and violence following a police shooting of an African American man.

Because of this, many in the US media have already branded Rittenhouse a vigilante and domestic terrorist, even as others claim he was there simply to “maintain peace” and help people, as Rittenhouse himself claimed prior to the shooting.

These are not easy waters for companies to navigate. Even people who cherish the liberal values of due process and the right of accused criminals to receive adequate counsel can see the potential pitfalls.

I personally think crowdfunding platforms should permit people to donate to the legal defense of accused criminals regardless of their crimes because it helps ensure the accused will receive effective legal counsel and a fair trial. (Patriot and future president John Adams famously defended British soldiers who participated in the Boston Massacre because he believed the same.)

But it’s easy for me to stand on principle. I don’t have to worry about boycotts, lost sponsors, potential strikes, or any of the other potential problems crowdfunders could be beset by.

And anyone outraged that GoFundMe and Fundly would terminate crowdfunding campaigns started on Rittenhouse’s behalf should ask themselves an important question: Would you also extend the same standard to crowdfunding campaigns for people such as Michael Reinoehl, the Antifa supporter accused of fatally shooting Aaron J. Danielson in Portland?

The Free Market to the Rescue

These are complicated times and difficult questions to answer, but the free market has a knack for solving many of our problems if we let it work.

One of the beauties of the free enterprise system is that, unlike controlled economies, they produce a wide array of options. We talk a lot about monopolies and the idea that certain companies gain exclusive control of a market or service, but such monopolies are rare.

For example, it’s often claimed that Google is a monopoly, but the reality is the company has numerous competitors in the search engine business, including Bing, Yahoo, DuckDuckGo, and others.

The same goes for crowdfunding. GoFundMe and Fundly might be the biggest game in town, but the free market economy has seen to it that they also have ample competition.

“Every man deserves a fair trial,” said one anonymous donor. “This is hard to do when the alleged crime is politicized as this one is.”

These donations, unsurprisingly, have sparked horror in some.

As a Christian I’m horrified to hear that a so called “Christian” site raised $275,000 for accused killer Kyle Rittenhouse.

How can someone call themselves a Christians and support a killer?

So #evangelicals have gone from turning a blind eye to #racism to raising money for a murderer? And if you’re pro-life, why raise money for a killer? https://t.co/ije0yRKY3o

But Rittenhouse’s fate will likely be decided by a jury of his peers, not his legal counsel.

And it’s for that reason I believe crowdfunders should not shy from efforts to raise funds for people accused of crimes such as Kyle Rittenhouse and, yes, Michael Reinoehl. Their lives and freedom are at stake, as are the principles of justice itself. If we believe in justice, we should have nothing to fear from seeing that they are adequately defended in court.

Loading...
"Not by might, nor by power, but by my spirit, saith the Lord of hosts." Zechariah 4:6
BEFORE IT'S NEWS ON TELEGRAM
GET THE TELEGRAM APP - https://telegram.org/ JOIN OUR CHANNEL - https://t.me/BeforeitsNews
Read it..
BEFORE IT'S NEWS
SIGN UP FOR OUR NEWSLETTER
Today's Top Stories
Internet & Phone Lines Being Shutdown Worldwide! Media Not Reporting This! Truth Being Censored! - Must Video
Biden, Harris, Milley Charged with Treason, Tribunals at White House, Mass Arrests, Martial Law
Simon Parkes May Vital Update (Video)
New Michael Jaco Discusses Trump Victory, Military OP, Tribunals and Remote View with Nicholas Veniamin
X22Report: Constitution Will Reveal The Truth! Watch Arizona! Release The Cannon! - Must Video
After the Jab: Watch This Lady Sitting in the Post Vaccine Recovery Area - Pass Out, Fall Off Her Chair and Die??
Deep State Exposure To Crimes Continues To Come Out! - Must Video
Comey Begs Military: “Please Don’t Kill Me!”
Obama Biden Clinton to Face FIRING SQUAD Treasonous Pedos! U.S. CORP Bankruptcy! New Republic! Trump's 2nd & 3rd Terms!
Sabotage! Kamala Walks Out of Meeting With Mexican President on Border Crisis! Wow! - Must Video
Loading...
Featured
America’s Civil War 2.0: It’s Deja Vu All Over Again
Whores keep on whoring
Lawsuits Being Filed Against Forced Vaccinations [VIDEO]
Covid Testing a Financial Windfall for Hospitals & Providers
U.S. authorizes Pfizer vaccine for children ages 12 to 15
Inflation is coming, no matter what they tell you
9 Scary FEMA Camp Facts You Must Know
Military Principles for Homestead Defense and Comms
For the second time, the smoking gun of Chinese bioweapons and Covid is out in public
Yikes! Corn Prices Are Up Roughly 50% In 2021 As Americans Brace For Years Of Horrific Food Inflation
Top Global
Palestinian/Israeli update 5/10/2021 part 4..Israeli settlers celebrate fire at Al Aqsa mosque
For the second time, the smoking gun of Chinese bioweapons and Covid is out in public
Israel Flash Red Alert! Rocket Attacks!
Temple Mount Death Toll Rises To 20 As IDF Retaliates Against Hamas Terrorists After Over 150 Missiles Fired On Israel From The Gaza Strip Border
HR1: Covid-19 A Chinese Bioweapon For World War 3 Confirmed By Army Documents
Two Safehouses Used to Hold and Kill Captives Were Discovered in Irapuato, Guanajuato
What Will Happen to France?
Best & Taylor Emergency Flash Update (5/10/2021): FIRE IN THE MIDDLE EAST! Colonial False Flag? Get Ready for ANYTHING!
Persian Gulf update 5/10/2021..Iran and Saudis talking again.. should US be worried?
France Is Heading for Civil War
Loading...
Top Alternative
Religious Oppression on the March Worldwide
It's Darwin's Turn to Get Canceled
300/UFO fleet near the ISS on live broadcast /Reptilians show them selves /Huge spaceship over New York City ! Grays crafts/ AMAZING ISS : CLEAR FOOTAGE OF 2 MASSIVE UFO VERY CLOSE TO THE STATION.
Juicy Turkey Burgers
Nuremberg Trials - Did Vaccine Include Microchip? - Reiner Fuellmich, Setting up Nuremberg Trials - PCR Set Above 28 Says Nothing, COVID Mutation Nothing to Worry About
The Autism Epidemic: Transhumanism's Dirty Little Secret, Bill & Melinda Gates Ties to Epstein? The Truth About COVID-19 & Vaccines With Wayne McRoy - Must Listen to Now (The Michael Decon Program)
5G/EMF/RF Mother’s Day 2021 Part 3
The Variant And The Vaccine
Nibiru - Dr Sam.. Unedited images of (Nibiru) in the lecture from today
Military Principles for Homestead Defense and Comms