There’s an old joke that runs through hard core libertarian circles that goes something like this.

An overly earnest newbie at a Libertarian Party meeting one night during a lull in a heated discussion of comma placement in a new rule change proposal asks, “What’s the difference between an anarchist and a minarchist?”

The grizzled party chair looks up from his copy of Rothbard’s The Ethics of Liberty and replies, “About two years.”

And I can tell you that that joke, like all good jokes has a nugget of deep truth in it. Embracing Minarchism is the toe-dip into the Non-Aggression Principle (NAP). It’s your first tentative step into the scarier world of imagining it without a state.

And it’s a position that’s comforting. But it is also rife with contradictions. Those contradictions weigh on a person who is trying to live up to the ideal of the NAP.

If you are truly on an honest journey to find the right path for your own personal behavior, then rigorously applying the NAP to all facets of your life leads you to shedding the precepts of the necessity of the coercive state to shape and hold society together.

Anarchy in the You ‘Kay?

Because you begin to see the break points, the fault lines of our society in NAP terms. For me, I quickly no longer gave credence to the idea that in order for my individual rights to express themselves I have to submit to a human authority with a granted monopoly power on the use of aggressive force, which the NAP itself stands in opposition to.

At the core of all collectivist thinking is this basic tautology that your rights stem from the negotiation of what others define them as. Only by submitting to a higher human authority over you can you have a hope of retaining any of them, so you need to negotiate them down from the ideal.

Sound complicated? That’s because it is and it’s also insane.

Once you come to that conclusion and are willing to apply it consistently then you can become comfortable with freeing your mind of the need for the state.

But it also comes with responsibility. How do you defend those rights? Will you defend every assault on them no matter how minor?

But here’s better questions, ones Marxist will always throw at you to trip you up…

If you don’t defend yourself against a minor theft, say a pen or a coffee mug, was your right to property taken from you? Do you still have it in practical terms if you can’t defend against a murderer?

The answers are, in order, No and Yes. Just because the property was taken or the threat made, you always reserve the right to express the right to defend it.

That you choose not to is… wait for it…

That leads to basic economic questions like: Should you always do so? When is forgiveness or acceptance better than retribution?

Is it worth my precious time to chase down a guy who sold me a fake watch rather than chalk it up to experience and go about my other business?

These are basic questions that form the filter on which to view the world around you and are the basic seeds of the growth from being mired in the inconsistencies of Minarchism and blossoming into the flower of Anarchism.

It leads you to conclusions about how to find ways to minimize, not eliminate, coercive forces on your life. That we live in a world circumscribed by tyrants constantly climbing over each other for the power to tyrannize is irrelevant. They may in real terms suppress the expression of your right to life but it most certainly doesn’t negate it.

You can always choose to say, “No.”

Notice to this point I haven’t spent one word talking about implementation or politics. Because implementing these ideas isn’t a system to be imposed. That, itself, is a violation of the NAP, the idea of imposing Anarchy is a Collectivist perversion of the process.

We’re seeing this in the hyper-violent rioting of Antifa and BLM wanting to impose their new system that they call anarchy at the point of a gun and an open-ended wrench. 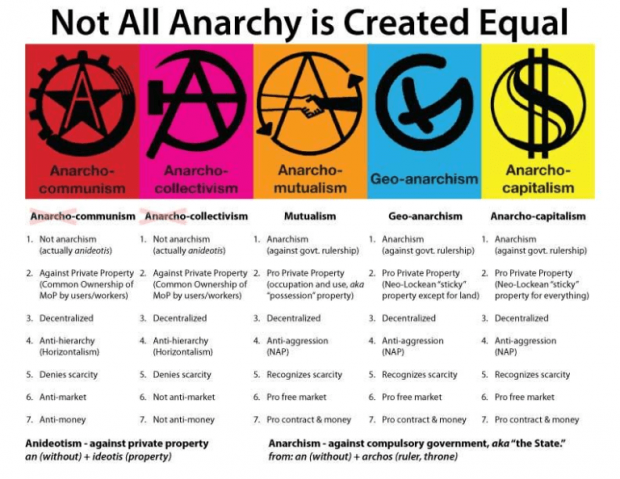 Anarcho-Capitalism isn’t a political system, it is a behavioral model and a filter with which to view the world. It is a philosophy whose name implies an internal vision of the world we want rather than the world we have.

And that filter is an incredibly powerful tool to analyze the world — especially economics and politics as both lie at the intersection of behavioral dissonances within a given population.

(I talked with Jay Fratt, The Conservative Hippie, about Anarchism on his podcast over the weekend.)

It is also a personal goal most people share — the best versions of ourselves possible. Where the differences lie along the political landscape is the extent to which taking on the responsibility of fixing problems which are not ours leads to violence, i.e. the State and before that revolution.

And that leads to the next two-year process, the one of realizing that there is no Utopia where sin is expunged, theft conquered and sociopathy eliminated.

There is only the minimization of these things because people are capable of tremendous generosity and tremendous violence. All of us. At all times.

And the real struggle is coming to terms with that fear. Fear drives Communists to overreach and hubris. AnCaps are driven by the acceptance of their limitations.

Only a culture which reinforces this idea of personal responsibility for one’s actions rather than glorifying thieves as winners will put us back on the right path rather than the wrong one.

Given where we are right now, that’s going to take a heckuva lot more than two years.

The post About Two Years … appeared first on LewRockwell.

Loading...
"Not by might, nor by power, but by my spirit, saith the Lord of hosts." Zechariah 4:6
BEFORE IT'S NEWS ON TELEGRAM
GET THE TELEGRAM APP - https://telegram.org/ JOIN OUR CHANNEL - https://t.me/BeforeitsNews
Read it..
BEFORE IT'S NEWS
SIGN UP FOR OUR NEWSLETTER
Today's Top Stories
Former FEMA Operative Celeste Solum Talks With David Icke - Breaking News: ‘The Covid Tests Are Magnetically Tagging You' — 2025 Is the Year — 11/20/2020
X22Report: Extreme Panic in [DC], We Are at a Crossroads in the History of Our Civilization! - Must Video
Banned Viral Video! Military Insider Interview: Special Ops Revealed [DS] Hidden Secrets - How Is This Still a Secret?! Both Parts, Must Watch!
This Is The Key To Bringing It All Down! - SGT Report Must Video
Robert David Steele on Indictments Media Take-Down Supreme Court Ready Worst Case House Elects Trump by 26/27
The Greatest Fraud Ever Perpetrated Against Humanity ‘The Covid Hoax’! Yesterday The Entire British CABINET Were Put Under HOUSE ARREST For Criminal Fraud! Genocide & Treason Against the People!
Robert David Steele: Sidney Powell Fired by Rudy Giulini with Jenna Ellis! Chris Chistie a Traitor President Out of Touch! - Must Video
Trump Genius!!! China Set Biden's Up!! Russia Set Up Clinton's!! Election Was Final Trap!! Arrests Will Be Justice!! (Must Video)
Sidney Powell Keeps Fighting! If What She's Saying Is True, Things Are About To Get Crazy! - Must Video
Something New Uncovered About Joe Biden Virtually No One Knows About! via FL Maquis
Loading...
Featured
The CIA Orchestrated All Of This! - Must Video
Treason: GA Gov. Kemp & CA Gov. Newsom Bought Off By Communist China in Covid Supplies Kickback & Money Laundering Schemes – Source! - Mike Adams
Deborah Tavares: Sociology Student Gang Stalked 4 Truth, Says A I Was Behind It
Sarah Westall: Funny Business Regarding Election Proven on Video
Robert David Steele: Sidney Powell - Lin Wood - Satanic Ritual Abuse Pedophilia Adrenochrome Child Torture UK
Not So Fast! Trump’s Mega Midnight Reversal And Tucker’s 180 Blow Open Shocking Plot Twist To Election 2020!
Consequences of the unreal & unnatural pc/neoliberal ‘New Normal’
David Horowitz: Call to arms
ZetaTalk Newsletter as of November 29, 2020
Say Goodbye To International Travel - TheCrowhouse
Loading...
Top Global
COVID 19: not so much a pandemic as a Trojan Horse
Say Goodbye To International Travel - TheCrowhouse
Intel Inside Sources Say President Trump Will Remain in Office via Israeli News Live
Strange Creature Scared These Kids in England. What is it?
Pfizer Claims Vaccine Is 90% Effective. Del Bigtree Has Found Some Shocking Information In The Fine Print. UK Expects ‘High Volume’ Of Covid Vaccine Adverse Reactions Death Wave! Great Videos!
Proof Covid Was Planned Years Ago !! Covid-19 To Be Diagnosed Using A.I. (Artificial Intelligence) According To 2015 Patent Application. Great Video!!
The Communist Manifesto Decoded. Great Video!!
Inflation and the French Revolution: The Story of a Monetary Catastrophe
Palestinian/Israeli update 11/23/2020..Israeli PM Refuses to Comment on Reported Saudi Arabia Visit
The New World Order Communism by the Backdoor – Great Documentary Video!
Loading...
Top Alternative
The Mark Of The Beast 666. The Transhuman H+ Agenda By Injection! The Covid-19 Vaccine Is The DNA Changing Gene Altering “Soul Catching” Mark Of The Beast! Fabulous Video Featuring Dr. Carrie Madej.
COVID 19: not so much a pandemic as a Trojan Horse
The Protocols Of The Learned Elders Of Zion Decoded! Excellent Video To Understand The Step By Step Plan For the New World Order!
Trump Has Not Conceded - HE HAS NOT YET BEGUN TO FIGHT!
Sidney Powell Releases Another Statement
Hepatitis B Vaccine at Birth
Deep-state spooks trying to turn law enforcement against patriots flocking to Parler, MeWe, Gab
Mothman Incident In Point Pleasant West Virginia
Strange Creature Scared These Kids in England. What is it?
The Communist Manifesto Decoded. Great Video!!