Click here to let the Governor and your legislators know you oppose public funding of a new stadium!

“More than 20 years of academic research has failed to find a significant relationship between an investment in a sports stadium and significant job or income growth.” http://bit.ly/1GgHFEc

‪Wall Street Journal rains on parade of those wanting to prostitute taxpayers to build another stadium — they don’t help a region’s economics!

A 2007 study in the Journal of Sports Economics examined cities that gained professional teams. It found adding a team did “not have a positive economic impact on the local community” and didn’t raise regional incomes.

We must keep the NFL in town at all costs. It will destroy the economy if the Rams leave. MYTH

The thought that not building a new publicly funded stadium will result in a tremendous economic impact is understandable but false.  As Glenn MacDonald, economist at the Olin Business School at Washington University reports in the article Losing Rams would be blow to St. Louis’ pride, not economy, the economic impact from the Rams is nominal.

Rams games are different (than Cardinal and Blues games). The fan base is mostly local — unlike the Packers, Cowboys or Steelers, the Rams have little following outside of the area (except for die-hard fans who remain in California) — so they don’t stay at hotels and aren’t much into tailgating.

Negotiators gave away the bank when they “lured” the Rams to town. The Rams got nearly if not everything they wanted and the economic impact was limited for everyone – city, county and state. We see the scurrying and willingness to do what ever it takes to keep the Rams reappearing in the latest deal. It’s captured well in Acting like beggars for a football stadium.

The study of data from stadium deals all across the country show things have not changed over the years and much to the chagrin of public funded stadium proponents it shows that the public is taken for a ride on these deals. Here are several links to studies and articles about them.

Should Cities Pay for Sports Facilities?

How the NFL Fleeces Taxpayers

Football: A Waste of Taxpayers’ Money

America has a Stadium Problem

The majority of players, staff and coaches are non-residents of Missouri. RSMo 143.183.1 places all such income taxes The from these non-residents in an earmarked fund. These funds go to arts and entertainment purposes and a small portion toward the Department of Natural Resources (DNR). If the Rams were to leave this fund would collect somewhere between $7.8-9.2 million or so less than it does today. It would still receive money from the all non-resident baseball players, hockey players, concert and acting artists, staff and coaches.

In 2014, Michelle Gleba, director of communications for the Missouri Department of Revenue says, the state “received approximately $18.4 million from all NFL players for duty days in Missouri.” If you figure that the Chiefs and Rams split that total about evenly, then the Rams (and their visitors) accounted for about $9.2 million in income tax, which is pretty close to the $10 million that Nixon claimed. None goes toward paying the debt or maintenance on the dome or any other essential state service.

Here is what the Department of Revenue (DOR) reports was collected by the Athlete’s & Entertainer’s tax for the last completed Fiscal Years (FY). As mentioned above, they do not know who actually reports what income by name so they divide the football total in half and attribute 50% to the Rams and 50% to the Chiefs.

Here’s what the last 10 fiscal years look like. It should be noted that attributing 50% of this total to the Rams in 2003 and 2010 is inaccurate. The Chiefs hosted a playoff game each of those years which means they contributed more to the Athlete’s and Entertainer’s tax those years than the Rams. 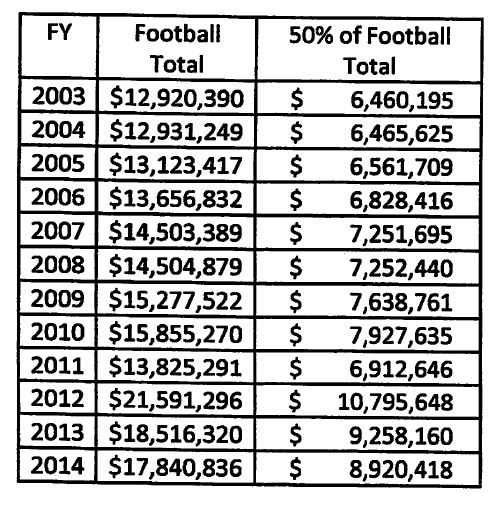 Also as pointed out above, NONE of these funds go to pay any state “bills”. They go to the funds designated in RSMo 143.183.1. Not schools. Not Roads. Not to pay the bonds or maintenance on the EJD or the new stadium. If the funds generated by the Rams goes away because the Rams move, the state would have no less money to pay its bills than it would if they stay.

You can read how the non-resident tax issue is played all around the country by clicking here.

With or without the Rams the Edward Jones Dome is going broke.  Building a new publicly funded stadium will only exacerbate the problem.

The naming right are enough to cover bond payment. MYTH

Downtown St Louis needs to be “cleaned up” and revitalized. Public funding of stadium will do that. Half-Truth

It is true that the area where the proposed stadium would be located is not what it used to be. However, there has been a lot of activity in that area of late that is bringing it back and is also funded by tax credits. In fact, several of the buildings that would be torn down are historical buildings and buildings that have been recently renovated.

The new stadium proposal would result in those buildings that received millions of dollar of tax credits to be renovated to be torn down using other tax credits to do so. Example of government inefficiency at its worst.

And it’s not the first time we have heard such promises. The Show-Me Institute captures that well in this video:

Stan is getting public funds to build stadium in LA (Inglewood). MYTH/Half-truth

Stan has proposed building his new nearly $2 billion stadium in Inglewood with NO upfront public funding.

a. No upfront money from government. Inglewood isn’t putting a dime into the stadium for it to be built

b. Inglewood is anticipated to receive $50-60 million of infrastructure improvements that they will not have to pay for until c.  happens.

c. Stan is going to pay for sidewalks and road work, landscaping, water mains and utility lines that the city would otherwise be paying for upfront. Inglewood will reimburse Stan for these public improvements but ONLY after the stadium has generated $25m/yr. If the stadium only generates Inglewood $24,999,999 there will be no reimbursement that year to Stan.

d. Once c. happens, the $25m/yr, Inglewood will reimburse Stan up to $8 million a year for costs on event days for police, emergency medical crews and shuttle bus services from off-site parking. They estimate that could tally $8 million annually, or $40 million for a five-year period.

After Inglewood has paid back the public improvements made on their behalf with Stan’s upfront money, they will clear $17m/yr after paying for the event day costs above. In the first 5 years of $25m/yr from the stadium Inglewood will reimburse Stan about $100m and will have “cleared” $25M.

“The total cost of the renovation is $400 million. Of that amount, the Chiefs are funding $125 million, Jackson County is funding $212,500,000, and state tax credits provide $62,500,000. The Chiefs are responsible for any cost overruns in the stadium improvements.
In addition to contributing to basic improvements to the County-owned stadium, the Chiefs are paying for new and remodeled suites, upgraded office and administrative spaces, and an all-new K.C. Football Museum, which will be open in time for the 2010 season opener. “

No new taxes. The new stadium will be built with existing taxes and just extending the bonds.  Half-truth.

Supporters of the new stadium claim that state taxpayers should not have any concerns about building it because it won’t require a tax increase. They are very specific in the language they use because they know they cannot say it won’t cost taxpayers more money because it will.

In 2013, the state still owed about $63m on it portion of the bonds that built the EJD. Under the new scheme, the remaining balance which is due to be paid off in 2021  would be “refinanced”, “extended” or in other words rolled in to the debt for the new stadium projected to be between $300-350m. A rule of thumb is 2x for principal plus interest so taxpayers will be saddled with and additional debt and end up paying at least $700m more than they are scheduled to pay now.

No new taxes? Might sound good but the fact is that state taxpayers will have a much larger burden than they do now and pay much more for a new stadium. No new taxes may be technically accurate but is most definitely deceptive.

We already know that 70% of St. Louis region likely voters do not approve of publicly funding a new stadium.  When a slightly more friendly question was asked the St. Louis area rejected publicly funding the stadium by 63% and statewide rejected it with a 70% outcome.

There is no doubt that the fans who want to keep the Rams here are very passionate about it. Having a new stadium in St Louis would be great! Having it built at state taxpayers’ expense would be a boondoggle and would continue the vicious cycle of taxpayers underwriting billionaire owners and the NFL.