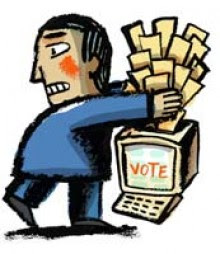 Paul Gottfried at American Greatness traces the history of liberal progress through our bureaucratic and cultural institutions.  He goes back decades.  And he has a plan for conservatives who are reeling from the stolen election and the “mock inauguration” two days ago.  He starts off:

The conservative Catholic columnist John Zmirak ends his inauguration day column for The Stream with this expression of profound disgust:

So by all means enjoy the mock-inauguration of a corrupt, senile hack as the fruit of ballot-box stuffing and fake COVID panic. But remember that now we all live in a tinpot Bananas Republic. And a disciplined, fanatically nationalist, resurgent Red China is smiling. The virus it shipped worldwide succeeded beyond its leaders’ wildest expectations.

I quote Zmirak’s peroration because of the openness of his loathing for the administration that began its reign on Wednesday. Pat Buchanan, Roger Simon, Newt Gingrich, Roger Kimball, and Michael Walsh have all recently produced informative and eloquent columns underscoring the lies, deceit, and intimidation that they associate with the woke Left. These columnists have also documented the extent of leftist control and underlined the need to resist their odious domination.

Although there are lots of properly indignant Americans on our side, we should not exaggerate the value of our hand. The best course for us to pursue given our relative weakness would be to try to isolate our opposition. Do nothing to cooperate and concede no ground. There should be no plan for “bipartisanship” or for reaching out. I can’t see the benefit of either, and as I watched Matt Continetti, Geraldo Rivera, and then Mitch McConnell (R-Ky.) going after Trump for “inciting a riot” during his last weeks in office, I was struck by the futility of this groveling to the Left.

Conservatives in Congress should treat the Biden-Harris Administration exactly the way the Democrats treated Trump’s presidency, by totally dissociating themselves from any of its actions. This resistance could have started (and for many did) by ignoring the “mock inauguration” that John Zmirak so pungently described.

And, oh yes, avoid the word “president” in designating the implausible new occupant of the White House.

Bonus link:  Katie Hopkins was in DC for the “inauguration.”  Her report is here.