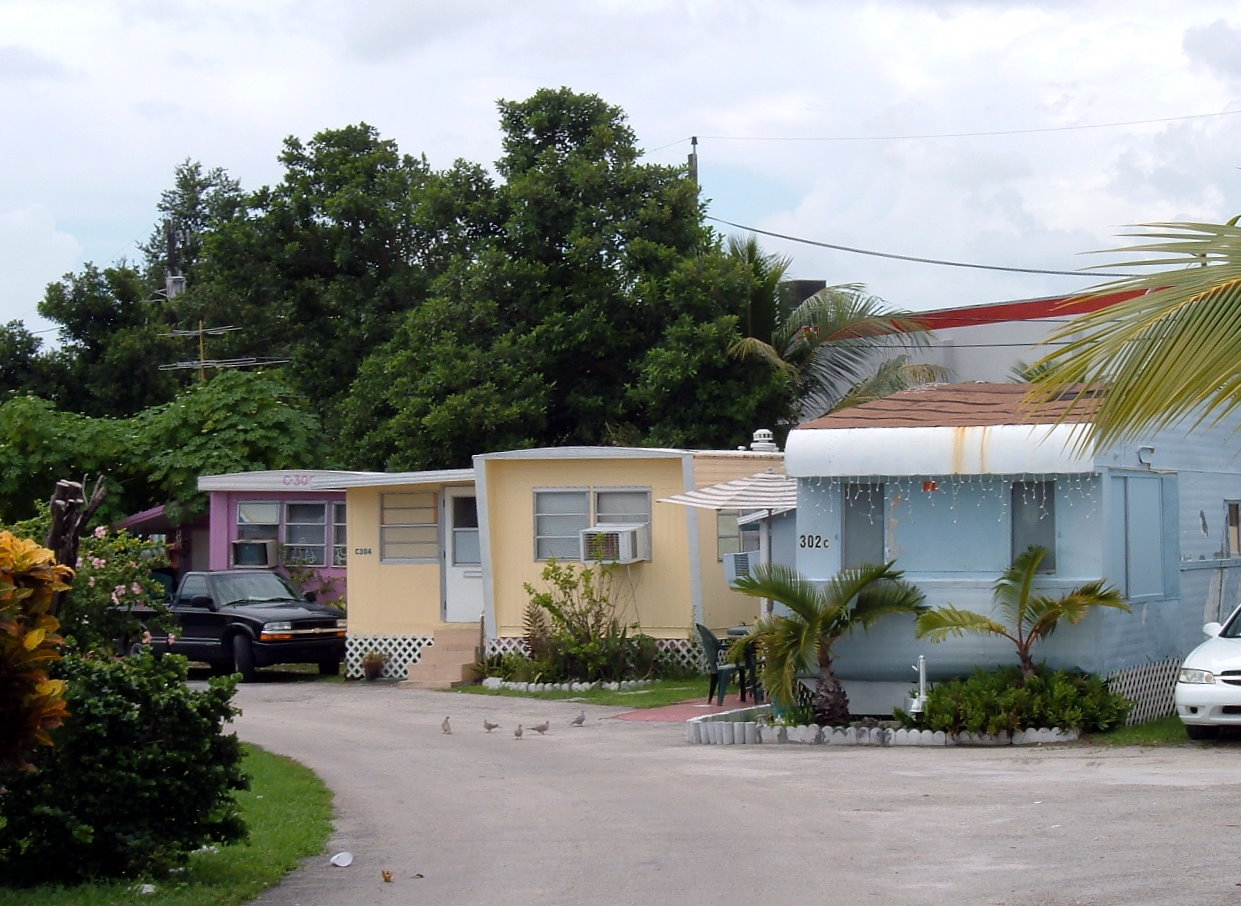 Given that “redneck” and “hillbilly” remain the last acceptable stereotypes among polite society, it isn’t surprising that the stereotypical urban home of poor, recently rural whites remains an object of scorn. The mere mention of a trailer park conjures images of criminals in wifebeaters, moldy mattresses thrown awry, and Confederate flags.

As with most social phenomena, there is a much more interesting reality behind this crass cliché. Trailer parks remain one of the last forms of housing in US cities provided by the market explicitly for low-income residents. Better still, they offer a working example of traditional urban design elements and private governance.

Any discussion of trailer parks should start with the fact that most forms of low-income housing have been criminalized in nearly every major US city. Beginning in the 1920s, urban policymakers and planners started banning what they deemed as low-quality housing, including boarding houses, residential hotels, and low-quality apartments.

Meanwhile, on the outer edges of many cities, urban policymakers undertook a policy of “mass eviction and demolition” of low-quality housing. Policymakers established bans on suburban shantytowns and self-built housing.

In knocking out the bottom rung of urbanization, this ended the natural “filtering up” of cities as they expanded outward, replaced as we now know by static subdivisions of middle-class, single-family houses. The Housing Act of 1937 formalized this war on “slums” at the federal level and by the 1960s much of the emergent low-income urbanism in and around many U.S. cities was eliminated.

With prosperous cities increasingly turning into playgrounds of the rich due to onerous housing supply restrictions, we shouldn’t take these startlingly affordable rents lightly.

In light of the United States’ century-long war on low-income housing, it’s something of a miracle that trailer parks survive. With an aftermarket trailer, trailer payments and park rent combined average around the remarkably low rents of $300 to $500. Even the typical new manufactured home, with combined trailer payments and park rent, costs around $700 to $1,000 a month. Both options offer a decent standard of living at far less than rents for apartments of comparable size in many cities.

The savings don’t come out of shoddy construction either: manufactured homes are increasingly energy efficient, and their manufacturing process produces less waste than traditional site-built construction. With prosperous cities increasingly turning into playgrounds of the rich due to onerous housing supply restrictions, we shouldn’t take these startlingly affordable rents lightly.

Trailer parks are not only cheap due to manufacturing; they’re also cheap thanks to their surprising exemption from most conventional land-use controls. Most cities zone very little space for trailer parks—presumably a reflection of the general bias against low-income housing. But where they exist, they are often subject to uniquely liberal land-use regulation, with minimal setbacks, fewer parking requirements, and tiny minimum lot sizes. The result is that many trailer parks have relatively high population densities.

If you had 70% home plots/15% roads/15% shared amenities like parks and squares, 1000sf plots, and 2.5 people per household, that works out to population density of 46,000 people per square mile — with one or two story construction! At this level of density, compared to about 9,000/mile for the denser Los Angeles suburb, you could easily have a lot of neat commercial stuff (bars, restaurants, shops, schools, etc.) within walking distance.

How could this be? The answer lies in the exchange at the heart of a trailer park: a trailer owner pays rent not only for a slice of land in an apparently desirable location but also for a kind of club good known as “private governance.” Edward Stringham describes the concept as “the various forms of private enforcement, self-governance, or self-regulation among private groups or individuals that fill a void that government enforcement cannot.”

The park management provides order within the park, upholding certain basic standards on cleanliness and maintenance while also dealing with unwanted visitors and settling disputes among neighbors.

Although costly to move, the mobile nature of the homes allows residents to shop around for governance amenities, punishing incompetent park managers by leaving and rewarding competent park managers by moving in. Residents can shop around for other lifestyle preferences, including parks restricted to retirees or parks managed to be family friendly.

we should extend the liberal land-use regulations common in trailer parks to site-built homes and apartments. Besides needlessly restricting the housing supply, conventional land-use restrictions undermine the traditional urban development.

While many see the purported incompetence of low-income families as a justification for paternalistic policies—including the above mentioned bans on low-quality housing­—the success of private governance in trailer parks speaks to the potential of emergent social orders to address shared ills.

The lesson here is not, of course, that we should all go live in trailer parks. As a Kentuckian, I have spent enough time in and around trailers to think better of that idea. But here are three key lessons:

First, urban policymakers and planners must take a more permissive approach to low-quality, affordable housing options like trailer parks. Many cities tightly restrict the location and size of trailer parks, effectively limiting the choices of low-income families and undermining access to affordable housing.

Finally, we should respect the complex orders that organize urban life, orders often visible only to members of the community. Where policymakers deem top-down regulation necessary, it should be designed to support rather than replace emergent orders that low-income communities have developed over time.

When we stop treating low-income communities as objects of scorn, to be subjected to top-down, paternalistic planning, we might find that we have a lot to learn from them.

This article has been reprinted with permission from Market Urbanism.

Loading...
"Not by might, nor by power, but by my spirit, saith the Lord of hosts." Zechariah 4:6
BEFORE IT'S NEWS ON TELEGRAM
GET THE TELEGRAM APP - https://telegram.org/ JOIN OUR CHANNEL - https://t.me/BeforeitsNews
Read it..
BEFORE IT'S NEWS
SIGN UP FOR OUR NEWSLETTER
Today's Top Stories
Taking out the Trash: Dr. Steve Pieczenik on Coming Events 2020-01-13
Situation Update, Jan 14th, 2021 - The FEMA, Military Coup to Save America, Not Destroy It - Mike Adams Must Video
Inauguration Cancelled, Trump Remains in Office, ABC, NBC, CBS, Fox, CNN, MSNBC to Loose Licenses
X22Report: Checkmate, [Zero Day] Approaches, Sometimes a Good Movie Can Reveal a Lot of Truth! - Must Video
National Alert! US Space Force Command Has Now Announced Something Completely Unbelievable
Scott McKay Jan 2021 News Update
Navy Seal Michael Jaco Talks to Juan O Savin! What! Biden Will Be Sworn in at Supreme Court! But Wait, the Ending Is a Real Blast - Must Video
"I've Seen the Laptop, it Was a Direct Attack on Our Election"! - Lt Gen Thomas Mclnerney Need to Watch Full Video
FBI Puts Nation on High Alert! Targets a “Q” Wired... but What Happens Next, No One Saw Coming!
Chief Justice Robert's alleged outburst, with C-SPAN video!
Loading...
Featured
Mike Adams: US Military & FEMA Will Save America at its Final Hour! +Video
The Left’s Conditioning of Americans Is Complete
No One Is Listening: A Country Divided Against Itself
To My Brothers and Sisters In The Military
The Mount1 BeforeItsNews Report - The Truth Is Hard to Come By
President Trump to Take Massive Action; Pardons, Declassifying and Special Counsels Allegedly Incoming
ZetaTalk Newsletter as of January 24, 2021
Current US Congress Warrants Total Dissolution for Provoking Civil War
Domestic Terrorists: We Are Being Divided By Design, And Easily Manipulated
Grab your gun right now.
Loading...
Top Global
Strange Events in D.C. Many Searching for Truth! Pray!
Does the Measles Virus Exist? This Will Make Your Hair Curl
Greece’s Renewed Relations With Russia Will Be Tested by Biden
The Destructive Hypocrisy of the Political Left Is What Caused the Capitol Protest
US Israeli Strike on Iran in Syria via Israeli Live News
Top 7 Reasons Why People Are Testing Positive for Covid-19 After Vaccinations
A Concise View Of The Coming Dystopian World Order
Q Psyop Exposed & Those Who Push the Narrative (Cutting Edge with John Hall & Dan Bidondi
Saudi-Led Embargoes Against Qatar Failed
China and EU Sign Agreement That Further Isolates US
Loading...
Top Alternative
Your Group Sets Off a Bomb in the Senate Building, and Bill Clinton Pardons You: The Astounding Susan Rosenberg Case, and the Logic of the Left
Politics Won't Fix the American Decline
The Attack on the Capitol Was Coordinated & Planned By Traitors 1/4/2021 6:41 AM PDT - Must Video
Trumpet News - Breaking News INTEL Updates for 01-13-21
The Mobbing of a Portland Bookstore Reminds Us Why Fahrenheit 451 Was Written
Did Nostradamus Predict Everything Currently Happening In 2021?? - Dollar_Vigilante
OVERKILL! 2nd Trump late stage impeachment reveals dems skewed priorities
Trump Prevented From Joining Parler, Gab by Jared Kushner
Surreal 'Dome Fountain' of Lava Bubbles up in Hawaii Volcano - Unusual, Stunning - There Is No Denying the Veracity and Warnings
Book of Enoch: Judgment of the Sinners and the New Heaven - New Earth