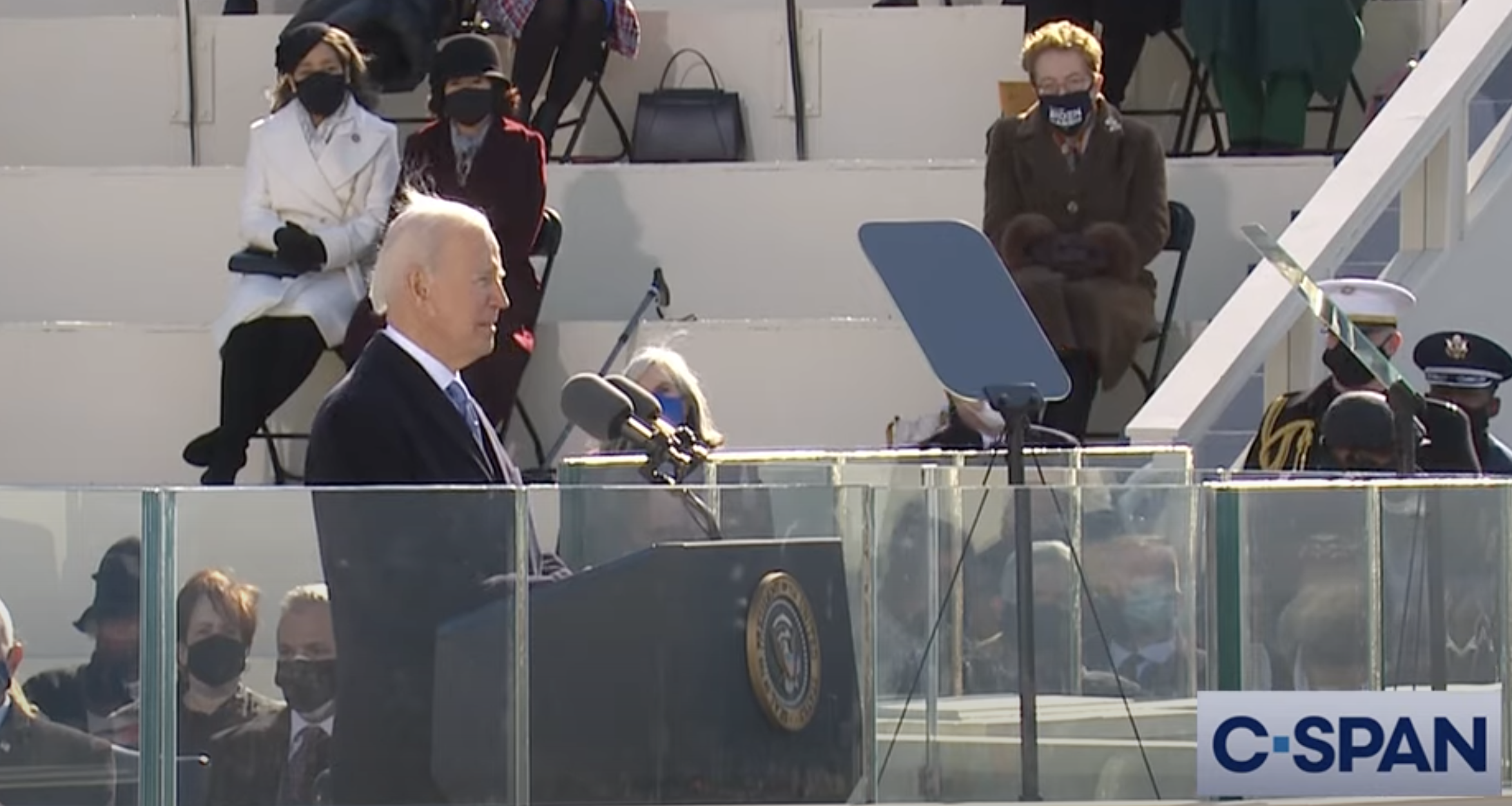 Biden also announced 17 “Day 1” executive actions (the most of any modern president) addressing four of those six crises. Throughout January, more actions will be announced according to a calendar of “themed days.”

On the virus, one executive order, the Times reports, created and filled the new role of “Covid-19 response coordinator.” This new “COVID Czar,” “will report to the president, in an effort to ‘aggressively’ gear up the nation’s response to the pandemic.” The order also reversed Trump’s disbanding of a national security agency charged with “global health security and biodefense” under the National Security Council.

And Biden reversed the Trump administration’s break with the World Health Organization, tapping Dr. Anthony Fauci to head the US delegation to the WHO.

On climate change, Biden signed two executive orders: one recommitting the US to the Paris climate agreement and another reinstating many environmental regulations canceled by Trump. Biden also called off construction of the Keystone XL pipeline.

“The president,” the Times reports, “designated Susan E. Rice, who is the head of his Domestic Policy Council, as the leader of a ‘robust, interagency’ effort requiring all federal agencies to make ‘rooting out systemic racism’ central to their work.”

On America’s global standing, the Biden administration’s “theme calendar” marked out the month of February for executive actions pertaining to “Restoring America’s Place in the World.”

On truth and democracy, the president’s concrete policy agenda is less clear. But, a major theme of Biden’s inaugural address was combatting “lies told for power and for profit” and “the culture in which facts themselves are manipulated, and even manufactured.”

In his discussion of the “cascading crises of our era,” Biden highlighted some truly urgent problems facing America. Unfortunately, Biden’s solutions, as indicated by his executive actions, are all based on the expansion and centralization of government power, as if that is the only way human society can address such problems.

This casts a worrying shadow on the themes of “unity” and “acting together” that permeated Biden’s inaugural address. Judging from his policy agenda, Biden seems, like his former congressional colleague Barney Frank, to equate “the things we choose to do together” with “government.” And while Biden’s lofty calls for unity at times seemed to refer to civility and social harmony, his actual policies seem to interpret unity not as harmony, but as unison: the kind of monotonous policy lockstep that can only be enforced by centralizing power.

For example, pandemic policies have until now mostly been set at the state and local levels, although authorities have taken major cues from the federal government, especially the White House Coronavirus Task Force. Apparently, that’s not enough unity, so now the national response is to be somehow centrally “coordinated” by a new high-level bureaucrat: the “Covid-19 response coordinator.”

And with the restoration of the NSC’s “directorate for global health security and biodefense,” pandemic response is to be treated even more as a matter of “national security,” which is the standard excuse for secretive and arbitrary federal power.

But national unity is not enough, according to Biden’s policy agenda.

“It’s an interconnected world,” says Apoorva Mandavilli of the New York Times, referring approvingly to Biden’s reintegration of the US with the World Health Organization. To combat the virus, “we have to coordinate with other countries.”

By that, she means “other countries’ governments,” of course.

Intergovernmental coordination is also what rejoining the Paris climate accord is all about. And Biden’s other climate “solutions”—restoring federal environmental regulations and unilaterally shutting down the mostly-private Keystone XL pipeline—are all based on centralized force.

The same is true of the administration’s policies on inequality (temporary bans on evictions and student-loan collections).

For the new administration (as with the old), the answer to every social question seems to be ever more centralized power. How will that play out in future executive actions around the remaining three “cascading crises”?

Will the answer to racism be more federal largesse and more regulations on employers? Will “the attack on truth and democracy” be countered with more censorship, surveillance, and other police-state measures? Will “restoring America’s global standing” mean standing on the necks of more foreigners through a more interventionist foreign policy?

In the meantime, the American people should realize that this entire policy approach is based on a fallacious worldview.

Government is not the only way we “act together.” Coordination need not be centralized. Social harmony does not require compulsory unity. And social crises do not necessitate the expansion and centralization of power.

As the Nobel-winning economist, F.A. Hayek explained in his classic paper “The Use of Knowledge in Society,” the more planning is centralized, the more it becomes ill-informed, uncoordinated, ineffectual, and destructive.

Complex social problems require levels of coordination and harmony that only the “spontaneous order” of a free society can accomplish.

And the more complex the problem, the more decentralized and collaborative the solution needs to be. Thus, our “cascading crises” call, not for more centralized power, but less.

This is especially urgent for Americans to realize, because, as Robert Higgs detailed in his book Crisis and Leviathan, governments regularly seize on crises as excuses to ratchet up government power at the expense of freedom. The bigger the crisis, the greater the engorgement of big government.

With that in mind, President Biden’s inaugural meditation on the “cascading crises of our era” sounds less like a leader “feeling our pain” and more like Leviathan licking its chops.