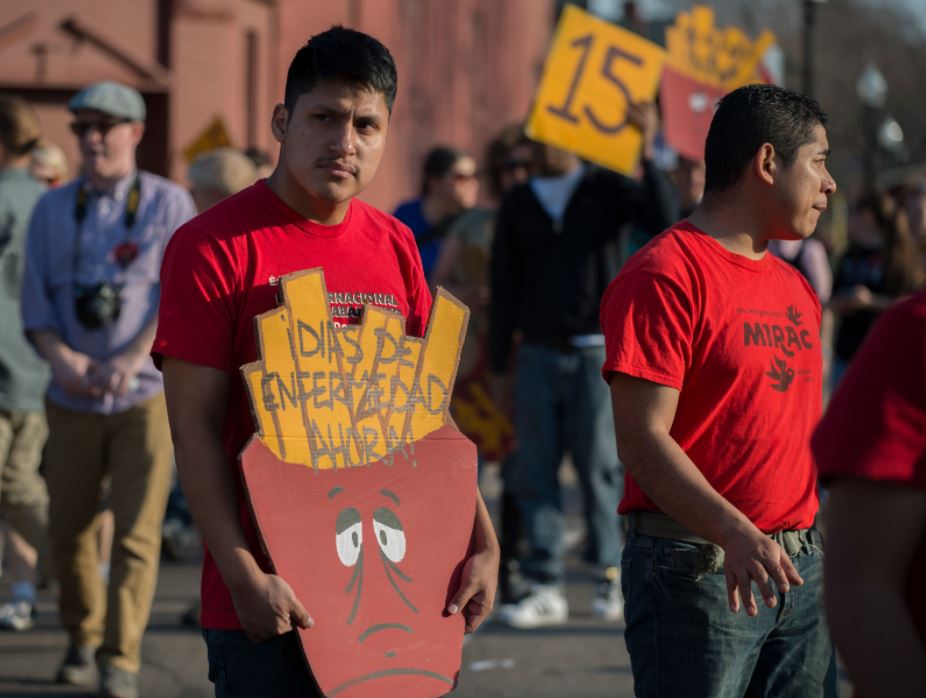 Bloomberg News recently ran a profile of Arin Dube, a Professor of Economics at the University of Massachusetts, Amherst.

The story is a powerful one. It explores how Dube went from a 16-year-old burger flipper earning $3.85 at a McDonald’s in Seattle to a leading authority on the minimum wage.

With federal legislation proposed to increase the national minimum wage to $15 per hour, it’s no surprise that Dube was asked about the proposal in his interview, specifically whether it would destroy jobs or cause businesses to close their doors.

“My reading of the evidence is that those risks are probably not very high,” he says. “There’s also a lot of rewards—lowering poverty.”

Dube is entitled to his opinion, of course, and overall the profile is rather good. But what the Bloomberg article does next warrants scrutiny (and reproach).

Bloomberg economics editor Peter Coy, the author of the profile, states that historically economists tended to agree that minimum wage laws increased unemployment. But he adds that the consensus among economists has shifted in recent years.

“In 1978, 90% of respondents to a survey of members of the American Economic Association (AEA) agreed that minimum wages substantially reduce employment among low-wage workers. By 2015, only 26% of top economists surveyed by the University of Chicago Booth School of Business’s Initiative on Global Markets concurred that raising the floor to $15 by 2020 would “substantially” lower employment. (An IGM survey released on Feb. 2 found 45% nevertheless agreed that a $15 minimum “would lower employment for low-wage workers in many states.”)

Anyone who read this paragraph would likely presume that economists now agree with Dube that the risks of increasing the minimum wage are low. But if you look at the actual IGM survey Coy cites, this is not the case.

In the survey, economists were asked to respond to the following question: “A federal minimum wage of $15 per hour would lower employment for low-wage workers in many states.”

Coy isn’t wrong that 45 percent of economists agreed with the statement. What he doesn’t mention is that just 14 percent of respondents disagreed. The poll shows a substantial percentage of economists responded that they were not sure (33 percent ) or failed to respond at all (7 percent).

Basic economic theory tells us that increasing the price of labor reduces the quantity of labor demanded; this results in less employment.

What this means is that of the economists who responded unequivocally on the matter, an overwhelming percentage of them (76 percent) agreed increasing the federal minimum wage to $15 an hour would have adverse effects on employment.

Of economists who responded unequivocally, there was overwhelming agreement (+3-1) that a $15 min wage would reduce employment. pic.twitter.com/She3tHRi13

That this important context was omitted from the article is both unfortunate and egregious; it distorts the reality of the survey and is sloppy journalism. But of course, the realities of minimum wage laws have nothing to do with how economists respond to surveys. Economic laws are not subject to change, even though humans (and political climates) are.

And recent events, common sense, and basic economic theory tell us there would be adverse effects in employment.

Days ago a pair of Kroger-owned grocery chains announced they were closing 25 percent of their stores in Long Beach, California, after local lawmakers passed a “Hero Pay” ordinance mandating certain companies pay an extra $4 per hour to workers (on top of the $14 minimum wage). The company specifically cited the pay floor as the reason they were closing.

The body of evidence and its conclusions point strongly toward negative effects of minimum wages on employment of less-skilled workers.

Finally, basic economic theory tells us that increasing the price of labor reduces the quantity of labor demanded; this results in less employment. It’s Econ 101, as even Paul Krugman once observed.

Sure, you can find ubiquitous studies to support or deny what basic economics teaches. There are also caveats. Some wage floors may have no impact at all (if it’s below the market price of labor, for example); while others can have severe impact.

But as a recent National Bureau of Economic Research paper shows, a “clear preponderance” of academic research shows the job-killing impact of minimum wage laws.

“[The] body of evidence and its conclusions point strongly toward negative effects of minimum wages on employment of less-skilled workers, especially for the types of studies that would be expected to reveal these negative employment effects most clearly,” write economists David Neumark and Peter Shirley.

But perhaps the most important thing to remember is that wage laws infringe on voluntary associations. People choose to work for many reasons, and wages are just one of them.

Many people, especially those trained to see the world through the lens of oppressor and oppressed, tend to see work as an exploitive act. But is it truly?

A couple of years ago I looked back on my own work experience as a teen. Only years later, as an adult, did I realize how valuable it was to me. In my first real job (as a groundskeeper on a golf course) I learned how to wake up early, punch a clock (on time), drive a stick-shift, operate light machinery, and much more. Making $5 an hour, I took home a couple thousand dollars (after taxes) that summer and improved my slice, but those were not the most valuable things I received.

We often forget that jobs are much more than a paycheck.

“[A first job] can mean a connection to a lifelong mentor, the ability to envision a career path, a boost in self-confidence, an appreciation for the value of education, an off-ramp from a life on the streets, a belief that you can be something,” wrote Bethany Henderson and Danielle Gray, two Obama administration officials who worked on youth job initiatives.

There’s a lot of truth and wisdom in that simple observation, though many fail to see it.

In his Bloomberg interview, Arin Dube recalls working at McDonald’s in 1989 and “feeling privileged” that he was going to go on to college while many of his colleagues would not.

It’s unclear if it occurred to Dube that such a privilege may never have been realized if he had not had the opportunity to earn experience and $3.85 an hour working at McDonald’s. It’s something he should consider.