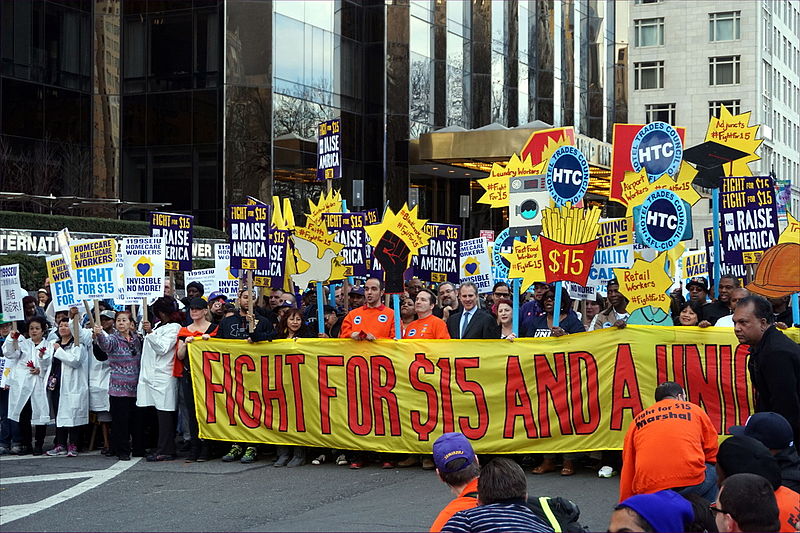 The two-thirds of Americans who support a minimum wage hike to $15 per hour now have an ally in the White House. And, President Joe Biden is already acting on his support by trying to include a $15 per hour minimum wage in his COVID-19 relief plan. This action would mark the first federal minimum wage increase since 2009. While this is bound to be celebrated without a second guess by many, it is now more important than ever to carefully examine the minimum wage as policy, not merely as rhetoric.

This must be an examination of its underlying economic theory, its consonance with American principles of self-ownership, and its empirical success (or lack thereof). Then, these ideas should be applied to the present circumstances the U.S. finds itself in to help find the correct policy.

The Economics of the Minimum Wage

In discussing wages, we are truly discussing prices—as a wage is nothing more than the price of labor. At the heart of a market economy is the price system, which uses supply and demand to determine prices. Because we live in a world characterized by scarcity, being able to efficiently allocate resources is paramount. However, some advocate interventions in the market to artificially adjust prices. Minimum wage laws would be considered one of these interventions in the price system.

The two main ways governments can distort prices are through price floors and price ceilings. The former mandates that prices must not go below a certain level, and the latter mandates that prices must not go above a certain level. Minimum wage laws are a floor on the price of labor. While it may seem desirable to ensure that low-skilled workers get paid “fairly” or that businesses cannot “price-gouge,” these interventions do not come without consequences.

By making it illegal to pay workers below the prevailing wage, it relegates workers without adequate skills to unemployment.

Minimum wage laws also price those with low skills, and thus low productivity, out of the market. By making it illegal to pay workers below the prevailing wage, it relegates workers without adequate skills to unemployment. After all, no rational business owner would pay a worker who generates $5.00 per hour of economic value a wage of $15 an hour. They’d pay him nothing at all and not hire him.

At its most fundamental juncture, the promise of government to protect life, liberty, and property is truly a promise of self-ownership.

Economist and professor Walter E. Williams describes this, writing “I am my private property, and you are yours.” Williams goes on to explain that by starting from a premise of self-ownership, it becomes quite easy to determine policy. If a policy violates an individual’s right to self-ownership, it is immoral and should not be instituted.

Minimum wage laws are an explicit violation of one’s right to self-ownership and free association. The job of the government is to secure our pre-existing rights, not violate them. If party A agrees with party B on a contract—and this contract does not negatively affect anybody else—there is little reason for the government to intervene.

While the case against minimum wage laws based in economic theory may be well-founded, advocates of increasing the minimum wage argue that this is an issue not only of economics, but of humanity. However, the empirical evidence unambiguously suggests that basing our policy on economics—not what sounds good on the surface level—is the best way to ensure the fullest humanity of our fellow-citizens.

A review of the history of minimum wage laws will reveal the fundamental flaw with such policies: they create unemployment among those with low skills. The most obvious example of low-skilled workers are teenagers.

In January of 1948, the unemployment rate among those aged 16-19 was 8.5%. This was nothing extraordinary, as low unemployment rates among teenagers were common at that time. However, this was also around the time when the government started to institute harsh wage regulation.

The adverse effects of the minimum wage impact different communities to different extents.

While initially instituting a minimum wage did tremendous harm, that harm has been exacerbated in cities across the country which have increased their minimum wage.

In 2016, the minimum wage in Seattle, Washington became $13 per hour. Subsequent studies by the University of Washington have demonstrated its negative effects. While low-wage workers saw a 3% increase in hourly wages, it corresponded with a 9% decrease in hours worked. This meant that there was “a reduction of over $100 million per year in total payroll for low-wage jobs.” This came out to a loss of about $125 per job per month.

Moreover, there was also a “significant reduction in the rate of new entries into the workforce.” What this means is that while there was a modest pay increase, it was offset by reduced hours. It also prevented new workers from entering the workforce.

In considering the perverse consequences to low-skilled teenagers who are simply trying to grasp onto the first rung of the economic ladder, it should be concluded that minimum wage laws act as barriers to progress. Rather than providing an opportunity for teenagers to begin their development, minimum wage laws break off the bottom rungs of the ladder, making it impossible to climb.

This is Still True in the Pandemic

Some suggest that in a time of economic downturn—as we are currently in—it is in the best interest of both individual workers and the economy as a whole to increase the minimum wage. They argue that because the downturn is a consequence of decreased demand, putting more money in the pockets of those who are likely to spend it is an easy way to stimulate the economy. This, however, is a specious argument.

If those in power truly cared about the workers, then they would be instituting policies which grant them the freedom to work.

The COVID-19 pandemic has already eliminated over 100,000 businesses and, with them, livelihoods. For the businesses which have been lucky enough to weather the storm up to this point, profits are razor-thin.

The question must become what a minimum wage hike would do to the hundreds of thousands of businesses which are on the edge of going defunct forever. Common sense tells us that it would suck that last bit of air out of innumerable businesses. If those in power truly cared about the workers, then they would be instituting policies which grant them the freedom to work.

As a result, minimum wage policy during an economic downturn should be the same as when there is no downturn.

Even as more and more Americans embrace a $15 minimum wage, it will be important to stay grounded in economic realities and empirical data. No amount of rhetoric, virtue signaling, or false claims about the nature of prices can change those things.

Our best hope to get out of this pandemic still standing, and then achieve prosperity in its aftermath, is to allow people to work and earn a living. Making it illegal for those without adequate skills to work at a wage which matches their productivity is bad policy, as is continuing to make it illegal for hard working business owners to make a living as a result of the pandemic. There are real concerns regarding public health, but the evidence consistently shows that most people who become infected with COVID did not contract it at restaurants, but rather in their own homes.

The same people who advocate minimum wage laws and restaurant closures also endlessly bemoan “inequality.” What they fail to realize is that it is their policies which are creating the wider inequality they lament. In the end, we should be championing people’s ability to work, to make a living, and to live free from excessive government interference.