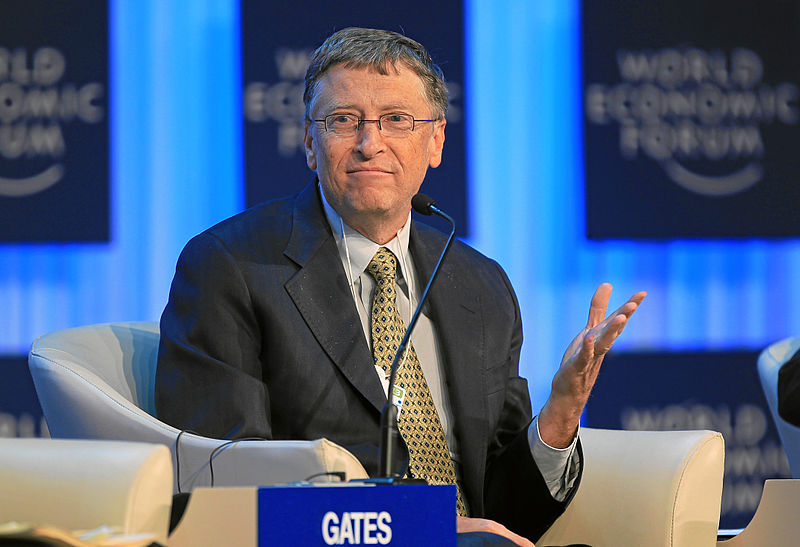 “In a typical year the world emits over 51 billion tons of greenhouse gases, and as we keep doing that, the consequences for human life will be catastrophic.”

So begins the promotional video for Bill Gates’s new book, How to Avoid a Climate Disaster. It’s a harrowing thought, really, that the world could be on the brink of catastrophe. But Gates is optimistic that we can mitigate the climate crisis if we take the right steps in the coming years.

Those steps may be painful, however. Drastic threats call for drastic measures, Gates seems to reason, and the chief measure he recommends is completely eliminating greenhouse gas emissions.

“The case for zero was, and is, rock solid,” Gates writes. “Setting a goal to only reduce our emissions—but not eliminate them—won’t do it.”

One of his proposals for reaching net zero emissions is direct air capture, which takes carbon dioxide out of the air and stores it underground. He also hopes to leverage developments in wind and solar power to clean up the energy grid, and encourages us to pursue technology breakthroughs to reduce emissions in other industries.

One of the more radical changes Gates recommends is transitioning our diets to synthetic meat.

“I do think all rich countries should move to 100% synthetic beef,” Gates remarks in an interview with MIT Technology Review. “You can get used to the taste difference, and the claim is they’re going to make it taste even better over time.”

I’ll admit I’m skeptical as to whether fake meat will be able to replace the real thing anytime soon. In any case, Congresswoman Lauren Boebert wins the prize for the best reaction to Gates’s suggestion.

Come and take it, Bill. pic.twitter.com/9bjFrfVn3Q

To call Gates’s goals ambitious would be an understatement. Currently, roughly 80 percent of US energy comes from fossil fuels, so reducing emissions to zero would require a complete transformation of the energy grid. Add to that changes in agriculture, manufacturing, and other industries, and we’re looking at a complete overhaul of the modern American economy.

Just one major cost would come in the form of public spending on clean tech, which Gates recommends increasing fivefold to $35 billion per year. That’s a high dollar figure, to be sure, but the real cost is the resources, such as land, labor, and materials, that get used up for these investments.

Wind farms, for example, take up land—and a whole lot of it—that could have been used for housing developments or other productive purposes. Notably, turbines and other supporting infrastructure only take up about 3 percent of the total land used for wind power, while the rest of the land is typically left “as is” to avoid air flow obstructions. As a result, it takes at least 60 acres of land to produce one megawatt of wind power.

With respect to materials, the silicon that goes into solar panels is silicon that can’t be used to make microchips. And with respect to labor, workers that produce synthetic meat in subsidized meat plants are no longer producing the other goods and services they’d be producing in more productive operations.

So the true cost of this public spending isn’t really the dollars and cents. Rather, it’s the lost opportunities to pursue other projects that meet other needs. Economists refer to these lost opportunities as the “opportunity cost” of an expenditure. Of course, it’s easy to ignore these costs because they are so invisible, but that doesn’t make them any less real. And especially when we’re talking about spending $35 billion per year, we need to keep in mind just how many foregone opportunities that entails.

With that said, public spending is hardly the only part of Gates’s plan that would involve significant costs. Indeed, the regulations he proposes for the energy industry would also have detrimental effects on the economy, and especially on the poor.

The problem with regulations is that they make it far more difficult to produce energy, because production has to be shifted away from economical methods and toward inefficient methods. So not only will less energy be produced, but energy will also become far more expensive. This is especially harmful for the poor, who rely on cheap, plentiful, and reliable energy for transportation, heating, and other basic needs.

Opportunity costs factor in here, too. When people are forced to spend more money on energy, they have less money to spend on other things, such as food, rent, or medical insurance. Ironically, we would also have less climate resilience because fewer resources would be going toward better infrastructure.

Opportunity costs extend far beyond green energy policies, of course. In the classic book Economics in One Lesson, for example, Henry Hazlitt illustrated the concept of opportunity costs with the example of a government bridge.

“The bridge exists. It is, let us suppose, a beautiful and not an ugly bridge. It has come into being through the magic of government spending. Where would it have been if the obstructionists and the reactionaries had had their way? There would have been no bridge. The country would have been just that much poorer [so it seems].

Here again the government spenders have the better of the argument with all those who cannot see beyond the immediate range of their physical eyes. They can see the bridge. But if they have taught themselves to look for indirect as well as direct consequences they can once more see in the eye of imagination the possibilities that have never been allowed to come into existence. They can see the unbuilt homes, the unmade cars and radios, the unmade dresses and coats, perhaps the unsold and ungrown foodstuffs….What has happened is merely that one thing has been created instead of others.”

The government-funded initiatives which Gates is proposing could very well be developed if he gets his way. There would be more wind farms, more solar panels, and more direct CO2 capture facilities. Those things would visibly exist. But as with the bridge in Hazlitt’s story, we must also consider everything that would have been prevented from existing. In many cases, this could be living essentials that people depend on for survival. Indeed, if we implement everything Gates is proposing, it could mean millions being thrown into poverty and thousands of deaths as a result.

So while it may be appealing to pursue climate solutions, we should keep in mind the words of Thomas Sowell. “There are no solutions. There are only trade-offs.” And not all trade-offs are good ones. Some trade-offs are of the “out of the frying pan, into the fire” variety.

Thus, while Gates’s book prescribes “how to avoid a climate disaster,” the question that must not be neglected is whether those prescriptions will cause humanitarian disasters far worse than any they prevent.