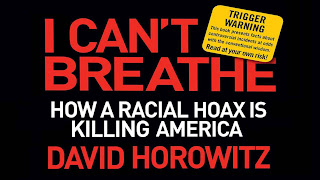 At FrontPageMag.com, Mark Tapson  reviews David Horowitz’s new book I Can’t Breathe, a book that takes a deep dive into the Black Lives Matter (BLM) organization. “The self-proclaimed trained Marxists who founded that subversive movement exploited, and continue to exploit, [26 black] victims in order to incite a civil war in America by hyping a false narrative of the systematic targeting of blacks by law enforcement.”

I have not yet read Mr. Horowitz’s book, but Mr. Tapson’s review provides solid information on the many race hoaxes and propaganda that are tearing apart America’s social fabric.  Here’s part of the review:

Horowitz’s aim with the book is to puncture BLM’s grotesque narrative, which is supported by the Democrat Party and amplified by its media enablers. He begins the book with a summary of our current racial divide, which was exacerbated by deadly, nationwide BLM rioting – “a summer of insurrections” – in 2020 that constituted “the costliest sustained acts of civil disorder in American history.” The siege of Portland by violent leftist activists, the Democrat movement to defund police departments and the subsequent crime waves that swept the nation, the anti-American messaging, the 2016 massacre of five white cops in Dallas at the hands of a BLM-inspired black extremist – Horowitz weaves all these ugly threads and more to create a dark tapestry of the devastation that Black Lives Matter’s myth-making has wrought:

The casualties of the scorched-earth war unleashed by Black Lives Matter dwarf the total casualties of all the alleged racial injustices the organization has protested. The atrocities instigated and inspired by BLM encompass scores of innocent wounded and dead, both black and white… Surveying these disasters, one could reasonably conclude that, thanks to Black Lives Matter campaigns to abolish police departments, advances in both race relations and protections for urban black communities have been set back fifty years.

Horowitz compiles the names of 26 black victims BLM claims were murdered or maimed by the police since the death of Trayvon Martin in 2012 sparked the launch of the movement. They include the aforementioned Martin, Floyd and Taylor, as well as Eric Garner, Michael Brown, Tamir Race, and Freddie Gray, to name some of the most well-known. Then – in chapters on how the BLM movement began, grew, and went national and then international – Horowitz goes on to dissect all 26 incidents according to the facts, backed up by over 70 pages of endnotes. He demonstrates how BLM has lied about every single one in its quest to aggravate racial tensions and rip America apart at the seams. . . .