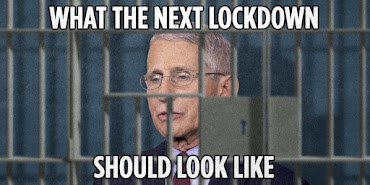 The meme is via PatriotPost. Thomas Gallatin reports:

“NIH … categorically has not funded gain-of-function research.” Yes it has.

National Institutes of Health official Lawrence Tabak issued a letter Wednesday admitting that the agency did indeed provide funding for gain-of-function research at the Wuhan Institute of Virology via the U.S. nonprofit EcoHealth Alliance. That’s a big problem for more than one reason.

Tabak writes that NIH funding went to a “limited experiment” in which a test was conducted to see if “spike proteins from naturally occurring bat coronaviruses circulating in China were capable of binding to the human ACE2 receptor in a mouse model.” The modified coronavirus did make the mouse “become sicker” than the non-modified virus.

While Tabak avoids using the term “gain-of-function,” it is clear from his descriptions that such research is exactly what he admits the NIH funded. That the NIH was involved in funding gain-of-function research should come as a surprise to no one, as Anthony Fauci himself had been a longtime proponent of the controversial practice.

Back in 2012, Fauci argued in support to gain-of-function research, contending: “Scientists working in this field might say — as indeed I have said — that the benefits of such experiments and the resulting knowledge outweigh the risks. It is more likely that a pandemic would occur in nature, and the need to stay ahead of such a threat is a primary reason for performing an experiment that might appear to be risky.”

Fauci’s clearly favorable views of this research would also explain why he chose not to alert White House officials in 2017 when he lifted the ban on the practice. It also appears to explain why the NIH’s funding of gain-of-function was not direct but funneled through EcoHealth Alliance, giving Fauci the cover to later claim that the NIH was not directly involved in funding gain-of-function research.

Yet when Senator Rand Paul (R-KY) pressed Fauci over NIH funding, an irate and contentious Fauci retorted: “You do not know what you are talking about. … If anybody is lying here, Senator, it is you! … You are entirely and completely incorrect. The NIH has not ever and does not now fund gain-of-function research in the Wuhan Institute of Virology.”

Just in case someone wasn’t clear, Fauci added, “I will repeat, the NIH … categorically has not funded gain-of-function research to be conducted in the Wuhan Institute of Virology.”

We knew this before, but now even the NIH is tacitly admitting that Fauci lied not only to Senator Paul in sworn testimony but to the American public. . . .

Read the rest here.  It’s scary, because too many people I know still rely on the mainstream media for news propaganda.