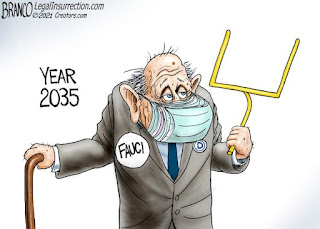 JD Rucker as FreedomFirstNewtwork posted a 2-minute video that expose Dr Fauci for the fraud that he is:

There is no greater flip-flopper in the world than Anthony Fauci. It’s not just that he’s able to change his perspectives back and forth at will; there are plenty of politicians and bureaucrats who do that well. But Fauci takes it up several notches by not only justifying it inexplicably by claiming to hold to “science,” but also by somehow keeping a straight face every time he debunks himself, which is quite often.

A video posted to Twitter shows a compilation of Fauci vs Fauci incidents. Since it’s on Twitter it’s limited to just over two minutes long of Fauci’s greatest flip-flopping hits, but one could easily compile hours of footage where the medical tyrant backtracks, retracks, and takes his own narratives completely off the rails.

The worst part about all this isn’t that Fauci is driven by agenda, though that’s bad enough. The worst part is that millions of brainwashed Americans still believe this guy is credible. This is due in large part by the Biden-Harris regime’s unwillingness to call him out as well as mainstream media incessantly propping him up, but here’s the thing. Americans have a responsibility to educate themselves. The information is readily available. There is an overabundance of evidence that Fauci is an evil, narcissistic, totalitarian pawn of the architects of The Great Reset. Those who don’t realize this are delusional.

The science doesn’t “evolve” as Fauci often says. The narrative surrounding the science evolves. Nothing in the science has changed about face masks since the initial studies released last year showed they don’t stop Covid-19 and can be detrimental to those who wear them for any extended period of time. The only things that keep changing are the short-term goals of Fauci’s puppetmasters, and they use him to play the public like little children fawning over a birthday party magician.

Source link is here.  And it includes the video (approx. 2 minutes);  I have been unable to locate it elsewhere online; it may already have been cancelled.