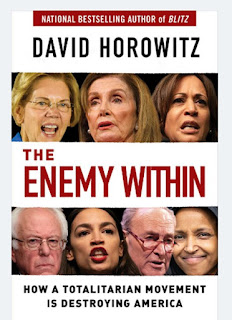 National treasure David Horowitz of Freedom Center offered his remarks at the annual Restoration Weekend conference.  This extract is via FrontPageMag:

As we have been saying now for several years, these enemies of our great country now control the Democrat Party and all three branches of government and have taken us to a point where we might be one election away from losing our country altogether.

A small but not insignificant sign of our impact was brought home to me the other day. I was on a radio show whose host happened to be a trustee of one of California’s K-12 school districts. He told me that at a school board meeting the other week, a protesting parent shouted out, “David Horowitz says, ‘Don’t call them liberals.’”

The K-12 schools have become the latest battlegrounds of the left’s efforts to dismantle our country’s constitutional order and replace it with a socialist tyranny. The weapons of political war are words. If the other side is calling you “racists,” “white supremacists,” “insurrectionists,” and “domestic terrorists,” and you are calling them “liberals” and “progressives,” you are not going to win that war. That has been a key message of the Center for more than 30 years.

Republicans and conservatives seem intent on preventing our political enemies from being embarrassed by the malignant plans they have in store for us. Over the past seventeen years Democrats have conducted a relentless war against the First Amendment, have blown up our southern border, and flown unvetted criminals, COVID carriers, and terrorists to unknown destinations in our country in the middle of the night. Everyone knows they are doing this to rig future elections and create a one-party state. Are they ruthless and unprincipled enough to do this? They have locked up hundreds of individuals arrested in the Capitol on January 6th and put many of them in solitary confinement for 10 months. The crime these “insurrectionists” are charged with is “trespassing.” You bet Pelosi and Biden and their entourage are ruthless.