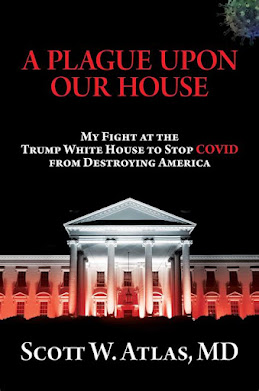 Jeffery A. Tucker at the Brownstone Institute reviews Dr Scott Atlas’s book chronicling his time as an advisor in the Trump White House, and his analyses of the COVID hoaxes (h/t Tyler Durden at Zero Hedge):

A President Betrayed by Bureaucrats:
Scott Atlas’s Masterpiece on the Covid Disaster

I’m a voracious reader of Covid books but nothing could have prepared me for Scott Atlas’s A Plague Upon Our House, a full and mind-blowing account of the famed scientist’s personal experience with the Covid era and a luridly detailed account of his time at the White House. The book is hot fire, from page one to the last, and will permanently affect your view of not only this pandemic and the policy response but also the workings of public health in general.

Atlas’s book has exposed a scandal for the ages. It is enormously valuable because it fully blows up what seems to be an emerging fake story involving a supposedly Covid-denying president who did nothing vs. heroic scientists in the White House who urged compulsory mitigating measures consistent with prevailing scientific opinion. Not one word of that is true. Atlas’s book, I hope, makes it impossible to tell such tall tales without embarrassment.

Anyone who tells you this fictional story (including Deborah Birx) deserves to have this highly credible treatise tossed in his direction. The book is about the war between real science (and genuine public health), with Atlas as the voice for reason both before and during his time in the White House, vs. the enactment of brutal policies that never stood any chance of controlling the virus while causing tremendous damage to the people, to human liberty, to children in particular, but also to billions of people around the world.

For the reader, the author is our proxy, a reasonable and blunt man trapped in a world of lies, duplicity, backstabbing, opportunism, and fake science. He did his best but could not prevail against a powerful machine that cares nothing for facts, much less outcomes.

Throughout the book, Atlas points to the enormous cost of the machinery of lockdowns, the preferred method of Anthony Fauci and Deborah Birx: missed cancer screenings, missed surgeries, nearly two years of educational losses, bankrupted small business, depression and drug overdoses, overall citizen demoralization, violations of religious freedom, all while public health massively neglected the actual at-risk population in long-term care facilities. Essentially, they were willing to dismantle everything we called civilization in the name of bludgeoning one pathogen without regard to the consequences.

The review does include some criticism, but it nevertheless concludes with this:

We all owe Atlas an enormous debt of gratitude, for it was he who persuaded the Florida governor to choose the path of focused protection as advocated by the Great Barrington Declaration, which Atlas cites as the “single document that will go down as one of the most important publications in the pandemic, as it lent undeniable credibility to focused protection and provided courage to thousands of additional medical scientists and public health leaders to come forward.”

Atlas experienced the slings, arrows, and worse. The media and the bureaucrats tried to shut him up, shut him down, and body bag him professionally and personally. Cancelled, meaning removed from the roster of functional, dignified human beings. Even colleagues at Stanford University joined in the lynch mob, much to their disgrace. And yet this book is that of a man who has prevailed against them.

In that sense, this book is easily the most crucial first-person account we have so far. It is gripping, revealing, devastating for the lockdowners and their vaccine-mandating successors, and a true classic that will stand the test of time. It’s simply not possible to write the history of this disaster without a close examination of this erudite first-hand account.