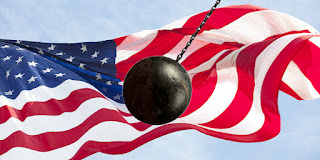 This past year has been overwhelming to patriots everywhere – and not in a good sense.  Is it as bad as we think?  Dilbert creator Scott Adams apparently thinks so;  he recorded a podcast, and since I rarely listen to podcasts, I was grateful to see that Mark Wauck at Meaning in History transcribed some of it.  Here’s what Mr. Wauck posted:

A reader sent Cleveland Tea Party Patriots a link to the Scott Adams podcast from 19 November. It’s nearly an hour long, but I’ve transcribed a brief portion of it. Adams is talking about the feeling he has that people have had enough, that there’s a growing sentiment of: We’ve had enough. He goes on a mild rant about the way he—and we—used to think just a few years ago, compared to where we’re at now. Of course it’s subjective, but I think it can be supported by a wide range of events that speak to public sentiment:

I think a lot of people have hit a wall.

We used to think that official data from government and big companies was probably mostly honest and sufficiently accurate, even if it had some problems. Do you believe that anymore?

I think now we believe that all data is fake. Because it mostly is. Maybe not intentionally, but there’s always some context left out or something. I think we’re now more likely to think that all data is fake as the default assumption. Whereas, it used to be the opposite. Just a few years ago.

Just a year ago a lot of people–smart people!–would have said the Second Amendment doesn’t protect you from your government, because the government has better guns. Do you believe that now? Today, does anyone believe that guns are NOT the only thing keeping us from being Australia? I think Australia gave you all the learning you needed on that. The lockdown that Australia is experiencing, that can’t happen here in America–because of the Second Amendment.

And then, of course, the Russian Collusion Hoax taught us that there’s no limit to government corruption. I honestly thought there was a limit. … When the people on the Right were first talking about the Russian Collusion Hoax being a Hillary Clinton paid operation with the Deep State behind it, CIA was part of it, and all that–do you know what I thought? I thought, well, there’s certainly something sketchy going on here, but it’s not THAT bad. It’s not like collusion between Intel agencies and Democrats. It’s not THAT. But it was. It was every bit of that. The worst thing you can imagine that anyone could do to this country? They were doing it. It’s the worst thing your government could have done to you–and they were doing it HARD.

So my understanding of how far my government would go to retain power and screw the citizens is way different than it was a few years ago. Now I know they’ll do ANYTHING. I didn’t think that before. And they’ll tell any lie because they can get away with it. I didn’t think THAT. I didn’t think anybody would lie in public if it was easy to fact check them. Wrong. WRONG. You can lie all you want in public, cuz you’ve got your own fact checkers. …

I have to say, that’s about where I’m at now. Not that I was gullible before, or slow to catch on to the various hoaxes that have been perpetrated by the Power Elite, but I guess—a bit like Adams—I resisted the notion that it could be THAT bad.

Source link is here.  Most of us can add to Adams’s list:  election fraud; foot-dragging on election audits (thanks, GOPe); “infrastructure” spending (thanks, GOPe); “vaccine” mandates; an occupant of the White House who has some brand of dementia;  the dangerous pull-out from Afghanistan, esp. leaving behind billions of dollars in equipment for our enemies;  opening the borders;  illegal immigration;  and now, all-too-predictable inflation.  All of it THAT BAD.