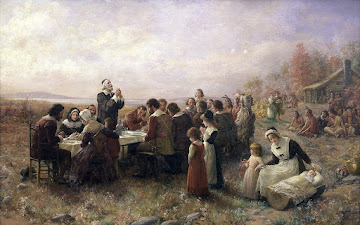 Image credit: en.wikipedia.org
Re-posted from earlier Cleveland Tea Party Thanksgiving blogs:
What Thanksgiving really means To Americans
A couple of years ago, Jerry Bowyer, writing in Forbes Magazine, recounted the real significance of Thanksgiving, a significance that is too often lost among the turkey dinners, football games, and stories about Indians who befriended the early settlers.
In 1620, the Plymouth pilgrims based their original community on Plato’s Republic, a collective model that appealed to their religious convictions and morality. But the communal model didn’t work for them. After two years of failing harvests and resulting malnutrition, disease, starvation, and deaths, the pilgrims replaced the communal model with a model based on private property. The ensuing harvest was abundant, with surpluses available for trade.
Their Thanksgiving celebrated the triumph of the individual, private property, and incentive, over collectivism. At first, the pilgrims felt guilty because they were putting self-interest over the seeming altruism of socialism. Yet the devout survivors had learned two lessons: 1) that a theoretical and Utopian collective society fails, and (2) in real life, private property and capitalism produce prosperity. For them, God, not Plato, knew best. Accepting the principles of private property and self-interest was God’s way of harnessing self-interest to the greater good. We know all of this because an elder and Governor of the Plymouth plantation, William Bradford, kept a journal and it survives today. Mr. Bowyer’s earlier article, with additional historical background, is here.)
Here’s Bowyer’s “How A Failed Commune Gave Us What is Now Thanksgiving.”
It’s wrong to say that American was founded by capitalists. In fact, America was founded by socialists who had the humility to learn from their initial mistakes and embrace freedom. One of the earliest and arguably most historically significant North American colonies was Plymouth Colony, founded in 1620 in what is now known as Plymouth, Massachusetts. As I’ve outlined in greater detail here before (Lessons From a Capitalist Thanksgiving), the original colony had written into its charter a system of communal property and labor.
As William Bradford recorded in his Of Plymouth Plantation, a people who had formerly been known for their virtue and hard work became lazy and unproductive. Resources were squandered, vegetables were allowed to rot on the ground and mass starvation was the result. And where there is starvation, there is plague.
After 2 1/2 years, the leaders of the colony decided to abandon their socialist mandate and create a system which honored private property. The colony survived and thrived and the abundance which resulted was what was celebrated at that iconic Thanksgiving feast.
As my friend Reuven Brenner has taught me, history is a series of experiments: The Human Gamble. Some gambles work and are adopted by history and some do not and should be abandoned by it. The problem is that the human gamble only works if there is a record of experimental outcomes and if decision makers consult that record. For many years, the story of the first failed commune of Plymouth Bay was part of the collective memory of American students. But Progressive Education found that story unhelpful and it has fallen into obscurity, which explains why (as I alluded to before) a well-educated establishment figure like Jared Bernstein would be unaware of it.
I’m often asked why our current leadership class forgets the lessons of the past so often. They are, after all, very smart men and women. Don’t they know that collectivism will fail?
No, they don’t. Not anymore. For much of our history, our leaders were educated in the principles which were to help them avoid errors once they have joined the ruling class. They studied to learn how to not misuse power. Now our leaders learn nothing of the dangers of abusing power: their education is entirely geared to its acquisition.  All of their neurons are trained on that one objective – to get to the top. What they do when they get there is a matter for later. And what happens to the country when they’re done with their experiments is beside the point: after all, their experiments will not really affect them personally. History is the story of the limitations of human power. But the limits of power is a topic for people who doubt themselves and their right to rule, not the self-anointed.
That’s how it is now, and that’s how it was in 1620. The charter of the Plymouth Colony reflected the most up-to-date economic, philosophical and religious thinking of the early 17th century. Plato was in vogue then, and Plato believed in central planning by intellectuals in the context of communal property, centralized state education, state centralized cultural offerings and communal family structure. For Plato, it literally did take a village to raise a child. This collectivist impulse reflected itself in various heretical offshoots of Protestant Christianity with names like The True Levelers, and the Diggers, mass movements of people who believed that property and income distinctions should be eliminated, that the wealthy should have their property expropriated and given to what we now call the 99%. This kind of thinking was rife in the 1600s and is perhaps why the Pilgrim settlers settled for a charter which did not create a private property system.
But the Pilgrims learned and prospered. And what they learned, we have forgotten and we fade.  Now, new waves of ignorant masses flood into parks and public squares. New Platonists demand control of other people’s property. New True Levelers legally occupy the prestige pulpits of our nation, secular and sacred. And now, as then, the productive class of our now gigantic, colony-turned-superpower, learn and teach again, the painful lessons of history. Collectivism violates the iron laws of human nature. It has always failed. It is always failing, and it will always fail. I thank God that it is failing now. Providence is teaching us once again.
Happy Thanksgiving!