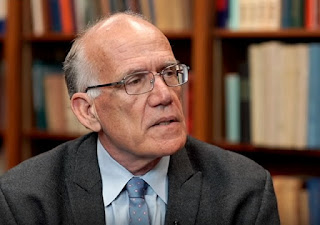 The inimitable Victor Davis Hanson provides a glimmer of hope in his American Greatness piece “Cracked Icons: The Corrupt and Mediocre Heroes of the Left are Imploding”:

With fits and starts, we are slowly returning to reality after four years of mass hysteria. Our media-deified, progressive icons are finally being exposed as the deceivers they always were.

He closes with “Basement Biden”:

Do we remember old Joe Biden from Scranton? He was the media fiction who hid his dementia in his basement for a year, spouting that Trump had wrecked everything and he would bring about decency, prosperity, an end to the virus, and “healing.”

The Biden candidacy was one of the most cynical in American history. The unhinged far-Left adopted a befuddled Biden as the respectable veneer necessary to see their hard-core, but stealth socialist agenda finally enacted. Key to a virtual presidency would be virtual voting, as 102 million mail-in and early votes were never subject to the previous standards of authentication and statistical rejection rates of the past—rendering Election Day voting mostly a memory.

Good Joe was billed as the antithesis to the tweeting Bad Trump. Yet he clearly wasn’t. Even Joe’s tweets (e.g., “We are with you, Jussie”) were often more ridiculous.

Within days the “moderate” Joe Biden set in place policies that were guaranteed to begin wrecking the country, to send his polls down into the 30s, to ensure the likely wipe-out of his congressional majorities in 2022, and to make himself and the media who created his myth disliked, and the laughingstock of the country. Trump became unpopular when over 90 percent of media coverage was negative, and the Left concocted a never-ending circus of hoaxes, starting with Russian collusion; but Biden is disliked, despite an obsequious media and weaponized bureaucracies on his side.

We are in the first 10 months of a cognitively challenged president who is deteriorating geometrically not arithmetically, with a vice president in waiting whom the nation fears is more dangerous, even knowing Biden is half-senile. He may be reaching the point of embarrassment at which the media and Left no longer find him useful and begin leaking and staging his exit.

Single-handedly the Biden puppeteers have managed to restore the Trump record of achievement simply by doing the opposite of what Trump did, thereby ensuring their own failure and reminding voters of what once was working.

Biden may end up with the most unrecognized achievement of the modern age: the radical transformation of leftwing Latinos into a conservative majority of fed-up voters—a development that will likely cause the Left to demand an end to open borders on the assumption too many Mexicans and Central Americans are ending up like wizened Cuban and Venezuelan immigrants.

We could add other fallen heroes of the Left who once saturated our recent air waves—Robert Mueller and his dream team that would rid the world of Trump, and the quartet of John Brennan, James Clapper, James Comey, and Andrew McCabe. They, by their dishonesty, prevarications, and careerism have almost single-handedly tarnished the reputations of the Washington-based intelligence and investigatory agencies. Yet now, the Left has no more need of them. They are already fading from the public awareness, as careerists who managed to erode support from all those who once most readily defended their own institutions.

The lesson of these fallen icons?

They were deified for larger reductionist and anti-Trump agendas. Yet they were also always dispensable when their utility eroded, due to their mediocrity—of such a magnitude that even our American Pravdas could no longer continue to manipulate them for advantage.