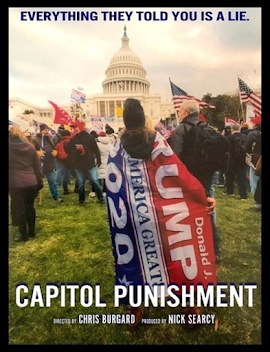 At PJ Media, Victoria Taft previews Nick Searcy’s film (released last November) Capitol Punishment, a documentary about the January 6 “insurrection” in DC.  You can watch the documentary online – click on the link at the end of the article.  Here’s Ms. Taft’s preview:

Actor Nick Searcy’s Movie ‘Capitol Punishment’
Is the Best Documentary
About Jan. 6. He’d Know, He Was There.

Nick Searcy was at the huge Trump rally on Jan. 6, 2021, in Washington, D.C., and was so unnerved and shaken by what he saw that day that he made a movie about it. The actor/producer/director’s movie, Capitol Punishment, is the most complete story about that day and its aftermath that anyone has attempted to date. It’s a must-watch, even if you think you know all there is to know about that day.

Searcy is here to say that you don’t. He says it with a knowing wink and a rueful laugh.

The actor, who stars opposite former Mandalorian actress Gina Carano in the upcoming film Terror on the Prairie and who’s appeared in some of the biggest Hollywood movies, including The Shape of Water, Three Billboards Outside of Ebbing, Missouri, Moneyball, Cast Away, and Fried Green Tomatoes and co-starred in the hit television FX series Justified, knows something about stagecraft.

But he was stunned at the stage-crafted events of Jan. 6.

“Everything that we are being told [about Jan. 6] is a lie and Americans are being persecuted to support that lie,” says Searcy who features national security experts in the film who attest that the assault on the Capitol for political ends “was years in the making.”

Searcy’s idea for the movie with filmmaker and director Chris Burgard began when the two men attended the Jan. 6 rally because they “believed the election had been stolen” stolen from Donald Trump. Searcy told me on my Adult in the Room Podcast that they figured any story they told would be about the typical anti-Trump media malpractice. But, he told me, that idea went out the window when they witnessed agents provocateur pretending to be Trump supporters.

After the rally, Searcy and Burgard began to see footage of police admitting rally-goers and protesters into the Capitol Building, video of Antifa provocateurs changing clothes between black bloc and MAGA clothes, and video of a notorious Leftist militant who trains activists in violent tactics and who worked with government workers to take over D.C. buildings beginning on Election Day. In the documentary, Searcy shows an organizing Zoom call in which professional protest provocateur, Lisa Fithian, urges her co-conspirators during a Zoom call to shut down the Capitol. She told them, “we are going to be in crisis but we want it to be one that we’re creating. Whoever’s got the guns can win. Let’s take over the buildings.” Her tactics look an awful lot like what happened on Jan. 6.

Searcy is unsparing in his treatment of these questionable activities leading up to and on Jan. 6, 2021, and the prosecutions of people who were either invited into the Capitol or who stepped over an imaginary line where a fence delineating a no-go zone had been taken down by early provocateurs such as Ray Epps. You’ll hear of the FBI raids at their homes, the handcuffing of their children, and the inside story of the life of Ashli Babbitt from her husband, Aaron.

He is outraged about the Trump supporter’s shooting inside the Capitol. He wants answers to his questions about why Lt. Michael Byrd “just shot her” without warning. “If he was going to stop people from coming in,” he asked me, “then why didn’t he train his gun on the people who were breaking windows right in front of him? There was no evidence that she had a weapon, there was no reason to think she was a threat. … Those windows had been broken out and he could have said something at that point [as a warning] ‘if you come through that window I’ll shoot.’”

And who was in front of him breaking the windows? John Sullivan, another Antifa/BLM provocateur who stood next to Babbitt, urging her and others to go through the broken windows and into another part of the Capitol. He recorded and live-streamed her killing.

Related: Democrats Want Jan. 6 to Be a Holy Day for Their Dark Church
Searcy believes organizers “wanted a bigger massacre.”

“That’s the real cynical view of that killing, is they wanted more people dead,” he said.

Lives lost. Lives ruined. A president’s legacy muddied. And a government arrayed against them. Searcy tells it all.

He says the question isn’t whether you believe that he convincingly lays out the case; it’s how you could believe the FBI, Justice Department, and political actors are incapable of pulling off such a caper. He points to the Russian “collusion” hoax and other incidents in his movie as exemplars of such gaslighting and perfidy by the feds.

Searcy’s film was released in November, and one wonders how such a quality product was conceived and produced in under a year.

The first anniversary of Jan. 6 passed in ignominy, complete with stage-crafted Washington outrage, but don’t forget the real story.

Source here. Wow.  Share this with you family and friends – including those who believe that Ray Epps is a loyal Oath Keeper.