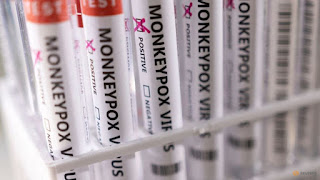 Stephen Green (Mr. VodkaPundit) is suspicious about the recent appearance of monkeypox. (This blog linked on the subject yesterday). Here’s some of his “Insanity Wrap” column from today at PJ Media:

Who needs to worry about monkeypox? “Everybody,” said Presidentish Joe Biden in Korea on Monday. “We’re working on it, hard, to figure out what we do,” he said.

Would it be too bold to suggest that they already have a plan?

Washington and the Global Panicmonger Industry just won’t give up trying to scare us, will they?  So we’re all going to die. If we don’t follow orders, that is.

But who is this “everybody” that Biden insists should be all aflutter over the pox?

As of Saturday, the World Health Organization reported there were 92 cases in 12 countries, and a further 28 suspected cases under investigation. The U.S., U.K., Canada, Australia, Germany, France, Italy, Spain, Sweden, Belgium, Portugal and Netherlands have all confirmed cases.

Maybe 120 cases, mostly restricted to a small subset of the populations of a dozen countries with more than half a billion people — and they basically have to be doing it to get infected.

I refuse to worry about monkeypox unless we find out that those wacky Wuhan scientists have been monkeying around with it.

At this point, things are starting to feel less like Groundhog Day and more like a reboot of Stanley Kubrick’s Dr. Strangelove, but with biological weapons instead of nukes.

Maybe it’s time we learned to stop worrying and love the plague.

But whatever happens: No. More. Lockdowns.