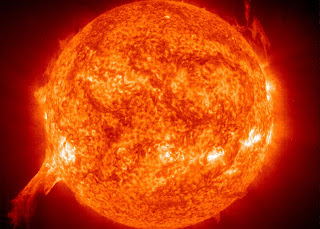 Mike Nuen had a stand-up comedy routine back in the 70s;  he proposed that in order to solve a few problems, all we had to do was blow up the sun.  Any potential consequences to the Earth’s climate or weather patterns could be easily handled by the Army Corps of Engineers.  He always got good laughs during the routine.

Now some group of demented climate change warriors (billed as the Climate Overshoot Commission) is seriously proposing something pretty similar. Here’s the headline and sub-head from PostMillenial:

The Thomson Reuters Foundation asked
“Could ‘dimming the sun’ help turn down global heating?”
and said the answer may be stratospheric aerosol injection

So their deliberations include injecting aerosols into the atmosphere from aircraft — specifically to interfere with incoming sunlight, and this presumably could “fix” the climate change “problem.”  Read about this insane proposal here.

“Dimming the Sun”?  What are they thinking?

I am not a scientist, just a concerned layperson.  But it would seem to be impossible to overstate how dangerous this idea is, and it is frightening to consider that the group is getting enough attention for the report to be linked on a major aggregator, Rantingly.  As far as I have read, science is nowhere near to understanding how and why the Earth’s climate cycles function as they do.  Scientists know certain contributing factors and variables, such as geothermal activity, the Earth’s axis in relation to the sun, and so on. Anthony Watts has a big page specifying potential variables at his website, WattsUpWithThat; click here.

In the not-too-distant past, Henrik Svensmark, a Danish physicist, conducted experiments at the CERN particle accelerator to attempt to measure the impact of incoming “charged particles from the sun, [how they] interact with cosmic rays as they approach Earth” and how that interaction affects cloud seeding, arguing that “the amount of cloud cover determines how hot or cold the planet is.”  His hypothesis remains controversial;  many in the science community really did not want to hear about it;  see here.  That should tell anyone who is interested that the field of climate science remains in a state of uncertainty, with competing working hypotheses.  And like most other fields, politics and funding now play large roles in all of this.

As far as I have read, the uncertainties far outweigh any certainties concerning the multiple variables influencing Earth’s climate, it should be obvious that deliberate interference with the sun’s many effects on Earth would be not just foolhardy and reckless, but potentially suicidal.

Earth’s climate has been variable during its 4+ billion year existence. We still don’t understand how it has taken care of itself.  Nobody seems to know what optimal temperatures are, much less how they might be sustained or reversed.  No idea.  Any deliberate interference surely COULD accelerate the next Ice Age.  Or worse.