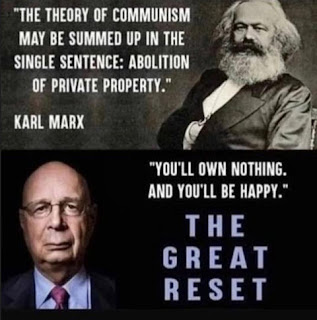 David Solway at The Pipeline outlines the New World Order. He begins:

It is disturbing to note that the greater portion of the public do not seem to be aware of the vast ideological movement for social transformation called the Great Reset. Those who are at least partially informed consider it merely another conspiracy theory. Some among the so-called elite—the media, the academy, the political stratum—consider the Great Reset as a rational and benevolent response to the specter of overpopulation and the threat of populist uprisings. Others among the patrician class, doubtless a majority, are engaged in promoting what they know to be a concerted attempt to destabilize and supplant the long-established order of ideally democratic governance that has slowly and incrementally characterized the liberal societies of the West, dating from the Magna Carta (1215) and the Peace of Westphalia (1648) to the approximate present.

We should make no mistake about this. The revolutionary project, whether denominated as the New World Order, the U.N.’s Agenda 2030, or the Davos-centered Great Reset—different terms for essentially the same impetus—under the influential leadership of Klaus Schwab is apocalyptic in its aims. It envisages a world in which the middle-class will have been expunged, the global census markedly winnowed, and a China-like social credit system introduced in which citizens will be under constant digital surveillance determining what they are allowed to possess, rent, use or spend.

The last decade or two has served as a trial run for what is to come. Media censorship and administrative fiat culminating in the gradual suppression of long-standing freedoms and economic expectations have tenderized the public for a grim and reductive future in which they will own nothing and be miserable. The Great Reset is poised to profit from such prefatory conditioning in the laboratory of public affairs and political enactments. There is no getting around the brazen fact that we are now facing arguably the greatest menace ever to gather its forces against the liberal civilization of the West. This is not hyperbole. For the regents of deconstruction, it’s full speed ahead. The Great Reset is approaching steadily and with growing rapidity, unless we are vigilant, muster our resources, and meet the challenge with renewed vigor and conviction. Whether the effort will bear fruit remains to be decided, but there is, really, no alternative.

By 2030, you will own nothing and you will be happy.  Or else.  Read the full column here.