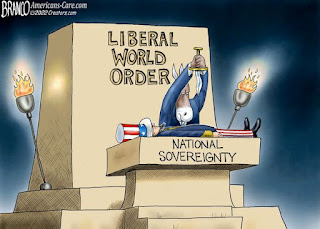 How to fight the New World Order? Over the past weekend, Neil Oliver released his latest monologue, and it is a doozy.  Here’s part of the transcript:

I think about the answers to those questions all the time. Right now, I wonder what would happen if those who are cold in their homes – millions of people – just turned on their heating and turned off their direct debits and standing orders. What would happen if, when the bills came, we all just agreed to toss them on the fire? All of us together? What would happen, if millions of us, peacefully acting as one just stood together in quiet defiance? I could be wrong, but I don’t think there’s enough cells in the prisons, enough judges to hear the cases. If the system wasn’t already broken – by them – such actions would break it.

I’ve said it before, and I’ll say it again: the social contract – that notion by which we surrender power to the state in return for services and safety – is broken beyond repair. They broke it, not us. Successive governments – not just the present bunch of cardboard cut-outs … have, over decades, knowingly and deliberately betrayed every aspect of that contract. It is null and void and we, the blameless party, are no longer bound by its conditions.

We the people – the sovereign people of this country – don’t just hold the power: we ARE the power. We loan some of it – a short-term loan – to governments. And those governments are supposed to serve us, do our bidding. NEVER the other way round. We tell them what to do.

Hundreds of years’ worth of governments has quietly and secretively presided over a financial system that is no more than state-sanctioned fraud. Power to create money out of thin air was put in the hands of an entirely private, unelected, unaccountable business and this power has been abused to make a tiny group unimaginably rich by enslaving all of US with debt. That system is now on the point of collapse. The West is bankrupt, and governments and bankers are scrambling to solve a problem: how to subtract every last shekel from the people while still having a handful of wealthy bankers, and their enablers, left over.

But history tells us we should never underestimate the power of the many.

Them’s fightin’ words.  Could the strategy work?  Possiby, even probably.  My concern is, of course, with the iron-fisted and ruthless tactics now employed by the Deep State and the New World Order corruptocrats.