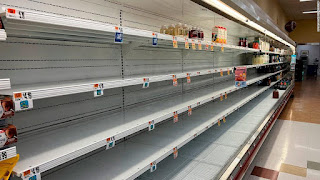 The editorial at Issues & Insights pretty much answers its own questions:

. . . Most by now have seen reports that Dutch officials are closing as many as 3,000 farms in the Netherlands, the world’s second-largest exporter of agricultural products by value even though it’s only slightly larger than Maryland, to comply with crackpot European Union carbon dioxide emissions rules. It’s possible that eventually more than 11,000 farms will be shut down, and 17,600 forced to sharply cut their livestock numbers.

On our side of the Atlantic, the malefactors are also busy. Just the News is reporting that the Environmental Protection Agency is quietly quadrupling the regulatory cost of carbon emissions in a new war on fossil fuels, which is, of course, also a war on the food supply.

“If you think about the fact that they would impose this damage factor, let’s say on farmers, because it applies to fertilizer,” Louisiana Solicitor General Liz Murill said on the John Solomon Reports podcast. “Fertilizer emits nitrous oxide. So fertilizer is a big contributor. If every family farmer now is going to have to pay more to obtain fertilizer to fertilize crops that feed us, well, what’s that going to do to the price of food?”

As it turns out, all this is happening at the same time “the number of people affected by hunger has more than doubled in the past three years”, according to the United Nations, as “almost a million people are living in famine conditions, with starvation and death a daily reality.”

If only the WEF [World Economic Forum] were some fringe group that had no influence. But it’s not – it’s a well-funded syndicate with an axis of powerful followers.