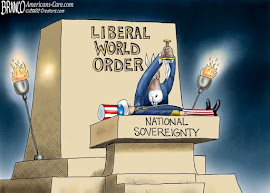 Antonio Graceffo at The Epoch Timesreports on some of the basics of the World Economic Forum (WEF) and why this blog continues to follow the developments:

. . . The WEF effectively recommends policies on everything, from creating digital identity systems and restructuring the global political system to the cessation of fossil fuel use, individual car ownership, and the banning of eating meat.

Even though it’s a private organization with no global or political authority, the event was attended by a long and distinguished list of elected officials and political appointees. This year, 51 heads of state, including Germany’s Chancellor Olaf Scholz, presidents of Spain, South Korea, Poland, and the Philippines, and China’s Vice-Premier Liu He, in addition to 56 finance ministers, 19 central bank governors, 30 trade ministers, and 35 foreign ministers, were at the forum.

. . . The WEF is a globalist organization that wants to compromise the sovereignty of nations, rewrite the world order, and dictate how we live, eat, and think. And for some reason, our leaders and media support them.

As powerful as the WEF participants may be, there are more of us little people than there are of them, and this blog is trying to stay on top of developments.  At the end of the day, I like Neil Oliver’s attitude:

They think they’ve got us scared enough to accept the whole damned lot of it.  Here’s the thing: I am not afraid of them.  I don’t even take them seriously.