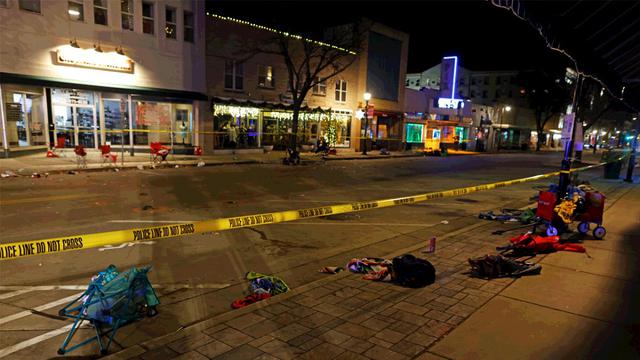 “The government-trained domestic terrorist who
willfully plowed into the Waukesha Christmas
parade  — Darrell E. Brooks — was wrongfully out
on bail for a charge of running someone over on
November 5, 2021, but he was let out ON PURPOSE.
Serial murderers and convicted felons are routinely
released from jail to do dirty deeds for The Powers
That Be.  Sometimes federal and state prison
sentences are improperly reduced to place a
hardened criminal on the street in order to carry
out a special unlawful mission or terror attack for
the power elite.

Undeniably, the timing of the Waukesha terrorist attack was made to occur right after the Rittenhouse trial which ended in Kyle’s complete and unanimous acquittal.  In this manner, the people of Wisconsin were delivered a hard blow for rightly vindicating an innocent man who was relentlessly persecuted by the Left and the Mainstream Media.

However, there’s another major reason for this extremely violent and premeditated attack against the American people in Wisconsin.

There is a rapidly rising crescendo of protests throughout the world community of nations that can no longer be ignored by the CIA’s Mockingbird Media.  And, the utterly treacherous corporate media in America has been given strict orders not to cover those massive protests and riots for fear of the U.S. citizenry of catching on.

The elites certainly don’t want US out in the street and/or shutting the whole place down.  Such an eventuality would show the whole world that the New World Order globalist cabal is losing its power and influence by the day.

Therefore, the only way the NWO cabal can thwart the inevitable mass awakening of the American people is to do what they always do—distract US.  This is one of the primary reasons why they executed such an atrocious black operation just prior to Thanksgiving in Waukesha.

The fact that this well-planned terrorist attack targeted a “Christmas parade” further advances the agenda of Cultural Marxism whose aim is to destroy Christianity throughout the USA.  The perfidious cultural marxists have spent decades trying replace Christmas with anything else that will stick in an effort to diminish the biggest Christian holiday of the year.

These godless CM creatures are likewise attempting to replace Thanksgiving Day with Black Friday—a day dedicated to unbridled consumer spending across the country.  Folks don’t even sit down on Thanksgiving anymore they are so preoccupied with the once-a-year Internet sales on the following day.

KEY POINTS: It’s important to correctly understand that all terror attacks have multiple goals and purposes.  Whereas the globalists wanted to punish the great state of Wisconsin for meting out justice for the Rittenhouse case, they are also exceedingly desperate to change the global conversation away from the rapidly intensifying Covid vax mandate protests.  Their biggest fear is that We the People take back our power in all 50 states, because such a sea change will see the elites hanged live on the Internet for their countless crimes against humanity committed over centuries.