This has been a very weird year. For the first time in I don’t know how many years, all the bars in New Orleans are closed and they have asked people not to come to the city at all. For once, we aren’t missing anything, and on top of that, we had a giant snow storm with freezing rain, so we were stuck inside our house with no way to go anywhere for 4 days. I had already planned to celebrate Mardi Gras at home, but couldn’t order food to pick up, and instead had to cobble together my own foods. 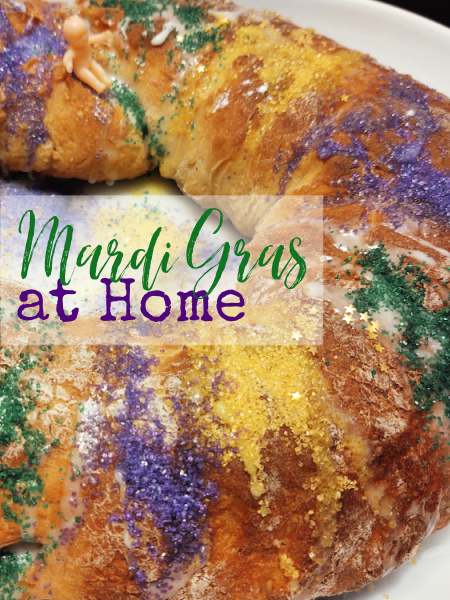 Mostly, things just went sideways in a lot of ways for this celebration. My backdrops didn’t come in time, so I had order back-ups that were too small and cheesy. I worked with what I had in my freezer and pantry, and made a king cake from a mix that I was unsure if it would even come out. It did, but they should call it king bread, because it’s not soft on the outside at all and has the consistency of French bread. But, c’est la vie! Laissez le bon temps rouler! (let the good times roll!) 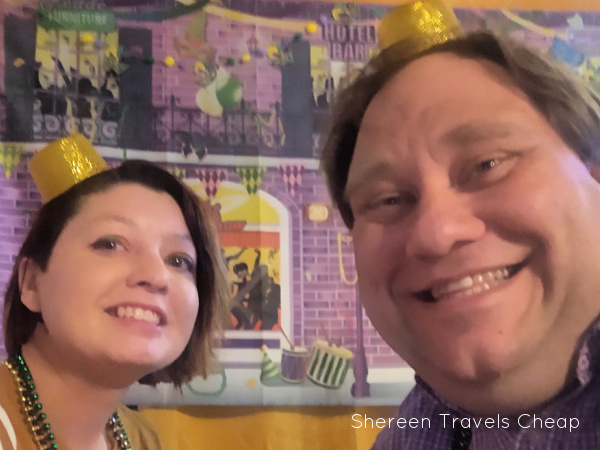 Luckily, Mardi Gras was virtual this year, and you can watch their 3-night celebration on YouTube: Night 1 | Night 2 | Night 3. We enjoyed the hours we watched and even learned more about the celebration and the krewes than we already knew from visiting Mardi Gras World. 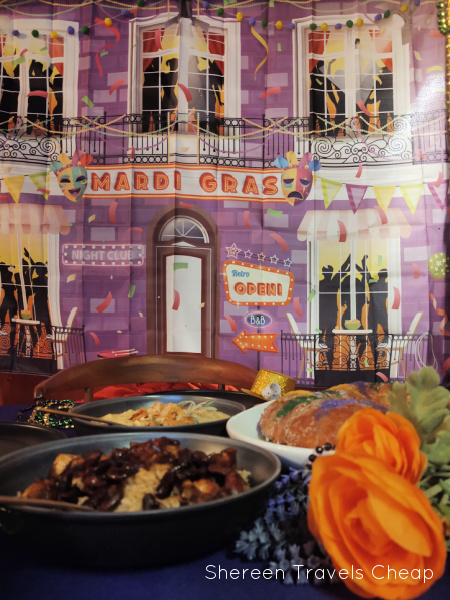 That was our entertainment, along with talking about things from our previous trip, so let’s talk about food and decor: 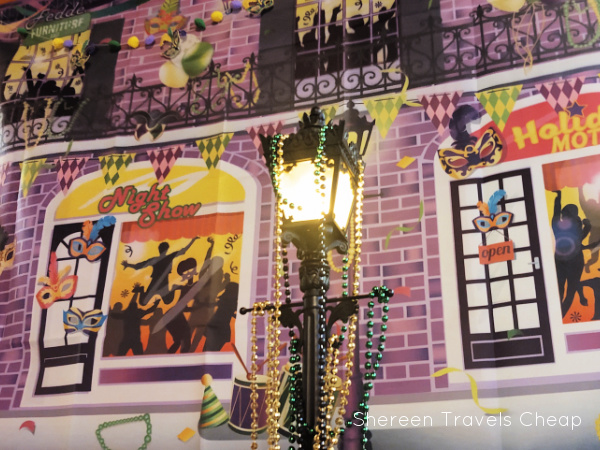 You can’t have a Mardi Gras celebration without beads. It’s just not possible. I got this adorable miniature street lamp (truthfully, I ordered one and ended up with two) that looks a lot like the gas lamps in The French Quarter and covered it with beads. Even outside of Mardi Gras, you’ll find beads strewn in trees, on lamp posts, on fences, on signs. You name it. While there is a volunteer group that goes through and picks up and recycles beads that litter the city after the week is over, some are left because they can’t be gotten or because it adds to the atmosphere. 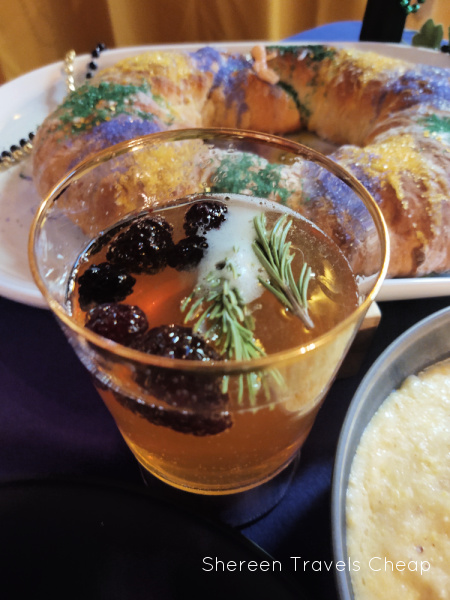 I mean, have you ever seen a photo of people in Nola without a drink – or five – in their hand? There are some. I didn’t drink much while I was there, but I had a few. Eric and I had the same drink here – rhubarb shrub, carbonated water, frozen blackberries, and a sprig of rosemary. I added whiskey to mine. No crazy drink bill, I don’t have to drink it out of a plastic cup, and I’m not surrounded by thousands of drunk people. I feel like this was a win all the way around. 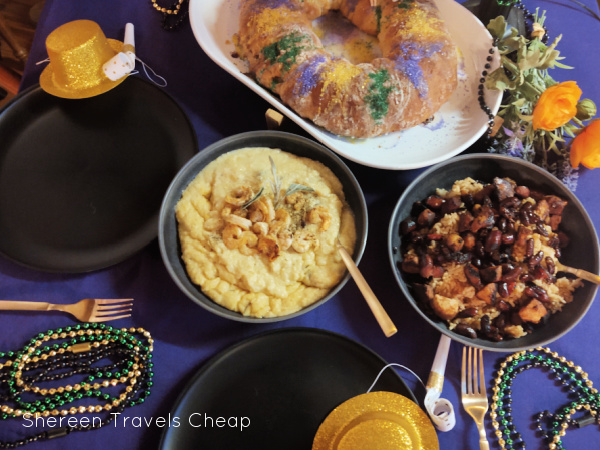 What’s a celebration without food? I mean, that’s not a celebration I want to be part of. Since I had to rely on what I had on hand, I couldn’t have jambalaya, po’boys, or etouffe. I don’t love two of those three things anyway. I would have loved to have some fried catfish though. The closest I could have done to that was cod.

Instead of those things, I went with standards that I’ve had and made before: red beans and rice – with cajun-seasoned chicken and sausage – and shrimp and grits. Both are really easy to make, can be seasoned to taste and changed up to suit what you like. I added cheese to my grits and used coconut cream instead of milk (because I didn’t have any) and simmered it with some fresh sage and rosemary to give it depth. I used little smokies for sausage, as that was what was in my freezer. It was all very delicious and filling. Here are some easy recipes you can try if you want to make your own creole feast. 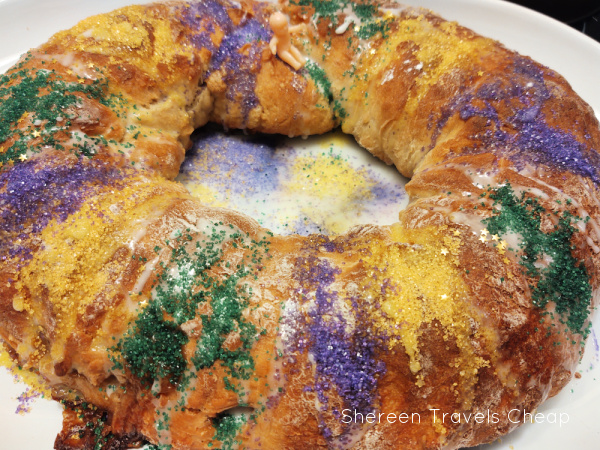 I was going to make cheater beignets out of Pillsbury biscuit dough, but then I got lazy, because I already made cake and thinking about mountains of powdered sugar hurt my teeth. You can have Mardi Gras without beignets though, so we only had King Cake. I bought a mix some weeks ago, because it had everything I needed in the box. Because it’s technically a yeast bread, you have to let it rise twice and then let it cool before you ice and sugar it. Contrary to popular belief, the baby isn’t actually baked inside, it’s just set under the cake normally. Well, mine was very crusty and that wasn’t going to work, so short of shoving it into it, it wasn’t going to be hidden. I just set it on top and now he looks like he’s on a slide. LOL! 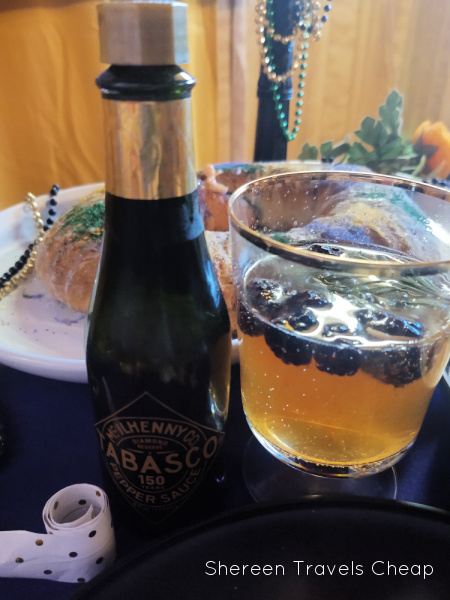 There are literal stores that only sell hot sauce in Lousiana. They call them hot sauce bars, because you can buy from hundreds of different kinds, but you can also sample them beforehand. We bought a ton to ship home as gifts. We also visited the Tabasco factory on our trip. While I’m a green Tabasco fan, Eric likes anything that’s super vinegar-y. For a gift, they had a fancy, limited-edition, anniversary blend that I purchased. This bottle - the 150th Anniversary Diamond Reserve Red Sauce – cost $45 after shipping, but it will never be made again, and also why we still have it to use for things like this. A few drops is all you need. It’s very spicy and also has some really bright flavor. Yes, it’s meant to look like a champagne bottle, but also the dark glass keeps UV light out that can damage the blend and change the taste of the sauce. 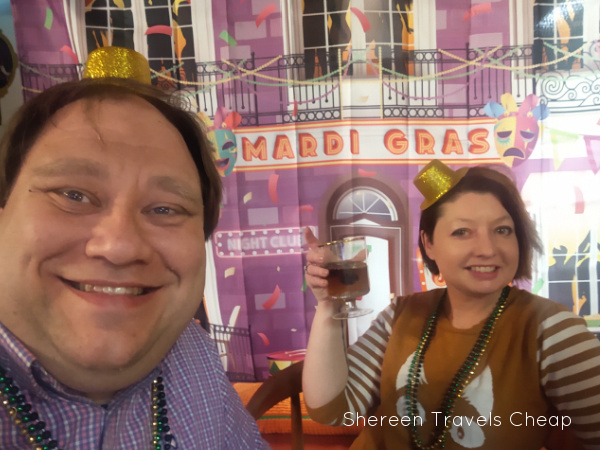 And that’s a look at our laid back, snowed-in, DIY Mardi Gras celebration. Because most of this was stuff I had at home, it cost us less than $60 to put this on. Since I’m still waiting on my good backdrops, you can rest assured that there will be a follow-up Nola staycation post, where I can actually get food someone else made, including beignets. Until then Sante! (Cheers!)

If you’re hoping to get to New Orleans when we can get back to traveling and they’ve started welcoming tourists again, here’s a great post I did on spending 48 hours there.

Have you ever been to Mardi Gras? Or even celebrated at home/in your city?