Egyptian religion was very ritualistic, involving activities of daily ceremony (complex rituals celebrating the Divine) and regular festivals, celebrations or public, with a predefined frequency (daily, quarterly, monthly, yearly, etc.) molded into a religious calendar, based on stellar (star) chart (planets), seasonal (Sun and Sothic cycle), monthly (4 quaters of the Moon) and daily phenomena (decans and Earth rotation). These rituals were considered essential for both the living and the dead.
They also had the death rituals and ceremonies. Funeral rituals practiced by the ancient Egyptians understood the embalming and mummification. Mummies of Egyptians dead were placed in anthropoids (human form) coffins which were decorated with a likeness of the deceased. The coffins were then placed in sarcophagi of stone protection. 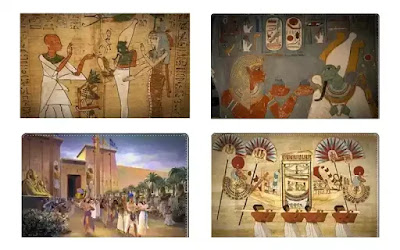 Funeral rituals are well known, but there were other very important funeral rites were performed, including the opening of the mouth “ritual. Royal marriages were most likely celebrated with much pomp and ceremony of attention. Kings often married women, many foreign princesses and similar articles, for political reasons.
It was also a good reason to give sumptuous feasts and offerings to the gods, and also the exchange of gifts to the bride’s father, who could be an important potential ally foreign in the coming days. Festival schedules tend to list the details of these celebrations, such as the date, the deity honored and perhaps a sentence on the involvement of a priest in a specific fashion rather terse.
Fortunately, the walls of the Greco-Roman temples at Dendera, Edfu, Esna, Kom Ombo and Philae provide additional information not included in the calendar of festivals, which enable us to reconstruct the events in more detail. In addition, papyrus scrolls and fragmentary biographical texts reveal fascinating and often hidden details such as processions, morning, noon and evening ablutions of divinity songs, and speeches.
Wag festival celebrated seventeen days after the New Year, has been linked to funerary rituals of ancient Egypt and was celebrated by individuals outside official circles religious, as well as the temples in major Egypt.
Opet Festival, citizens of Thebes and their guests from afar celebrated their seminal link between Pharaoh and all-powerful god, Amon, who in the New Kingdom became a god of the state. During the celebration, it was thought that the strength and power of Amun were ritually bequeathed to his son alive, the king.