The oldest Egyptian coins were Attic staters and tetradrachms having the name and types of Alexander. Modifications were soon introduced, but the weight at first remained unaltered. Presently, however, after a period of transition, during which Rhodian tetradrachms and smaller AR make a fitful appearance, the Attic standard was definitely superseded by the Phoenician.
The change took place shortly after B.C. 305. Probably it was not unconnected with the difficulty that must have been experienced in combining the Attic with the native Egyptian system, and particularly in adjusting the relations between coins of gold and silver on the one hand and coins of copper on the other. 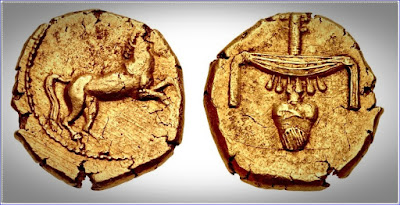 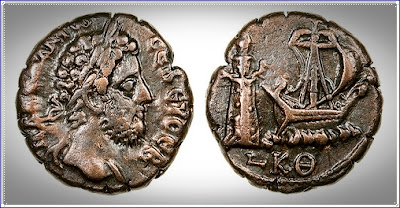 The papyri furnish striking testimony to the exceptional position occupied by the last-named metal in Egypt. Down to the end of the third century B.C. accounts are always stated on the basis of a silver standard, the values being expressed in drachmae, obols, and chalkoi.
From the reign of Ptolemy Epiphanes onwards the standard of reckoning is a copper one, at rates varying from 350:1 to 500:1.Although the image of one eagle (the badge of Ptolemaic royalty) is shown on the vast majority of ancient Egyptian Ptolemaic bronze coins, a two-eagle symbol forms the second most common reverse type.
The two-eagle reverse type first appeared c.262 BC in the time of Ptolemy II (285-246 BC) and occurred at various periods until the end of the Ptolemaic dynasty (Cleopatra VII, 51-30 BC).There were coins assigned to Cleopatra’s father (Ptolemy XII), her uncle (Ptolemy, King of Cyprus), her brother (Ptolemy XIV), sister (Arsinoe IV), Cleopatra VII, etc.
Barter system was prevalent in first half of ancient Egyptian era. Most of the produce was consumed by the producers themselves. What was left after landlords and tax-collectors had taken their share, could be sold by barter on the free market either directly to consumers or to professional traders.

Much of the grain was collected as taxes. Written withdrawal orders by owners of lots of grain were used as a kind of currency. These grain banks continued to serve growers and traders even after the introduction of coined money in the latter half of the first millennium BCE.Under the Ptolemies a central bank at Alexandria recorded all accounts of the granary banks dotting the country.

Payments were transferred from account to account similar to the modern giro system. Credit entries were recorded with the owners name being in the genitive or possessive case and debit entries in the dative case. Since the second half of the first millennium BCE gold, silver, and copper in specie were used mostly in dealings with foreigners, be they mercenaries or merchants.