The concept of marriage in Egypt is not an easy subject. While the Egyptians seem to have taken matesin what seems to be mostly throughout monogamous relationships. After the Third Intermediate Period, we start to find ancient “marriage contracts” that incorporate the term shepherd Shemet (price for “marrying” a woman) and especially to define property rights without elaborating on the act of marriage itself itself.

More abundant are divorce cases that also deal mostly with property settlements. Marriage was the normal and most desirable state for Ancient Egyptians of both genders and all social classes. Athenian men evinced little respect or affection for women and delayed marriage until well into their thirties, but most Egyptian men were eager to follow the advice of the wisdom literature urging them to take a wife while still young so they could found a household and raise a family.

Most men were married by the age of twenty to girls who might have been as young as fifteen. There was an age difference, but usually not more than two or three years. When examining ancient reliefs and statues, it is easy to assume that the ancient Egyptians marriage was similar to the institution today, but beyond these visual cues, there is little in the way of documentation to support this conclusion. 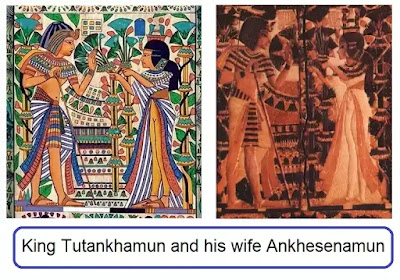 No documentary evidence of marriage ceremonies, whether real or marriage as a concept has been found. Usually there was a big party associated with the union of two persons, but we think it was just a social affair and has no real religious or moral implications.Traditionally, the term Hemet has been translated as “wife”, but it is probably more accurately “female partner”.

The legal and social implications of the word are unclear. Interestingly, the word salvation is the male counterpart in Hemet, but seems to have been rarely used. However, this is probably due to the funerary text most often be associated with men, and thus the female partner is known and defined by her husband.

Hebswt is another word that seems to apply to a female partner, but traditionally it has been translated as “concubine”. However, this meaning is less clear because, in a text of the New Kingdom both Hemet and hebswt are used together in apparent reference to the same female. It was suggested that the term could more accurately describe hebswt a second wife or third after the first died or was divorced.

Of course, our modern concept of marriage and romance is a relationship based on love between partners who are willing to share their lives together. But until the 26th dynasty, relatively late in Egyptian history, the bride herself seems to have little choice in marriage. In fact, during this period most of the marriage contracts are made between the father and husband of the girl. The father of the girl and her mother even had much more to say on the issue, then the bride.

After the 26th dynasty, the bride seems to have had more to say in her future husband, and we find sentences in marriage contracts that indicate a more defined.  In addition, the tradition of marriages brother / sister or father / daughter has been mostly confined to the kingdom of Egypt, at least until the Greek period. In tales from Egyptian mythology, the gods of marriage between brothers and sisters and fathers and daughters were common in the early periods, and Egyptian kings to perhaps felt it was a royal prerogative to do the same .

However, there are also theories that marriages brother / sister may also have strengthened the king’s claim to rule. It was not uncommon among ordinary people get married parents.   Marriage between cousins, uncles and nieces were quite common in Egypt before the Greek period. Interestingly, after the arrival of Greek, a study found that 24 percent of marriages among the common people were brother / sister relationship. Marriages were usually between persons of the same class, but seems to have been little consideration given to race or nationality, even. It was not unusual for a northern Egypt to marry a Nubian, or someone, even another country.

Among ordinary people, polygamy may well have existed as it obviously did in the royal class, but if this is the case, it was rare. We excavation known as Deir el Medina as housing for those most in line with mutual monogamy rather than polygamy. Yet, from the 13th dynasty (1795-1650 BC) on polygamy was common among kings and some of the ruling elite. Although one principal wife (hemet nesw weret) was chosen, others were probably taken by King, to ensure a royal heir, or cement relations with foreign countries or even powerful regional leaders. Kings could have as many as several hundred women, and in some other periods of high officials took more than one wife. Marriage contracts are not usually tell the age of the parties, but we know from other documents that marriage almost always occurred after sexual adulthood. The average age of girls at puberty was 12 to 13, and about 14 boys. Indeed, the boys, who had to meet certain construction work to support a wife and children in the future, were generally 15 years or more before considering marriage. However, in Roman times, we find the documentation of women being as young as 8 years, though most researchers believe that this is an exception and that the most common age for brides was 12 years or more.

In royal marriages, especially between siblings, the parties often seemed to be much younger. We know, for example, that Tutankhamun probably married his sister when he was about nine years. It was not uncommon that all together for older men who had generally lost their wives to death or divorce to marry very young women “.” Qenherkhepeshef, a scribe from Deir El Medina for example married a girl of 12 when he was 54.

Especially during the early periods of ancient Egypt, the groom made a payment to the father of the bride, normally worth about the cost of a slave. Later, this practice was abandoned and later the practice was reversed, where often the father of the bride had to compensate the husband for her maintenance. However, if the divorce took place, the husband was forced to continue some support to his ex-wife, usually amounting to about a third of his earnings.

All this said, there are many indications that husbands and wives in ancient Egypt were often happy and in love. There are many touching portraits and statues of families including spouses and children who disclose their marital pleasure and warmth within the family. 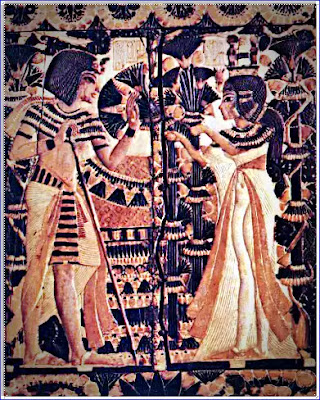 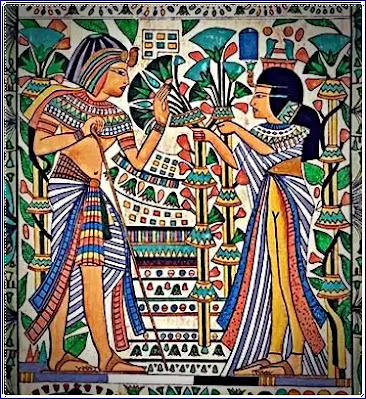 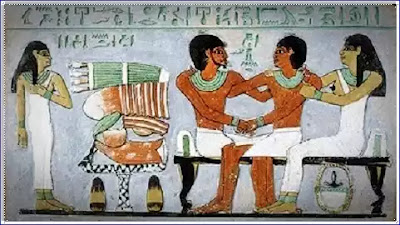 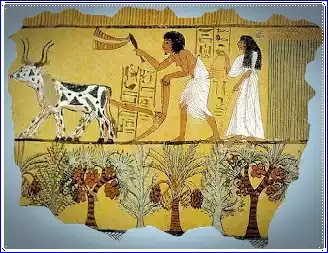 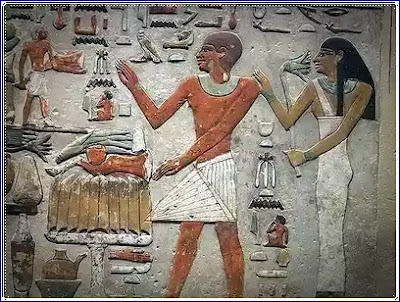 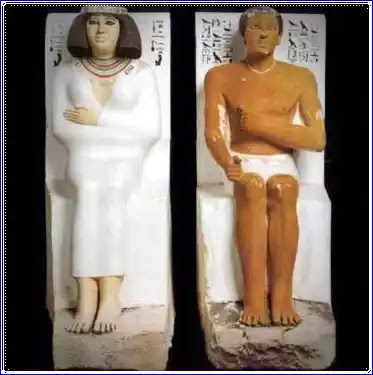 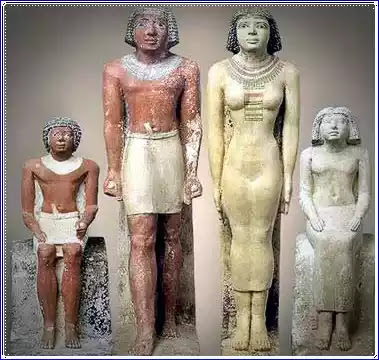 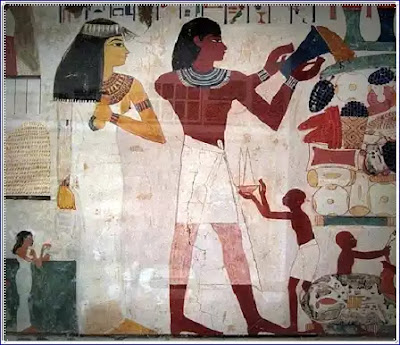 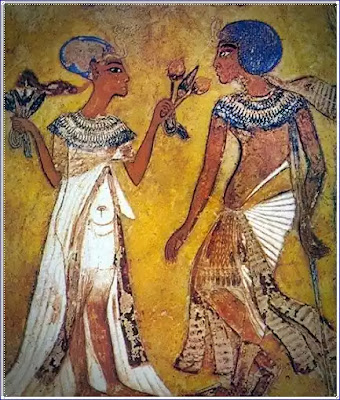 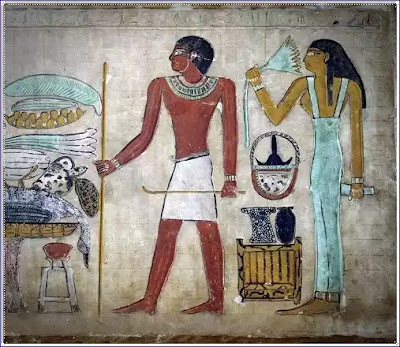 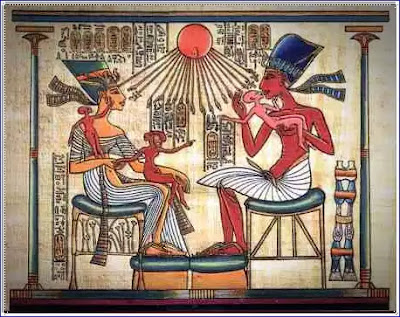 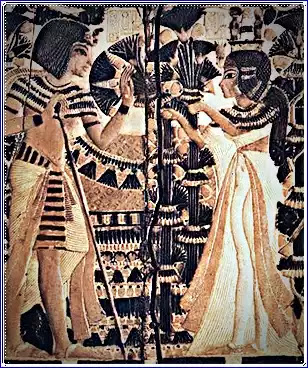