What started as my nerdy heart wanting to have a fun Harry Potter-themed party, has become an annual celebration with awesome, like-minded friends who clear their calendar for one day out of their summer and plan costumes months in advance and I feel like I’ve truly hit the jackpot with them. Our 9th Potter party is back in person and even though it was a bit smaller than usual, it was no less fun. 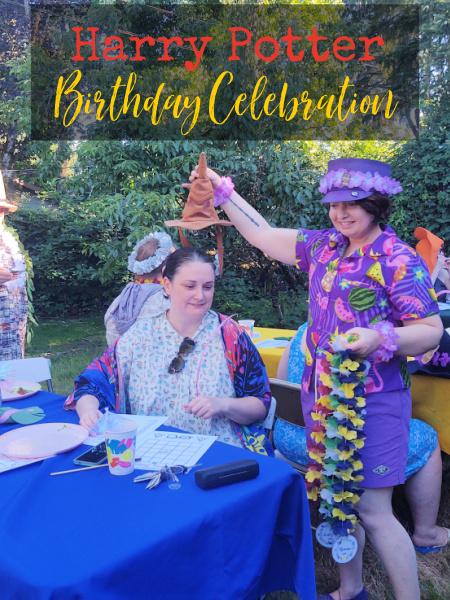 Our theme this year was Hogwarts Goes Hawaiian, which was inspired by the one line in The Goblet of Fire where Harry imagines Dumbledore on a beach in his long wizard robes putting sunscreen on his nose. I took that and ran with it, hoping someone would do a Hawaiian Snape. No one did, which was a bummer, but also gives me an excuse to do it another year for a different event.

This was supposed to be our theme in 2020, so we’ve had 2 years come up with ideas, as we did a virtual party in 2020 instead, which we themed Dragon Pox edition. We had a lot of stops and starts last year, and ultimately cancelled it altogether and blamed it on Dementors. I’ve been working on dying both my hat and shoes a glaring purple to match the rest of my Knight Bus conductor costume. This one will make another appearance in the future, too.

Stan Shunpike sorted everyone and gave them a lei in their new House colors – a departure from our usual House pins. I was able to do this by using our mini Sorting Hat that came from Build-A-Bear, who cycles through all 4 houses in different ways, so we were able to get equal team numbers, except for Hufflepuff, because we only had 11 people. 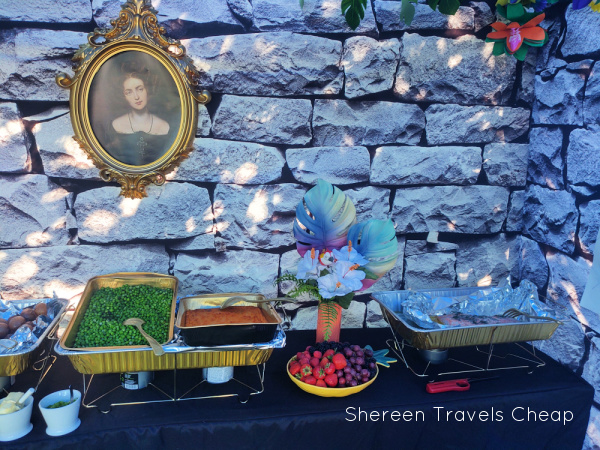 I make food and drinks from the books for every party I throw, and this year was no different. I tropical-ized them where I could. Everyone always raves about the food, making me feel like all my effort is worth it. The food and drink goes into the food tent, which I decorated this year as the Great Hall with castle walls and portraits. This year’s menu: 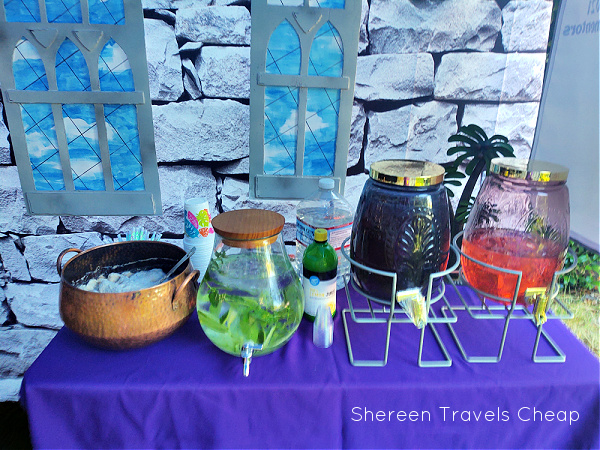 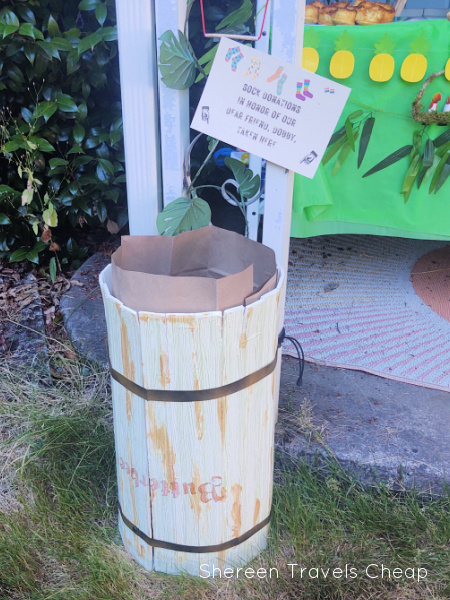 I asked guests to bring new socks for donation, because Harry was always someone who wanted to help others. Usually we sell tickets for raffle items, and I donate that money to PDXpelliarmus, but this year I wanted to do something different. We’ll be donating socks to a local shelter, because they are always in need of them.

Each year we do N.E.W.T.-level book trivia and two other games, but this year it has been extremely hot, so I chose Bingo (always a winner) and then two other games that wouldn’t require too much moving around in case it was just as hot the day of the party. These two games, which I called Quaffle Toss and Wingardium Leviosa were riffs on kids’ party games and were actually the hit of the party. Here’s how they work: 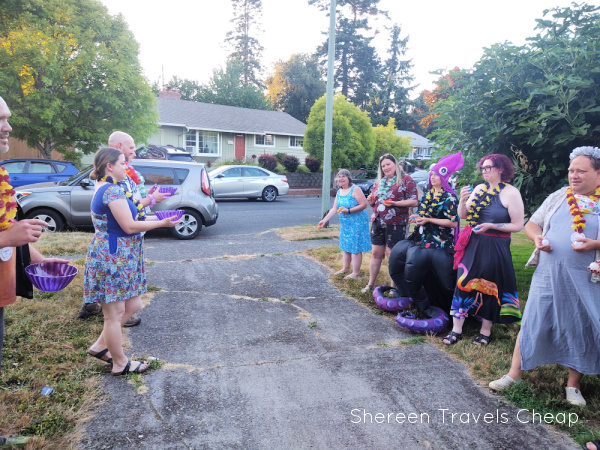 Quaffle Toss: You have a Keeper with a shallow bowl – I bought mine at the dollar store – and the rest of their team has a total of 5 ping pong balls. Space the Keeper and their team a reasonable distance apart. We used the driveway as a good buffer. The first team to get all 5 “Quaffles” in their bowl together, wins. If they bounce out, they have to keep trying until all 5 are in the bowl at once.
You can dole out points as you wish, but since I thought this was going to be a bit hard, I decided the first team to finish got 50 points and all other teams got 25. I think next time I will do 1st, 2nd, 3rd, and 4th.
Originally, I meant to make Quidditch hoop boards with nets behind the hoops and use more “Quaffles” and have different point totals for each hoop. Play would have continued until one team’s Seeker found a Snitch in a kiddie pool full of ball pit balls. Unfortunately, I ran out of time and it would have been much more involved, so I will save that for a future party.
Wingardium Leviosa: One team member has a wand – I used these – and another team member has glow bracelets. Play goes until one team gets all their bracelets on the wand by tossing them across the space. I did 5 bracelets per team, because I thought maybe it would take them longer to do with the small hoops. We went head-to-head with two Houses at a time. The losers of those rounds competed for 3rd and 4th place, and the winners competed for 1st and 2nd. 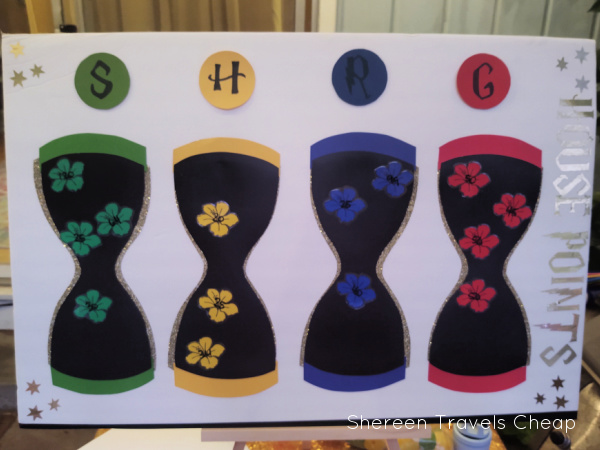 Once all the games are done, I tally up points and announce the winners of the House Cup. 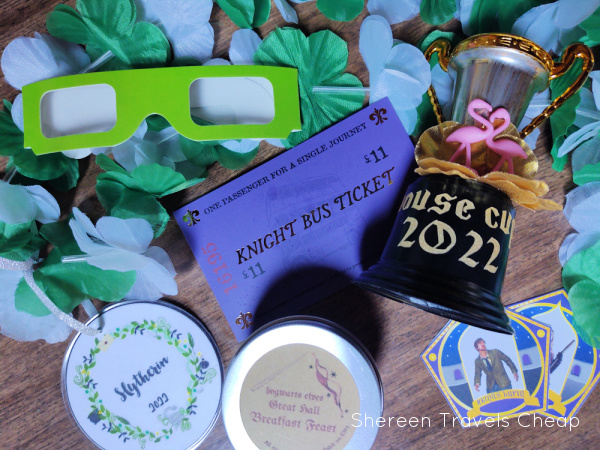 Everyone in that House gets a winner bag with their own little House Cup, which is different every year. They also get bonus Chocolate Frog cards to add to their collection (they get two in their regular frog box), and then some things I think go with the theme. 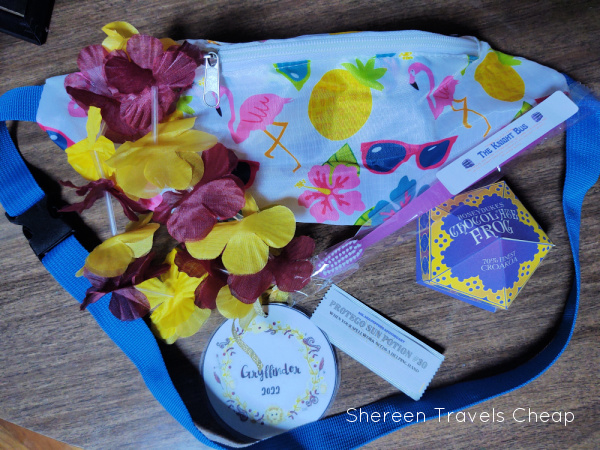 But even the people who don’t win still win, because everyone goes home with a themed goodie bag as well. This year I found these dumb tropical fanny packs, instead of the usual gift bag, and filled them with Chocolate Frogs (a goodie bag staple), a packet of emergency Sun Potion, and a pre-pasted toothbrush from me, the Knight Bus conductor, because I thought that was hilarious and also we don’t know if they toothbrushes Stan gave passengers required toothpaste or water or not. 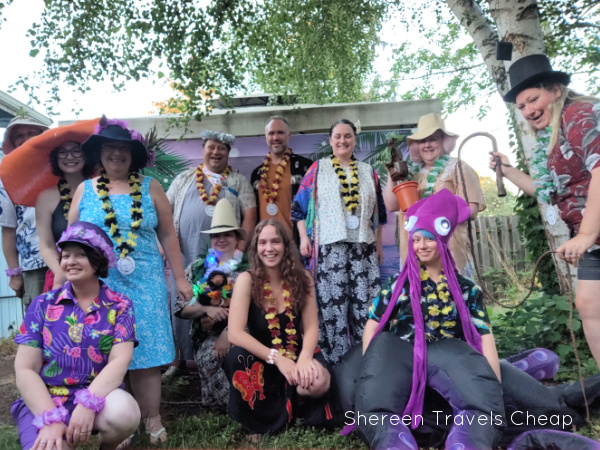 This year is our first in-person year we’ve done a costume contest with a trophy. Overwhelmingly, our friend Jay, dressed as the Giant Squid on vacation in the bottom right, was voted as best costume, so she took home a themed trophy with a tropical bird on it. 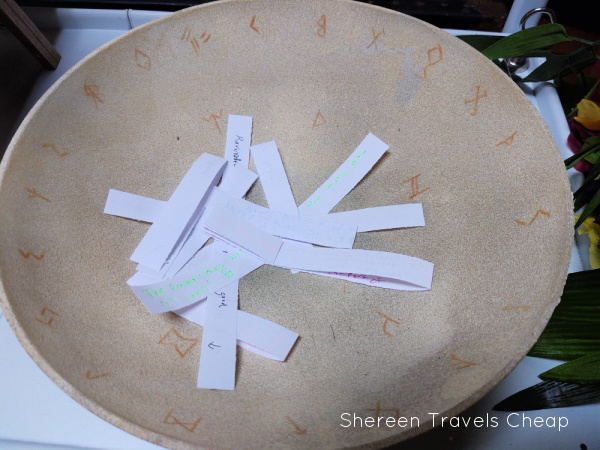 I love to end the party on a high note, so once we’ve announced winners and done all the other end-of-party things, I pass out paper slips and ask people to add a memory to the Pensieve. They can write their favorite part of this year’s party or why they love Harry Potter. I keep them all to read later. They don’t sign them, so they are fun anonymous memories.
I hope you enjoyed a little peek into our party. I can’t wait to start planning for next year and for my birthday ugly wizard sweater party. What is the food or drink from the magical world that you wish you could eat or drink in real life?