Nancy Pelosi is a bitch. And in saying that I’m actually being sexist against female dogs, since every one of them I’ve ever met is a higher quality individual than Pelosi. 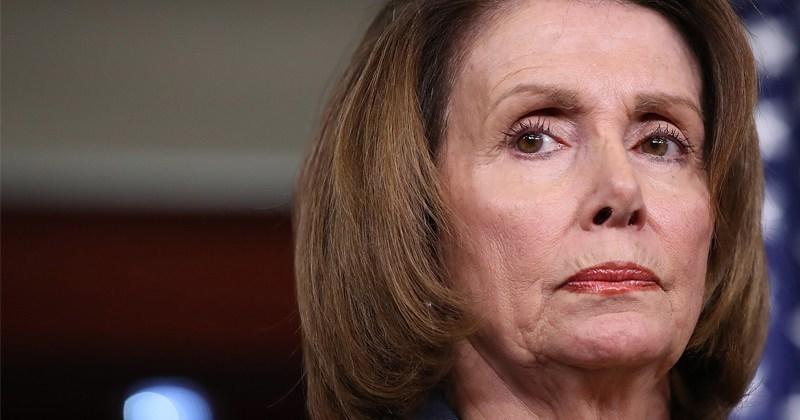 So, my apologies to dogs everywhere.

Just when you thought this power-mad harpy couldn’t sink any lower she responds to a simple question from a reporter with the kind of lame, stuttering virtue-signaling that has become her signature move, to attack when confronted with the truth.

This screed is a masterclass in diversion and doublespeak. Her self-righteous anger is a dead giveaway that she was lying about her motivations for proceeding with this impeachment while scolding the CSPAN reporter who asked the question like he was an impudent child.

If there is one thing Nancy Pelosi hates it is being called a liar.

She’s the ultimate keeper of the status quo, of the political order as she sees it and she has determined it shall be.

But she damns herself by wrapping herself in the false flag of her Catholicism. The false flag of her love for humanity. She is so desperate to deflect away from the truth that she does, in fact, hate the president and all that his election represents, she uses that to debunk the idea that she can hate anyone.

You know, except for all those unborn children that she advocates murdering or the people overseas she spends zero time stopping from being bombed by the administration.

This coming from the woman whose own daughter described her as capable of cutting off your head and not know you’re bleeding.

So, we all have to suffer because of this outrageous woman’s all-consuming love for humanity? That’s what she’s trying to sell now?

In a word, yes. The mask slipped when she had to run back to the podium to look into the camera and unconvincingly proclaim her love of children. And that she’ll fight anyone who gets in her way, clutching her rosary the entire time.

The tough broad act plays well with the bi-coastal shitlib set but the rest of us just look at her and shake our heads wondering who in the holy hell does she think she’s fooling with this stuff?

That thin veneer of compassion masks a cold and cruel calculation and psychopathology which is abhorrent to anyone with any shred of a soul left.

The sad truth is that Pelosi in her near-dementia might actually now believe some of this stuff she’s spouting. Here she does a CNN Town Hall in which she parrots the current climate hysteria saying that civilization itself depends on removing Donald Trump from the White House.

Even if this is true, and this is how she sees herself, acting out of a love for humanity rather than her own narrow interests, then she’s simply a classic villain archetype who is willing to break a few eggs to make her omelette.

And Pelosi, like the people she ultimately represents, are telling us that they will ‘love us all to death‘ to achieve their goals. It’s the most sick and twisted form of manipulation possible.

She’s morphed from the tough broad from San Francisco to the epitome of Toxic Femininity, the over-bearing mother archetype. And any threat to her power will be met with the cruelest counter-attack.

And Donald Trump is her R. P. McMurphy.

And in every way Pelosi knows that she’s locked in an existential battle for control over the future of America. She knows that she’s been tasked with delivering results on destroying Trump and if she doesn’t she’ll be cast aside.

No rational person can actually think the world is going to end in twelve years when they take even a cursory look at the climate data. But Pelosi is an order-taker not an order-maker in the hierarchy of political dominance.

And the call has come from above her pay-grade to sell this climate hysteria as the way to keep the program on track to finish the globalist’s dream of universal serfdom for us and perpetual power for them.

That’s your tell that Pelosi simply does what she’s told. It’s her job to sell whatever it is she’s been told to sell.

Every religion has it’s apocalypse story and the latest one from the Climate Crazies is this insane notion that time has run out and we need to act now or face extinction.

You know someone is lying to you when they only present you ultimatums, which are always a false binary choice. Follow our prescriptions or we’re all going to die!

And Pelosi truly is the enforcer of this edict.

In her heart she knows this impeachment process is a sham. She knows the premise is faulty and the results for the Democratic Party will be catastrophic. She can see the poll numbers.

But in her single-mindedness to save the world from itself, Pelosi will do everything she can to force us wayward and mentally-ill citizens back into her institution because her cause is righteous.

That’s why it’s now a life or death struggle to get rid of Trump. That’s why she’s willing to sell Climate hysteria and that’s why she lost her mind when asked the simplest of questions which she could have brushed off with a wave and a “No.”

Her vehement denial is her admission of guilt. For a moment, Speaker Ratched lost control and the results were a glimpse into the depths of her evil.

Loading...
"Not by might, nor by power, but by my spirit, saith the Lord of hosts." Zechariah 4:6
Read it..
BEFORE IT'S NEWS
SIGN UP FOR OUR NEWSLETTER
Today's Top Stories
Q News - Martial Law! What Aren't They Telling Us Regarding the Secret Takeover? - Great Video!
Robert David Steele: Extraterrestrials, Restore Paranormal Abilities, Free Energy, GoogleGestapo, Surveillance Capitalism and Web 3.0
Breaking: Military to Jam GPS Signals Across East Coast Through Jan. 24th - FBI Asserting Imminent Domain to Seize Night Vision Devices From Distributors! +Video
Behaviors Adults Adopt Who Have Experienced Childhood Emotional Abuse (Videos)
Trump Lies His A$$ Off to Advance Nuclear Conflict/NWO Genocide
What Are They Hiding? Why Aren’t More Doctors Prescribing Oxygen? (Video)
POTUS Has Negated Governor Northam of Virginia! Great Dave Hodges Video!
Breaking: Democrats Conspiring to Stage False Flag Bloodshed on Jan. 20th in Virginia! “Charlottesville 2.0” – In Order to Ignite a Civil War & Mass Chaos! +Video
Dave Hodges & Bob Griswold (1/17/2020): Virginia Gun Confiscation is Designed to Become the Pretext for Civil War! and Much More...
Breakthrough for Vaccine Laws! Vaccines Cannot Be Lawfully Forced Upon the People! People Not Government in Charge of Constitution!
Loading...
Featured
Facts About Lucid Dreaming & Tips For Inducing One
Virginia 2nd Amendment Rally – Updates and Inside Information
POTUS Has Negated Governor Northam of Virginia! Great Dave Hodges Video!
The Untouchable: The Slow Fall of a Hollywood Heavyweight (Videos)
Trump Lies His A$$ Off to Advance Nuclear Conflict/NWO Genocide
After Investigating 1,000 Near Death Experiences, This Author Came To The Conclusion That Life After Death Is Very Real
Open Carry Transforms into Open Tyranny in Virginia as Judge Rules Second Amendment Null & Void in State Capitol
Operate Eliminate 2nd Amendment Movement! A Special Report on the Covertly Sabotaged Virginia Gun Rally!
Jesse Ventura: WW3 Iran Is Out for Blood - We've Been Itching for a War With Iran
X22Spotlight Report: The People Control Change, Cannabis Is Just the Beginning! Penny White Video